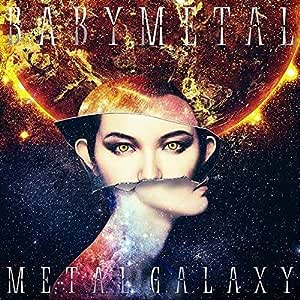 さらに初回生産限定 SUN盤・MOON盤はアナログサイズジャケット仕様で、それぞれのコンセプトに沿ったパッケージとなります。
ミュージッククリップDVD付属の初回生産限定盤、アナログ盤のリリースもあり、さまざまな楽しみ方でメタルの銀河の旅を堪能できるアルバムDEATH!!
We are on an odyssey to the METAL GALAXY. Welcome to the world of BABYMETAL!!

Toby Hagen
5つ星のうち5.0 Babymetal have done it again, and have truly mastered their craft!
2019年10月11日に英国でレビュー済み
Amazonで購入
This is an album of 3 acts.

In Act I, introduced with 'FUTURE METAL', we are taken on a musical odyssey, across the titular metal galaxy if you will, with every track having it's own unique sound from around the world. 'Shanti Shanti Shanti' has an Indian vibe for example, 'Oh! MAJINAI' is defiantly Nordic, and 'Night Night Burn!' is seething with Latin sounds. 'Elevator Girl' has English lyrics. This is Babymetal at their most experimental, and for the most part it very much succeeds in what it's trying to do; embrace the worldwide fanbase and apply the Babymetal magic to metal genres you'd never expect to hear them touch. The stand out track here is the RnB-tinged 'Brand New Day', and they would be crazy not to push this as a single release.

Act II opens with 'IN THE NAME OF', which will be familiar to anyone who saw them touring during the dark days of 2018. In the middle act, we are bestowed with Babymetal as we've always known them; this isn't to say that they're resting on their laurels and being lazy, because there are some absolutely brilliant songs here that feel like a celebration of their journey from being kids making their first album to adults who have defied the odds and continued to prove that they are worthy of respect from the metal music community. 'Kagerou' was played as a Su-Metal solo song during their 2018 tour to give Moa-Metal and the other dancers a break, and it was a song I dug but wasn't especially thrilled by until I heard it as a studio track for the first time today and it's another highlight of the album.

Act III brings the album to a close with a trilogy of songs that is an absolute tearjerker, starting with one of my all-time favorite songs 'Starlight' which is an ode to the passing of loved ones. It then moves into the opera-esque 'Shine', before finally ending with the sublime 'Arkadia'... I wont lie, "For your dream! For your faith! For your love!" and "So now, no more tears! No more pain! No more cry" in the chorus had me bawling my eyes out (I'm a nut for songs that convey empowerment to the listener and encourage then to never falter in their ambition and determination to succeed). This closing act is the band making it understood that they have mastered the craft of Babymetal; they're here to stay, their fanbase is ever-growing despite people STILL dismissing them as a mere gimmick, and their music will continue to spread positivity and joy to anyone willing to listen.

It's not perfect, but it is absolutely brilliant. Its mature, its confident, and it's so much fun! Babymetal have done it again, and it was well worth the wait!
続きを読む
22人のお客様がこれが役に立ったと考えています
違反を報告
レビュー を日本語に翻訳する

S. Lornie
5つ星のうち5.0 Solid Third Album
2019年10月11日に英国でレビュー済み
Amazonで購入
As someone who fell in love with Babymetal the moment their debut album was released in the UK, I was admittedly a bit worried about this third album. It's usually this point where we truly find out if band like Babymetal are simply a short novelty or a proper group, built to last. With the latest release Metal Galaxy, the band prove once again that they're no novelty and have released another fun solid release.

Metal Galaxy, is one of those albums where it doesn't necessarily provide us with anything ground breaking, it instead gives us more of the same with just enough tweaks here and there to provide us with something fresh. The songs on the album all have their different sounds and personalities and it is by far the albums best quality. If you look at the singles, Distortion, Elevator Girl, PA PA YA!! and my personal favourite, Shanti Shanti Shanti, they're all very different from each other. The first two are the traditional Babymetal rockers, showing resemblance to the likes of Dragonforce etc. Then there's PA PA YA!! hits on hip hop a bit and Shanti is a big Indian like affair with a very distinct groove. This is common theme through out the album and you'll hear touches of Spanish music, straight up pop and even some jazz.

You could call this album eccentric and you would be very right. It's a bit jumbled in places and I can imagine it might put some people off, those types who only want to hear straight up heavy metal. I can understand where they're coming from too. But as a musician who loves all different styles of music, I love hearing bands branch out like this and it's easily the best thing going on the record.

From a technical stand point, Metal Galaxy has been very well produced. It's not too loud and it's not too compressed. There's no sign of audio artifacts from loudness and sounds very nice cranked up. It's about the same level as the previous two albums, which weren't bad by any means. The production is quite nice and really helps smooth out all the quirkiness. The band playing the music sounds as tight as they did on the last two albums and people will get a nice kick out the heavy riffs and delicious guitar solos. Su-Metal as a vocalist has improved considerably since the first album. Her voice on Metal Galaxy sounds a lot more mature and it's great. She has really grown into a fantastic vocalist.

As an album, I would say that Metal Galaxy isn't quite as good as its predecessor, Metal Resistance. I personally think that album was a more focused affair but Metal Galaxy still comes out very strong and is well worth purchasing for fans of the band, or for someone who simply wants something different. For a third album by a band that has caused so much controversy, I think they've done a great job of staying the course and I really enjoyed it. Now I just have to wait for the tour. \m/
続きを読む
5人のお客様がこれが役に立ったと考えています
違反を報告
レビュー を日本語に翻訳する

Milan Budzak
5つ星のうち3.0 Disappointing
2019年10月13日に英国でレビュー済み
Amazonで購入
I like Babymetal and consider myself as their big fan. I've listened them since 2012. I really love previous two albums, especially Metal Risisatnce. But, unortunately, I cannot say it about Metal Galaxy. I couldn't wait the new album but after listening it I've been very disappointed. The album is a bit boring for me. If I reduced the album on 8-9 tracks it wouId be at least 4 stars mini album. I've definitely couldn't get into Future Metal (one the worst thing I've ever heard), Oh! Majinai, Brand New Day, Night Night Burn and In the name of. I'm still not sure with DA DA Dance (no bad but it's ruined by stupid computer generated 'music'). On the other hand, Arkadia is a great song, one of the best Babymetal's songs. Overall, I evaluate the album as average (after first listening I got this album two stars, later added one star more). In my opinion this album is great munitions for Babymetal haters argumenting that Babymetal is not metal band or even band.
In my point of view, Babymetal is becoming more pop idol group than metal one (technically, they are an idol group). There were great balance between pop and metal elements in previous two albums but pop elements dominated over metal ones in Metal Galaxy (just mine opinion). Next time I will more careful about purchase next album.
I wish their next album would be close to Metal Risistance but do not believe Amuse release something similar.
続きを読む
5人のお客様がこれが役に立ったと考えています
違反を報告
レビュー を日本語に翻訳する

This album is great, and full of knock out hits.
I'll admit one or two songs didn't click with me on the first listen (Oh! Majinai, I'm looking at you), but after being addicted to the album for nearly 2 weeks now, there isn't a single song I'm not in love with.
So much variation in songs, especially with the collaborations with vocalists from other bands.

It's sad that Yui is no longer a member of the group, but they really kicked it out of the park with this one.

Only one suggestion; Find the Japanese release of the album.
That version has an extra 2 songs which are honestly the best on the album.
続きを読む
1人のお客様がこれが役に立ったと考えています
違反を報告
レビュー を日本語に翻訳する

Jack Stringer
5つ星のうち5.0 Babymetal are back!
2019年12月7日に英国でレビュー済み
Amazonで購入
Wasn't too sure about Babymetal originally, I would listen to there music sometimes but this is different! Babymetal has raised the bar with Metal Galaxy, the music is even better than their last two albums!
続きを読む
違反を報告
レビュー を日本語に翻訳する
すべてのレビューを参照します
Amazonプライム会員ならお急ぎ便、日時指定便が使い放題
さらに、映画もTV番組も見放題。200万曲が聴き放題 。クラウドに好きなだけ写真も保存可能。
> プライムを無料で試す