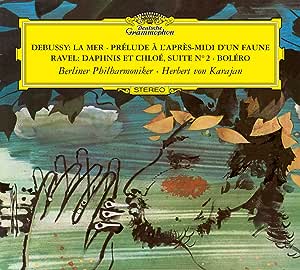 John K. Gayley
5つ星のうち5.0 in a class by itself
2012年7月7日 - (Amazon.com)
Amazonで購入
What interesting, great interpetations. I was one of those naysayers who, for going on 30 years, had declared "Karajan and Debussy" as a contradiction in terms. Wow, I was wrong. The other reviewers have aptly described the merits of these interpretations better than I can..but in a phrase, these are just rich, luscious readings like few others.

Its hard not to collect different versions of "la mer" (they just follow some of us home), and I revolve between 4 or 5 of them with great pleasure...Ansermet, Baudo, Cantelli, and (yes I admit it) Ormandy. But I'll be coming back to HVK much more often. In addition, the "Prelude" really is peerless...some might consider that the best piece on the CD.
So, go ahead...take the plunge!

G. Rogers Jr.
5つ星のうち5.0 Excellent vKarajan PRECISIONIST reading....
2012年6月27日 - (Amazon.com)
Amazonで購入
The detail with this performance of "Prelude" is arresting indeed!! As with the La Mer & the D-C Suite# 2 these pieces NEED this detail as well - which is often glossed over by other conductors. No one does this better than vKarajan with the BP. And, it's hard to believe, he even outdoes himself with the digital remake released in 1986 including the Original-Image-Bit-Processing remastering! If you haven't done so check that one out! 5-Stars through & Through!!
続きを読む
4人のお客様がこれが役に立ったと考えています
レビュー を日本語に翻訳する

Santa Fe Listener
5つ星のうち5.0 Another of Karajan's surprising talents
2008年9月19日 - (Amazon.com)
Amazonで購入
To celebrate Karajan's centenary, DG has been re-releasing some of his most notable recordings with their original LP jackets. Casual observers of Karajan's career -- and those who denigrate it, of course -- would be surprised that Debussy and Ravel count among his best composers. In fact, they do -- witness not just this collection but an astonishingly evocative and sensitive Ravel CD for EMI. What makes Karajan such a superb French conductor isn't just precision and clarity, two virtues we associate with this genre, but his poetic imaginaiton.

Enough said to true believers, and I suppose nothing would be enough for naysayrs. The remastered 1965 analog recording sounds gorgeous in its detail and warmth; the Berliners play like gods, and Karajan's contorl seems superhuman. But that's what carpers complain aoubt, isn't it (even as they extol Toscanini for the same thing)? So be it. This CD deserves to stand among his classic recordings.

news4u
5つ星のうち5.0 Parlez-vous von Karajan?
2012年1月28日 - (Amazon.com)
Amazonで購入
Can't go wrong here (who'd have guessed that von Karajan could sound so French?!) But I still prefer Haitink in Debussy and, surprisingly, Ozawa in Ravel. Neither of whom, of course, is French, either. They just sound more evocative in this music to me.
続きを読む
1人のお客様がこれが役に立ったと考えています
レビュー を日本語に翻訳する

Thomas A.
5つ星のうち5.0 timeless and beautiful
2015年3月24日 - (Amazon.com)
Amazonで購入
Herbert Karajan was the greatest conductor to record, along side of Neville Marriner. Karajan has done the Debussy Prelude justice, along with the Haitink, which may be more powerful, oddly enough. But La Mer in Karajan's hands is powerful and expansive, yet subtle and lovely. I bought this mainly for Ravel's Bolero, and that is wonderful and quiet version, not as boisterous as other versions. And i had never heard Daphnis and Chloe but a great surprise, not knowing the piece. This cd is an excellent value and very much worth twice as much to pay. You'll have this one in your collection until the end of time.
続きを読む
2人のお客様がこれが役に立ったと考えています
レビュー を日本語に翻訳する
Amazon.comのカスタマーレビューを見る(17) 5つ星のうち4.3
Amazonプライム会員ならお急ぎ便、日時指定便が使い放題
さらに、映画もTV番組も見放題。200万曲が聴き放題 。クラウドに好きなだけ写真も保存可能。
> プライムを無料で試す