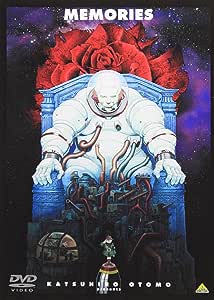 Perere
5つ星のうち5.0 Three Stars
2016年9月27日に英国でレビュー済み
Amazonで購入
I don't think I'm breaking any new ground by saying how amazing this product is.
No scratches, no dents, no problem with the DVD region. It works just fine.
I don't regret buying this product, I do however regret that I didn't buy it sooner.
続きを読む
違反を報告
レビュー を日本語に翻訳する

Chris Morse
5つ星のうち3.0 Worh the price
2005年3月17日に英国でレビュー済み
Amazonで購入
This little anime, or really, 3 anime's can now be had in some bargain basements.
It did'nt get a lot of attention when it appeared, and is a strange mix.
There are three 30+min films on the disc, all very different from each other.
Quote:
Magnetic Rose: Based on a manga short by Otomo, two space travellers following a distress signal are drawn into a magnificent world created by one woman's memories. (Directed by Koji Morimoto)
Stink Bomb: A young chemist accidentally transforms himself into an unstoppable biological weapon set on a direct course for Tokyo. (Directed by Tensai Okamura)
Cannon Fodder: A day in the life of a city whose entire purpose is the firing of cannons at an unknown ememy. (Directed by Katsuhiro Otomo)
Magnetic Rose has some genuinly creepy moments in it, but by the end I was loosing interest in who lived and who died. The revelation at the end was also a real non event as I had taken it for granted that it had happened anyway.
Stink Bomb was very good, and had a lot of humour in it, which does'nt usually translate very well to the west, but in this it did. I really would have liked to see more of just how they planned to stop this biological nerd.
Cannon Fodder had a very different feel to it and a very different animation style as well. The story, though I felt, had been written for just one line at the end when the little boy asks his Dad who they're firing at. The reply comes, "when your older, you'll understand".
All in all for the price this can be had for a good buy. Could easily be watched again, as most anime's can, especially if they are subtitled, as you now have a gist of the story and can sit back and enjoy the artwork more.
続きを読む
6人のお客様がこれが役に立ったと考えています
違反を報告
レビュー を日本語に翻訳する

Came as advertised, arrived earlier than expected, in only 4 days! Considering this is my first order from amazon.uk to Serbia, I was not disappointed.
続きを読む
違反を報告
レビュー を日本語に翻訳する

Darren Grey
5つ星のうち5.0 5 stars just for Magnetic Rose
2013年9月6日に英国でレビュー済み
Amazonで購入
Magnetic Rose is a beautiful and haunting sci-fi tale that goes beyond the normal limits of its genre. The other two stories are interesting in their own right, but it's Magnetic Rose that really carries this DVD. Any sci-fi or anime fan should check it out.
続きを読む
違反を報告
レビュー を日本語に翻訳する
すべてのレビューを参照します
同様の商品をご覧になりませんか？ こちらのリンクで参照ください。memory
Amazonプライム会員ならお急ぎ便、日時指定便が使い放題
さらに、映画もTV番組も見放題。200万曲が聴き放題 。クラウドに好きなだけ写真も保存可能。
> プライムを無料で試す