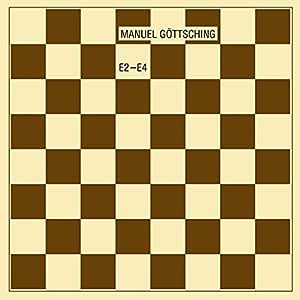 moog_man
5つ星のうち5.0 A first for Japan, and the world
2010年6月22日
Amazonで購入
Manuel Gottsching performs his seminal uni-composition from 1981, "E2-E4". A rare occurence, despite approaching a three decade history. In fact, the only time he has chosen to play "E2-E4" in its entirety - and for a very fortunate Japanese audience - to commemorate the 25th anniversary of the release, was in 2006. To make this release equally special, it has been produced as a limited edition of just 3000 units.
Close followers of Gottsching will know most of the above so I'll focus the rest of this review on the product.

Firstly, Gottsching has evolved the original composition in subtle ways that do not interfere with the original. Rather, they serve to enhance this enchanting piece of music. There are samples from the original recording combined with new surface melodies and cross rhythms, all framed within the existing structure. If you are familiar with the 1981 recording, this immediately becomes evident when you listen to the CD. He has also interspersed elements of an edited version of "E2-E4" that was performed with the Zeitkratzer ensemble in Germany. The acoustic instruments contrast very effectively against the more recognised electronic rhythm track.
The DVD contains the same performance, plus a short 4min excerpt, depicting Gottsching signing autographs and sightseeing the country. Directed by Myriam Abeillon, the camerawork is very different to most music videos. It focuses almost exclusively on Gottsching performing "E2-E4" for the first time. The effect is to create a very intimate perspective of the music. The film really takes off when Gottsching begins to play his guitar on top of the alternating two chord structure that has now embedded itself in your head. Atmosphere shots of the crowd only appear towards the end, showing a sea of blissed-out faces gently dancing in unison as dawn begins to break over Mt. Fuji. Pure magic.

Presented in a DVD booklet housing both discs, a 16-pg booklet plus Japanese translation insert, this is a well produced package that serious collectors would be proud to own. The cover art riffs on the original chess board design; much like newer depictions of the ubiquitous Burberry check; thereby keeping it fresh and relevant.
The booklet features sections on the background to "E2-E4", the performance at Metamorphose festival, a timeline biography, equipment breakdown and finally, a chronological discography. In short, everything you need to know about this very modest and intriguing musician.

In the late '80s, a whole generation of Manhattanites danced to "E2-E4" at the Paradise Garage. DJ, Larry Levan would play the record at the beginning of his set, and often towards the end of a lengthy eight hour marathon. Consequently, many of today's contemporary dance music producers absorbed this unique music and it has propagated its DNA throughout modern dance music. This is but one example of the huge influence "E2-E4" has enjoyed on our lives. Long may it continue.