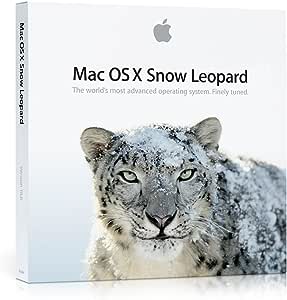 Maverick - eye
5つ星のうち4.0 Upgrade from Tiger to Mac OS X (10.6.3.) on an Imac intel manuf date late 2006
2013年6月1日に英国でレビュー済み
Amazonで購入
This is not a detailed review just to demonstrate that this OS upgrade can be achieved using £30 disk. Note that none of the Apple applications are updated. Prior to applying the disk I upgraded my Ram to 2.5GB from 1 GB. After backing up my computer using SuperDuper I inserted the OS disk into the Imac and let it run. There are options at the beginning but I selected the OS upgrade, you can select other options for additional software, these can be done later. I think the whole process took about 45 mins, there were a few heart-stopping moments when the screen went grey then blue a number of times and nothing appeared to be going on. Eventually the new look desktop appeared and all was well. There are a enhancements to applications including Mail and the web browsers so these need to be checked and options set. I have tested most of my standard applications and they seem OK.
The reason for the four star rating is that one of my printers doesn't work - a Sony DPP-EX7 - because the drivers supplied on the Sony disk no longer work with the new OS. A real pain, I have searched the web to new avail.The major incentive for me to upgrade from Tiger was the fact that some new software for photo-enhancement (Silver Efex Pro 2) could not be tested with Tiger.
続きを読む
1人のお客様がこれが役に立ったと考えています
違反を報告
レビュー を日本語に翻訳する

J. C. Laughton
5つ星のうち3.0 It's good, but not that good.
2009年10月11日に英国でレビュー済み
Amazonで購入
Firstly, mechanics. This comes in a very small package (not much more than a fat DVD envelope and a leaflet) and the DVD itself was badly out of balance (ie it makes a racket in the drive.) Other than that, it installed without a hitch, and you can go away and do something else whilst it does (like have a four course meal.)

The only problems I noticed after installation were one or two gratuitously changed application preferences, a shareware application which no longer works and HP printer drivers replaced with Snow Leopard ones (adding some functionality, and taking some away.) As for the much vaunted speed improvements: none that I've noticed.

Can't really criticise it, or wholeheartedly recommend it. Bit of a non-event, in fact: leave it till you really need to upgrade.

(For reference I installed it on a five-month-old, 2.93 GHz Intel iMac with 4 Gb memory.)
続きを読む
1人のお客様がこれが役に立ったと考えています
違反を報告
レビュー を日本語に翻訳する

D. Iddon
5つ星のうち4.0 Great, but little change.
2010年3月8日に英国でレビュー済み
Amazonで購入
I'm pleased with Snow Leopard, no doubt about it. The installation cleared valuable disk space from my primary Hard Drive, and startup seems that little bit quicker. Apple assures us that the investment is more for the future than the present, with computing gradually moving the way of 64bit. For that reason, though, the user doesn't really get the chance to see too many major overhauls in this release of the OS. The additions are nice. Previewing videos in icon view, browsable stacks, and the change from white contextual menus to transparent black ones just add a little more 'sheen' to the whole experience.

Quicktime X is a mixed bag. While I actually like the new appearance of the app, it feels very disjointed from the OS, with it's 'glass' menu bar that disappears once you move the mouse away. The app also lacks the support of many features of Quicktime Pro, which would have made usability much improved. Personally, I like to have as few apps as possible for my needs. With Quicktime X coming as part of Snow Leopard, I now feel the need to have both QTX and the standard Quicktime (which is now stored in the Utilities folder) on my system. If only Apple would make QTX more feature-full, and integrate it's new appearance into the OS, it would be much more at home on any Mac system.

On a day-to-day basis, Snow Leopard does seem more stable than Leopard. I've had absolutely no usability problems thus far, my system seems slightly more streamlined an experience, and for the price can have no complaints. It's definitely worthy of a purchase, even if there aren't too many major new features or overhauls.
続きを読む
2人のお客様がこれが役に立ったと考えています
違反を報告
レビュー を日本語に翻訳する

AlphaDog
5つ星のうち5.0 Quick and so far so good.
2010年6月20日に英国でレビュー済み
Amazonで購入
I installed this on an external 256GB SSD drive connected via Firewire800 to my MacBook Pro with 2.5GHz Intel Core 2 duo so I could experiment with it without risking all the travails so many of the negative reviewers have complained of.
My Solid State Drive (SSD) was already amazingly fast with Leopard 10.5.8 what with the boot time less than half of the conventional drive and opening and closing applications is appreciably quick. After I installed this Snow Leopard, everything seems to go swimmingly. I have yet to explore many of the bells and whistles of the Snow Leopard upgrade, so I can currently only appreciate the 64bit processing.
I am almost certainly hampered by the Firewire 800 connection, but I decided I should remain running on an external drive until I'm confident I can switch out the original drive for the SSD (I'm running on it now). I have also upgraded to the new 10.6.4 yesterday; still good.
So far so good. No problems. Stay tuned.
続きを読む
違反を報告
レビュー を日本語に翻訳する

A.S.
5つ星のうち5.0 Amazing
2010年5月2日に英国でレビュー済み
Amazonで購入
An amazing product. I was not sure whether to buy this at first as I had not long been running Leopard but I had many recommendations for this so I went ahead with it. The OS is just stunning, especially comparing to Windows (I'm not a fanboy of either). It was worth buying a MacBook just to experience this operating system. The only problem I have with it is that it's not that much different to Leopard 10.5. I've noticed significant speed changes since upgrading but no completely new experiences. But comparing this £20 upgrade compared to a £100+ Windows upgrade for even less, it is a very good bargain indeed. In a way the price of this makes up for paying so much for the hardware, but worth it.