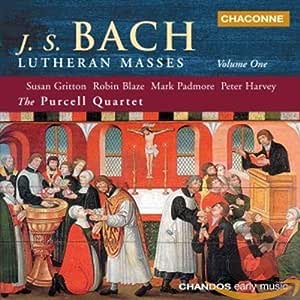 Lutheran Masses / Mass in a Major

In 1979 it was inconceivable; even in 1989 it seemed radical if not ridiculous. By 1999, however, performing Bach's choral music with one singer and player per part had started to catch on. Around 1982 Joshua Rifkin first argued that Bach composed most of his sacred music for an ensemble of soloists; when Rifkin recorded the Mass in B Minor that way, he had few defenders and many outraged detractors. Gradually other Baroque specialists such as Andrew Parrott and Jeffrey Thomas tried this approach; now the (augmented) Purcell Quartet presents Bach's four brief "Lutheran" Masses with top-notch soloists--Volume 1 is not only a sterling example of one-on-a-part Bach, it's an outstanding performance, period. The singers blend beautifully with the early instruments, Susan Gritton (the only mainstream opera singer of the bunch) in particular keeping her vibrato well under control. Once you hear, say, the Kyrie of the G Minor Mass, in which each singer in turn takes up the winding fugue subject from the first oboe, or the A Major Mass, in which the flutes take up a fugue subject from the singers and (for once) are audible, a choral performance of these pieces may seem odd. --Matthew Westphal

Gio
5つ星のうち5.0 No question! This is the one!
2009年2月1日にアメリカ合衆国でレビュー済み
Amazonで購入
OVPP (one voice per part) is no longer a rare performance option; this recording in two volumes of Bach's four Lutheran masses demonstrates why: you can hear the parts! and you can hear the instrumental lines! and the voices sound like human voices! Intonation is sharper (assuming the singers are good enough) and rhythms are more incisive. Scholarship does show that OVPP was more the norm in Bach's musical milieu than large choirs, but that's a musicologist's problem. My judgement is based purely on listening.

I'm very fond of the Philippe Herreweghe performance of these masses, for a number of reasons. Herreweghe's chorus is amazingly tight and expressive, and the big sound he coaxes from them is surely impressive. His performance has been re-released as part of a 4-CD box, which I've recently reviewed. However...

... this performance by the Purcell Quartet (masquerading as a chamber orchestra), with three very fine "early music" singers and one operatic soprano who knows how to sing in such an ensemble, is a good deal more exciting. I suspect that it will be too exciting, too upbeat, for listeners who want their Bach to sound like the choir they heard in church when they were children. This is not a solemn, pious performance of Bach. It's a Revelation, though... a revelation of how Italianate Bach's music was, even in these small Latin masses for Lutheran services on certain holidays.

Fortunately there are samples available here on amazon. Plug in your best headphones and listen! I'll bet you'll wind up buying.