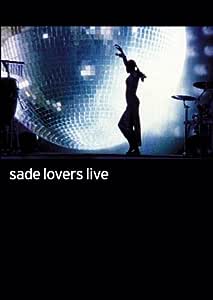 The DVD menu, while well designed, is frustratingly slow. If you have the patience, you'll find some largely extraneous backstage footage of Sade and her band, a nice gallery of black-and-white photos, the excellent "King of Sorrow" video, and "Message to Sade," essentially 10 minutes of adoring fans offering homages and confessions of love to their heroine. --Sam Graham

A. E. Hardman
5つ星のうち5.0 Sublime
2014年2月8日に英国でレビュー済み
Amazonで購入
The music of Sade comprised much of the soundtrack to the affair I had with the woman who is now my wife of over 20 years, so it will always have a special significance to me. For some reason however the group dropped off my radar and I have just discovered their later releases. Having bought the excellent Lovers Live CD, I didn't need much encouragement to add this live DVD to my collection. A straightforward recording of a concert from her 2001 North American tour, this is one of the best live music DVDs I have ever seen.

Firstly the woman herself: that exotic beauty has hardly dimmed, and if her statuesque body has rounded out to a tiny degree that is no bad thing: she is completely ravishing to look at and you can hardly take your eyes off her. Her voice remains the silky, breathy thing of beauty it always was, and maturity has made it even more expressive.

Amazingly, the band lineup is unchanged from the original album, and they have the tight, close knit sound which only comes from those years on the road together. The musicianship is wonderful and complements her voice perfectly without ever threatening to swamp it. There are plenty of superb instrumental solos to enjoy as the band show off their considerable talents. The backing singers are unusually restrained support her voice without competing with it.

The stage show is simple but dazzlingly effective. Individual solos are flooded with light as Sade herself appears in silhouette. But otherwise the focus stays where it should be - on her. Meanwhile the songs are enhanced by the images appearing on the rear screen.

The only tiny criticism of the whole package is that there is too much footage of the crowd: this is irritating when all you want to see is happening on the stage: apart from this the DVD is pretty perfect really.

Almost 30 years after the release of "Diamond Life" Sade is still the coolest female on the planet.
5 stars? - nowhere near enough.
続きを読む
1人のお客様がこれが役に立ったと考えています
違反を報告
レビュー を日本語に翻訳する

BlueSkyBob
5つ星のうち5.0 Sexy, sultry, soulful
2011年6月19日に英国でレビュー済み
Amazonで購入
Sade floated my boat back in the 1980's when I first got into her music. She was as good then as she is now on this concert production.
Her beguiling voice, sexy and soulful, is well suited to her presence and beauty. The musical backing is first class. All her hits are here, performed brilliantly.
She is a credit to the industry, and I feel hasn't had the recognition deserving of her.
If you like Sade, you will love this.
続きを読む
違反を報告
レビュー を日本語に翻訳する

S. Keeley
5つ星のうち4.0 Track 21
2012年2月20日に英国でレビュー済み
Amazonで購入
A few decades ago I remember thinking she was pretty good. So in my search for decent DVD concerts to pad out the collection i thought I'd give her a shot. You know how over the years you can hear good stuff, average stuff and naff stuff and at the end of it all there are maybe a handful of tracks that stopped you in your tracks. This would be a decent DVD even without track 21. But if like me, you have never heard it before, it's time you put that right.
続きを読む
1人のお客様がこれが役に立ったと考えています
違反を報告
レビュー を日本語に翻訳する