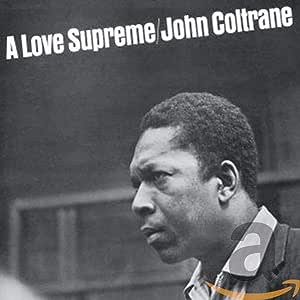 John Coltrane's masterwork is reckoned by many to be the greatest jazz album of all time. That this release contains a new mastering from newly discovered master tapes would be momentous enough; that the second disc contains the Quartet's only live performance of the suite at the Antibes Jazz Festival in 1965-oft-bootlegged, never released- and the long-rumored sextet performance of the opening movement with Archie Shepp and Art Davis is a flat-out revelation!

Anglian Traveller
5つ星のうち5.0 The 2002 `Deluxe' release of ALS; the best by far and the one to buy
2014年3月16日に英国でレビュー済み
Amazonで購入
It's now almost 50 years since `A Love Supreme' was recorded in Englewood cliffs, NJ. The 2002 `deluxe' release of John Coltrane's most respected musical creation is a beautiful thing, indisputably the best-ever edition of this classic work.

This release is sourced from an original copy-master discovered in EMI's vaults in London, dated March 1965. The equalization and compression issues which had always plagued the 1971 second-generation transfer (from which all previous CDs had been sourced) are not present on this 1965 copy-master, so this recording is as pure and original as we're ever likely to hear.

A second disk features a live performance of the suite at the Festival Mondial du Jazz Antibes in July 1965, together with two alternate takes (hitherto unreleased) each of `Resolution' and `Acknowledgment' from the original Van Gelder studio recordings in December 1964.

The 2-CD package is very tastefully presented in a 4-fold jewel case together with a 32-page booklet featuring a long essay from 2002 on the music by Ashley Kahn and a shorter one by Ravi Coltrane, together with several of Trane's inspired spiritual musings on God presented as poetry.

Overall, this is an exemplary package. The music itself may not resonate with you on first listening, but play it again and give it time; you'll soon come to love it, and appreciate why it has been so highly regarded for these past 50 years. Jazz has travelled a long way since 1964, but rarely has any other work been so inspired as ALS.
続きを読む
13人のお客様がこれが役に立ったと考えています
違反を報告
レビュー を日本語に翻訳する

Horse Birthday
5つ星のうち5.0 A fantastic edition of a landmark recording
2020年6月29日に英国でレビュー済み
Amazonで購入
A Love Supreme is one of Coltrane's towering achievements (there's more than one, suffice it to say!). If you want an easily-obtained and good quality version of this lovely album, look no further. The second disk with live takes is great too, serving as a more raw contrast.

Yes, it's quite hard-panned and will sound a little eye-popping on headphones, but you'll survive. This is ace.
続きを読む
違反を報告
レビュー を日本語に翻訳する

Rapt in Rainbows
5つ星のうち5.0 A perfect gift
2017年5月28日に英国でレビュー済み
Amazonで購入
Bought for my dad who is a big fan of John Coltrane and loves it. That's enough for me.
続きを読む
違反を報告
レビュー を日本語に翻訳する

Mr. F. E. Perry
5つ星のうち5.0 A Total Classic
2003年3月13日に英国でレビュー済み
Amazonで購入
John Coltrane was a giant on the tenor saxophone and this was one of his finest hours. The quartet is legendary. They work together like a perfect family. Coltrane's intense searching lifestyle eventually led him to explore the spiritual regions in the early 1960's and this 'spirit' informs the music. This is a classic album but we are also treated to a wonderful 'live' set too. Coltrane's playing on this is really amazing giving himself more time to stretch out his solo explorations/improvisations. It is largely structured according to the original but by no means simply a 'live' performance of the recorded work. It exists in its own right and the recording quality of this CD is better than the previous 'pirate' issue I owned. We're also treated to another two out-takes and finally to two sessions featuring Archie Shepp and another bassist. These last two are interesting but don't grab me as much as the rest of the CD. This is a classic album by a true giant playing jazz that goes beyond what mostly passes for jazz today and we get all the bonus tracks. It was such an important event that it's worth getting all the extra stuff and it's not too expensive either. Coltrane extended the range of the saxophone via harmonics etc whilst his style was certainly intense but, more than this, it was the language of the spirit - his spirit. The message from deep within his being needed to get out and he found the new forms of language necessary for this. In this sense his playing is authentic and truly original. He always has a tremendous sense of presence and in this piece, dedicated to The Source of All Love, every note is inspired by his heart-felt devotion - it's like a musical meditation. He played his saxophone so much every day of his life that his playing was a fine-tuned instrument to his inner life.
If you just wanted one Coltrane CD, or wanted to get to know him, then start with this CD and if you like it then check out all that happened later i.e. OM, Meditations, Transition etc.
続きを読む
16人のお客様がこれが役に立ったと考えています
違反を報告
レビュー を日本語に翻訳する