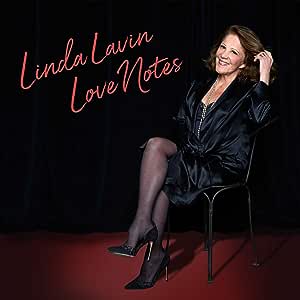 Mathew J. Russo
5つ星のうち5.0 LINDA LAVIN’S NEW ALBUM IS SINGIN’ AND SWINGIN’ PERFECTION
2020年4月1日にアメリカ合衆国でレビュー済み
Amazonで購入
Linda Lavin’s new album “Love Notes” dropped on Friday, March 27, 2020. This is her second album after “Possibilities.” Her first album was surf and turf and caviar with a glass of wine on the side. This album could easily have been titled “Singin’ and Swingin’ ” or “The Ballroom Album.” Not only do Linda’s vocals shine and soar as with her first album, but the pure composition of this album takes you on a trip that captures you every moment, and before you know it, it’s over. It’s a beautiful and fun roller-coaster ride of Americana that thrills the listener. The album’s only real criticism is that it could easily have had three or four more tracks because it ends as quickly as it begins. And who would not want three or four more tracks of this marvelous woman’s voice?

The album begins with Cole Porter’s “I’ve Got My Eyes On You” and also takes you to “You Do Something To Me.” Linda’s voice on this piece is the voodoo that she does oh so well. It’s upbeat and classy. Next up is Peggy Lee’s “Not A Care In The World.” She ups Peggy’s game and delivers a vocally perfect rendition that, humbly spoken, could easily surpass the original. Along with that song she sings “Shall We Dance,” the George and Ira Gershwin classic from the film of the same name with Fred Astaire… and she delivers the musical number in pure, high-class form into a modern album that still makes you want to dance. The third track is Sinatra’s “I Wish I Were In Love Again,” which she takes to a new dimension and higher heights, just like she did with “There’s A Small Hotel” from her first album. If the Chairman of the board were alive today, he would be honored (and perhaps a bit jealous!) of Linda’s version.

The dance then slows down a bit for the next feature, The Eagles’ “I Can’t Tell You Why.” The transformation of this song is a wonder to behold, a departure from the original taken to the next level that is cozy and warm and embraces you like a lover’s hug and goes beyond the original popular ballad by a well-known band. The duo-track transitions into the late jazz singer and pianist Blossom Dearie’s “I Walk A Little Faster” seamlessly. While Madonna tries to work Portuguese-influenced music into the mainstream with her latest album effort, Linda delivers the original Portuguese “Chega De Saudade” (which translates to “No More Blues”) to her audiences. This is said to be the first recorded bossa nova song and is also a bossa nova jazz standard. Linda has performed this song during her previous live concert tours, and now much to our delight, she has put down the track into a studio recorded version, along with the incomparable Billy Stritch singing with her.

The next song, “Stars Would Fall,” is an original song penned by Wayne Haun who is part of Linda’s album team. He has performed the song on his own album, and Linda’s rendition is one of the best songs on her album. This song is so beautifully written that I myself assumed it was a cover written by Cole Porter, or the Gershwins or someone of that caliber, and perhaps I’ve just never heard it. This is an amazing song, and Linda brings it to the mountain top and then hang glides you right into the sky and carries you on a gentle breeze with her performance. If Linda ever considered commercial singles or delved into the world of club remixes, this song could easily be the album’s first single, as it begs for it. After that, she moves to a very down to Earth, yet up-tempo rendition of master Duke Ellington’s “Squeeze Me (But Don’t Tease Me).” Here, she does again what is her brilliance… She takes a slower paced song and brings it to a new height with a refreshing flavor unlike others have done before.

“Black Cow” is a real treat and a gem of this album. She revisits what she did with her first album, by going back to a Donald Fagan and Steely Dan track. On the first album, she did “Walk Between The Raindrops” (This reviewer’s favorite Linda Lavin song) and she brings new life and identity to it all its own. This particular track “Black Cow” seems to step out of the album for a second, taking you from the ballroom back to the 1960’s… and it even has a sort of sound similar to the modern group “Swing Out Sister” in terms of its flavor. If all the tracks on this album were episodes, this song could be a strong candidate for a spin-off series. I would love to see Linda do an entire album (maybe her next one?) of songs like this.

If the group Post Modern Jukebox were to get together with Linda Lavin, “Ace In The Hole / Rap Tap On Wood” would be the result. This up-tempo number again features Billy Stritch with her on vocals, and these Cole Porter songs are delivered flawlessly as one composition. If the song “It Don’t Mean A Thing / I Got Rhythm” was chocolate, it would melt in your mouth like no other. Linda’s vocals are so intimate yet when she gets to “I Got Rhythm” she’s singing to an audience – and the two songs are tied so well together.

Before the close of this album, it should be said that Linda has an amazing team of people on this album. Linda Lavin and Billy Stritch have a magical, musical affair that is lightning in a bottle, of which I haven’t seen the likes of since Eurythmics, and possibly even more musical teams before them that I may too young to recite properly. Her producers Wayne Haun and Billy Stritch, the amazing Aaron Weinstein on violin and mandolin, Tom Hubbard on bass, Jeff Barone on guitar, Daniel Glass on drums, and Joel Key on banjo all deserve praise as this is a pitch and picture perfect production that stands as a poster child of what a high-definition adult contemporary production is and should always be. The album seems to almost close with “You Must Believe In Spring.” She performs this song true to original form, as it is from a 1967 French film “The Young Girls Of Rochefort” and has been also covered by Tony Bennett. It almost sounds as if this song could be a sort of starry sequel to her performance of “Two For The Road” from her first album “Possibilities.”

The final track of the album is “How High The Moon.” This album was so deep, that my only original criticism of this albums track order is that this album, because of its depth, almost requests the final song to be melancholy or a ballad… but having this final track be something upbeat was the perfect cherry on top, even now more than ever in the world we are living in – it’s the perfect fit. The lyric “Some where there’s music, somewhere there’s Heaven…” is the most appropriate lyric we could listen to right now in our estranged and somewhat uncharted times. And with that, the album comes to a high and celebratory close. A perfect finish line. The curtain draws and we have the close of the second Linda Lavin album.

I believe that “Love Notes” is Linda’s personal homage to some of her most favorite songs and songs of the past, which serve as an education and introduction to a whole new generation of fans, young and old. These songs each have a history. Some of us can remember them, and some of us are new to them and can experience them for a first time through Linda.

So with that, safely grab a dancing partner – or a family member, or a friend, or a neighbor… and bring the ballroom into your home, into your parlor, into your living room… even if you have to dance at a safe distance… Let Linda Lavin and her ensemble put a little happy in your hearts, a bright light into your lives, and some magic into your minds. These are her love notes to us all; to love each other, love and appreciate her gifts, and most of all – love the music that is timeless.