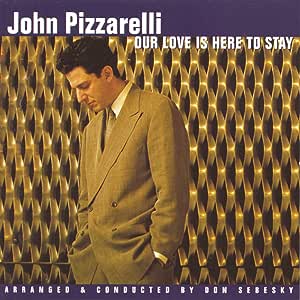 Our Love Is Here to Stay

Guitarist/vocalist John Pizzarelli, son and protégé of renowned guitarist Bucky Pizzarelli, opens up on this 1997 release with a sophisticated set. In addition to his usual trio of brother Martin Pizzarelli on bass and Ray Kennedy on piano, Pizzarelli employs the Don Sebesky New York All Star Band on this session. That orchestra evokes rich textures with its four-trumpet, five-trombone, five-woodwind and two-French horn lineup. "Our Love Is Here to Stay" received a nomination for Best Instrumental Arrangement with Accompanying Vocals at the 1998 Grammys. Other highlights include "Dream," "Rhythm Is Our Business" and "Say Hey Kid." --John Swenson

Cotton Mather
5つ星のうち5.0 stunning arrangement/orchestrations
2013年10月18日にアメリカ合衆国でレビュー済み
Amazonで購入
If you have been around for fifty years or so, and if you have loved jazz as deeply as any art form can be loved, then you have loved the work of Don Sebesky and like any lover, you have longed to have him around as much as possible. He has not made that very easy. Between 1966 and 1975, he was readily available because Creed Taylor made it so, through his production work with Verve, A&M, and CTI. After 1975, his tether to Taylor unwound and we were left to our own devices to find the finest arranger and orchestrator of his generation. He is, sadly, as elusive as ever.

We have found him yet again, in this case, working with Mr. Pizzarelli (classy company, even for Mr. Sebesky). Though this cd is chasing the two-decade mark, it is as vital and vigorous as ever, and it's complexities are as seductive as they are musically challenging and satisfying.

Mr.Sebesky has left just the right amount of space for Mr.Pizzarelli's solo work and the latter has arisen to the occasion. Frankly, the guitarist/singer is a notch better here that he has ever been in any recorded venue...ever! This is because Mr. Sebesky knows, like nobody knows, how to write rich harmonies and carefully calibrated counter melodies. And his ability to quote is directly proportional to what is reasonably quotable in the presence of Mr. Pizzarelli. The point is to quote when the quote fits the tune and the structure, not to quote just to prove that quotation is possible.

Go back to Mr. Sebesky's earlier work--he mastered the sweet-sparing accompaniment at Verve and A&M and he experimented--thoughtful hypothesis to invariable conclusion--at CTI--if you have any doubt of this, listen to his knockout arrangement of "Little Train" (2nd movement of Villa-Lobos' "Bachianas Brasileiras #2" for George Benson--in the epoch of Bensonian Moderation and Reservation--before he made it essential that he be thought of as a vocalist [an aspiration achieved and a claim reduced by his excesses as "just another African-American vocalist who sounds just like any other African-American vocalist"--a virtue in particular and a vice in general]).

Congratulations to Mr. Pizzarelli who is modest enough to share the stage with a genius in order that his own genius emerge...with a bang and not a whimper. Congratulatons to Mr. Sebesky who has, yet again, found a soloist who is as enriching to the plural as he is clarifying to the singular.
What a cd! What a pair!