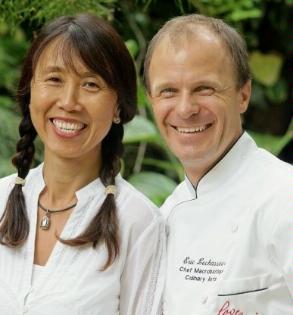 ERIC LECHASSEUR has been working as a professional chef since 1985. He holds a professional Cooking Diploma from Quebec, Canada, and has completed additional training programs in France and Japan. As a private chef, he has held numerous positions in the Entertainment Industry, cooking for many celebrities. More publicly, he has worked as a chef at several popular Los Angeles restaurants and gained international experience as the Executive Chef at Club Med Resorts all over the world.Eric began his macrobiotic journey in 1993 to help combat some of his wife Sanae's medical problems. From that point, their interest in macrobiotics grew. Now, Sanae has become a whole health macrobiotics teacher, and Eric is a sought-after chef specializing in macrobiotics and healthy, yet delicious cuisines. Eric has also succeeded in using his macrobiotic practices to cure his own often crippling allergies.Now, incorporating all of his experiences, he has perfected a vegan French-Asian gourmet cooking style never seen before. Working in this style, he has already developed an expansive range of macrobiotic recipes and continues to work on more each day. Eric recently developed the pastry recipes for the opening of the first gourmet macrobiotic café on the west coast, the M café de Chaya.Eric resides with his wife, Sanae, three golden retrievers, and two cats in Santa Monica, CA.

Macro Wellness
5つ星のうち2.0 Not as good as expected
2014年3月1日に英国でレビュー済み
Amazonで購入
Too expensive for the amount of content!
However, revenues and organization is good!
The presentation could be much, much, better
続きを読む
1人のお客様がこれが役に立ったと考えています
違反を報告
レビュー を日本語に翻訳する

airie
5つ星のうち2.0 Looks good, but somewhat disappointing
2013年1月3日にアメリカ合衆国でレビュー済み
Amazonで購入
I'm macrobiotic, so i always look for good macro and vegan cookbooks. These recipes look especially beautiful, and I was excited to try them for special occasions, but I have to wonder if someone has actually tried them out.

They are often very involved and require special ingredients and equipment (madeleine pans anyone?) and still don't turn out looking as you'd expect. This is especially disappointing after all the work, if it's for something special.
続きを読む
違反を報告
レビュー を日本語に翻訳する

Jazzbrat
5つ星のうち3.0 I do not think anyone tested some of these recipes.
2007年10月30日にアメリカ合衆国でレビュー済み
Amazonで購入
First, I would like to say that this book is visually beautiful. Every dessert in here looks absolutely mouthwatering.

Now the disappointing news- I do not think anyone tested some of these recipes. If you look at some of the baked goods, you will find an overabundance of liquid per dry ingredients.

I have tried 2 of the recipes, neither of which came out well. I first tried the Kabocha Pound Cake. The taste was great but the batter was thinner than pancake batter and took over twice as long to bake. (It is NOT my oven as I keep an oven thermometer in it.) Looking at the recipe even before I made the cake, I thought the dry to wet ratio was a bit odd. I don't think the recipes were tested OR edited.

Next I tried the azuki rolls. Again- wet to dry was suspect. I had to pour off some water from the cooked beans, although that is not a step in the process. Even with that, the dough was so loose, I could not roll it up. I have worked with delicate dough before, including philo, and have never had an issue before. The baked rolls were good but were so crumbly they fell apart. They were more like super delicate shortbread than an actual roll.

I am now very wary of trying other recipes in the book. I really want to try all of them. Someone here mentioned that they tried the biscotti and had no trouble. I will definitely make them as the recipe has some positive feedback.

If you have the book, and have made some of the recipes, please post your results. I would be very interested to know which ones work. In the meantime, if I attempt to make any of the other baked goods, I will update my post.
続きを読む
19人のお客様がこれが役に立ったと考えています
違反を報告
レビュー を日本語に翻訳する

Chico Marx
5つ星のうち5.0 Excellent
2009年11月15日にアメリカ合衆国でレビュー済み
Amazonで購入
I totally recommend that you get this book. Especially if you're a person who is perpetually dieting to lose weight, or you're a person who has medical conditions that require you to eat a better diet. Macrobiotic food is a great way to change it all around. But, should you miss eating the deserts, well Eric's deserts are an awesome way to indulge that side of you. The cakes and tarts are the way to go. ; )

If you are in Los Angeles or live here, you can go to M Cafe De Chaya to sample Eric Lechausser's work, but he is no longer with M Cafe [and there are times I go there and the deserts are not as good as they used to be.]. So, to further enjoy Eric Lechausser's work, you can go to a restaurant called "Seed". "Seed" is owned by Eric and his wife Sanae. They have a book together called "Love, Eric & Sanae". Which is more dedicated to Macro dishes. Also, "Seed" has Macro cooking classes.