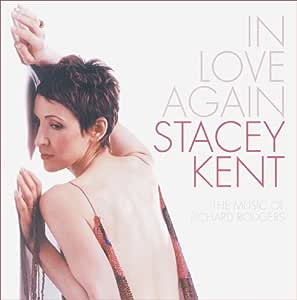 Stacey Kent was a very good singer when she made her debut but on her fifth album she's even better. In Love Again features high-class material delivered with emotional depth and clear individuality, a touch of expressive huskiness occasionally apparent. Her exceptional vocal control is excellent and so is her handling of the lyrics. Many of the finest melodies from the pen of Richard Rodgers were graced by the audacious and witty lyrics of Lorenz Hart and, in a song like "Manhattan", Miss Kent handles the internal rhymes and sophisticated mood with aplomb. In contrast she enters with feeling into the simpler, more evocative ambience of "It Never Entered My Mind" aided by a haunting tenor solo by Jim Tomlinson. He's only on a few of the dozen tracks and the accompaniment is mainly handled by a rhythm section in which David Newton's sensitive piano is outstanding, whether soloing or accompanying, while guitarist Colin Oxley also takes solos which are warm, mellow and wholly appropriate. There's no doubt however who is the true star of this well-conceived programme. Good jazz singers are few and far between and one as outstanding as Stacey Kent is not to be missed. --Graham Colomb�

Stacey Kent is back, with her regular combo, for an engaging tribute to Richard Rodgers. In addition to routinely covered songs like "It Never Entered My Mind" and "Bewitched," the Britain-based vocalist looks to the South Pacific book and comes up with two items seldom performed in a jazz context - "I'm Gonna Wash That Man Right Outa My Hair" and "Bali Ha'i." Happily, these are two of the best cuts; the former, with its burlesque-ish 6/8 middle section, works amazingly well. The sound of the disc is strong, highlighting the nicely varied arrangements and the innate charm of Kent's puckish voice.

J. McDonald
5つ星のうち5.0 In Love Again.
2020年10月13日に英国でレビュー済み
Amazonで購入
Yet another excellent album from Stacey Kent, this one dating from 2003 and dedicated to the music of Richard Rogers; she is accompanied by her husband Jim Tomlinson on tenor sax/flute, Colin Oxley on guitar, David Newton on piano, Simon Thorpe on bass and Jasper Kviberg on drums.
No-one quite sings songs like these as Kent does; her intimate and unaffected manner with just enough of a personal sense of style and good taste imparts a real magic to them; most of the tracks are with just the rhythm section and it`s a well-judged set of what are mostly ballads.
All the lyrics are included in the booklet; the CD has a playing time of 53.57 minutes.
Amazon have now stopped providing sound samples – a stupid and extremely inconvenient move for all prospective purchasers – I suggest searching YouTube or another music website for tracks from the album.
続きを読む
違反を報告
レビュー を日本語に翻訳する

Anton Coy
5つ星のうち4.0 More American Songbook Gems from Stacey Kent
2002年2月15日に英国でレビュー済み
Amazonで購入
I am a great fan of Stacey Kent and listened to her latest offering with great anticipation. The format is familiar to that of her other albums : Great American Songbook standards in a sophisticated small combo setting. The major soloists are there and would be well known to anyone who has a Stacey Keny C.D. already : Stacey's hubby Jim Tomlinson (sax and flute), the talented David Newton (piano)and Colin Oxley (guitar). All the tracks have a light but expert touch and Stacey's phrasing and interpretation are, as usual, top class.
There is however an overall sameness in tempo and format about many of the tracks that was evident in "Dreamsville" as well. This had the effect of not holding my attention for the full span of the record. I had quite the opposite reaction to "Let Yourself Go", for example, which has a much broader mix of interpretations. A couple of more up tempo numbers to give Tomlinson and Newton, in particular, a chance to let rip, would have mixed up the whole package in a more interesting way.
I don't regret at all having obtained "In Love Again" virtually on the day it became available, and it would be a good introduction to anyone not familiar with Stacey Kent's work, but it falls a little short of being my favorite representation of her work.
続きを読む
10人のお客様がこれが役に立ったと考えています
違反を報告
レビュー を日本語に翻訳する

allenr
5つ星のうち4.0 super songbook stuff
2014年1月28日に英国でレビュー済み
Amazonで購入
Stacey Kent is in fine voice here and her choice of material is sublime.
The arrangements are balanced and clever.
If you are already a fan then you need this in your collection
続きを読む
違反を報告
レビュー を日本語に翻訳する