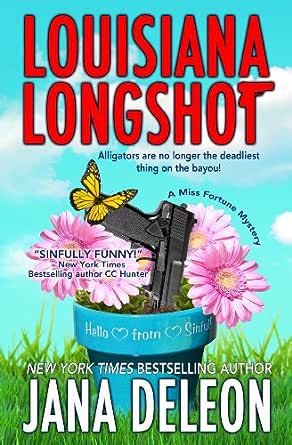 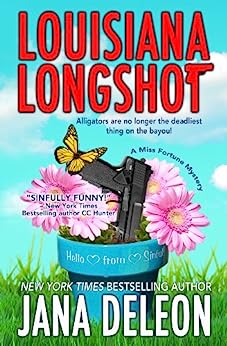 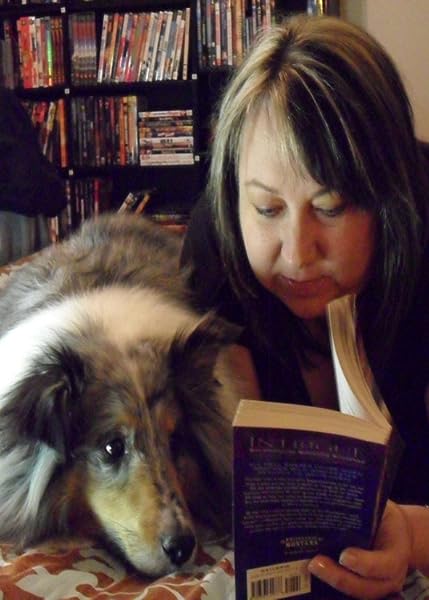 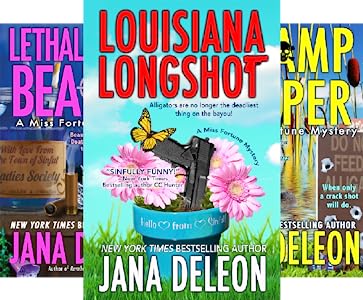 CIA assassin Fortune Redding is about to undertake her most difficult mission ever—in Sinful, Louisiana. With a leak at the CIA and a price placed on her head by one of the world's largest arms dealers, Fortune has to go off-grid, but she never expected to be this far out of her element. Posing as a former beauty queen turned librarian in a small bayou town seems worse than death to Fortune, but she's determined to fly below the radar until her boss finds the leak and puts the arms dealer out of play. Unfortunately, she hasn't even unpacked a suitcase before her newly inherited dog digs up a human bone in her backyard.

Thrust into the middle of a bayou murder mystery, Fortune teams up with a couple of seemingly sweet old ladies whose looks completely belie their hold on the little town. To top things off, the handsome local deputy is asking her too many questions. If she's not careful, this investigation might blow her cover and get her killed. Armed with her considerable skills and a group of elderly ladies the locals dub The Geritol Mafia, Fortune has no choice but to solve the murder before it's too late.

What authors are saying:

What readers are saying:

“This was a hoot!!! If you like mysteries and Southern eccentrics, this is the book for you. More twists and turns than the Louisiana bayou.”

“It has a flavor of Miss Congeniality, but it is much more than that.”

“I read this book in one night, unable to put it down because I couldn’t wait to see what happened next.”

“I’ve rarely thanked writers for the entertainment they provide. Nevertheless, I feel strangely compelled not only to thank this author, but to recommend this book to everybody and anybody – I give it five laugh out loud stars!”

Jana DeLeon grew up among the bayous and small towns of southwest Louisiana. She's never actually found a dead body or seen a ghost, but she's still hoping. Jana started writing in 2001 after attending a funeral, but that's a whole other story. She focuses on murderous plots set deep in the Louisiana bayous and the secrets that lie just beneath the surface of small towns. By day, she writes very boring technical manuals for a software company in Dallas.

Reader2
5つ星のうち2.0 This "could" have been a 5 star review but not without an ending.
2016年2月14日 - (Amazon.com)
形式: Kindle版Amazonで購入
I very much enjoyed the banter and craziness of this book right up until the end, or I should say until it failed to end. I detest books that give you only "part" of the story and then make you buy another book to find out how the first one ended. I suspect the mystery won't be solved in the next book either, hence the word "series." (I truly wish authors knew the difference between the words "series" and "serial.")

The story starts out with CIA agent Fortune being sent to Louisiana under cover to hide until her boss can discover who the mole is in the CIA. The mole blew Fortune's cover and now there's a hit out on her. She's not supposed to draw attention to herself in Louisiana. Of course she immediately gets involved in a murder investigation with a couple of gray haired old ladies who aren't what they appear to be. The mystery of the murder is solved by the end of the book, but you have no clue who the mole is or if the hit is still out on Fortune. The book just ends.

Laughing Raccoon
5つ星のうち4.0 Woulda given it 5 but...........
2014年1月8日 - (Amazon.com)
形式: Kindle版Amazonで購入
I really wanted to give this book 5 stars, but there were just too many errors to do so. She flubbed names a couple of times and there were some missing and wrong words that caused me to re-read a couple of things. That said, I loved this book! I get so sick of hot female sleuth falls for hot cop and then proceeds to do stupid things just because he is hot. Not in this one. Yes, she does some stupid things that hot cop sees, but not because of him. He just happens to be around when the "Geritol Mafia" has gotten her in another pickle. What a wild romp this turned out to be. And yes, I did laugh out loud at some parts of this book. It was just what I needed. If you are looking for something meaningful and deep, skip this book. If you are looking for something light and funny without the characters having sex every other page, then this is for you. Although there is no sex, there is some cursing, but way less than I see in most books. Well done Jana DeLeon. This was a delight to read.
続きを読む
240人のお客様がこれが役に立ったと考えています
レビュー を日本語に翻訳する

Leigh
5つ星のうち5.0 Fast-Paced Mystery with a Lot of Laughs
2012年6月29日 - (Amazon.com)
形式: Kindle版Amazonで購入
If you like a big dose of humor in your mystery books, you will enjoy "Louisiana Longshot." The main character, Fortune Redding, is hiding out in Sinful, Louisiana. Fortune assumes the small bayou town will be boring and drama-free, but she quickly finds out that the town and its residents are not what they seem. I really enjoyed the characters, especially Ida Belle and Gertie, two of Sinful's meddlesome older residents. For those who like to solve the mystery before the end of the book, you might be surprised at what happens. I was feeling pretty smug until I realized I was totally wrong about the book's conclusion. This is a fun read that is perfect for fans of humorous mysteries or those who enjoy novels set in the South. I can't wait to read the second book in the series.
続きを読む
247人のお客様がこれが役に立ったと考えています
レビュー を日本語に翻訳する

Patriot1776
5つ星のうち1.0 Tries too hard to be like Stephanie Plum
2019年5月10日 - (Amazon.com)
形式: Kindle版Amazonで購入
I really wanted to like this book. I have been a fan of the Stephanie Plum books for several years, and since the Miss Fortune series had rave reviews and people drawing comparisons to the Plum books, I figured I would give this a shot. My biggest problem with this book is simply that the author is trying too hard to piggyback off of the Plum series. The story is written in first person POV and it tries too hard to be funny. Maybe since I am familiar with Janet Evanovich's writing style and the presentation of the Stephanie Plum stories, I am disinclined to want to read more of the same from someone else. I'm not saying that Ms. DeLeon has copied Ms. Evanovich, but. . .there are too many similarities for me. The writing is not as strong in this book, so that's a definite fail.

I think if the writing style was more original, this story might have been more appealing. As it is, the writing, overall, is weak and the premise seems contrived (especially if you're already a fan of the Stephanie Plum books). The writing and the story line didn't appeal to me, so I won't be continuing with this series.

Amazon Customer
5つ星のうち5.0 Be Prepared...
2019年8月12日 - (Amazon.com)
形式: Kindle版Amazonで購入
...because once you start this series you are going to be buying every book in it. (It only took me 4 days to purchase all 15 books. Thankfully Amazon has a package deal for the first 14).

Jana DeLeon can write throughly engaging characters and a descriptive scene like very few authors I have read and I have read a lot. Fortune Redding is a wonderful character that has you cheering and grateful people like her actually exist. The growing and totally realistic emotions she goes through throughout the series will make some readers forget she is just a fictional character. Ida Belle and Gertie have to be read to be believed. They defy description.

Louisiana Longshot is an enjoyable book that will have you quickly going for Book 2 to see what happens. Once you start down this path, if you are familiar with the South at all (and I mean that in a completely wonderful way), you will be in tears, and have people looking at you strangely if you are reading in public, because you will be laughing so hard.

This is where the descriptive writing comes in and you will see the scenes so clearly. The escapades the ladies get into, to the chagrin and sometimes humor of Deputy LeBlanc, are so much fun! So, sit back and prop your feet up, and don’t start a book if you are going to sleep anytime in the following few hours!