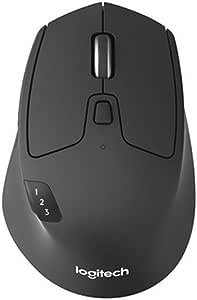 Josiah J
5つ星のうち5.0 Great mouse
2020年4月29日にオーストラリアでレビュー済み
Amazonで購入
This mouse is very fast and responsive. It has a load of features that are not just fun but also useful. Bluetooth connector means I don't need a unifying receiver to connect to my macbook (but you can use one - it is stored inside the mouse itself).
続きを読む
違反を報告
レビュー を日本語に翻訳する

Matt M.
5つ星のうち5.0 My Favorite Wireless Mouse
2020年2月25日にアメリカ合衆国でレビュー済み
Amazonで購入
I've been using a Microsoft Sculpt Comfort Mouse for the past 5-ish years, and the left button became very inconsistent so I decided it was time to upgrade. The logitech Triathlon M720 came up in nearly every listing of best mice for the last few years, so I decided to give it a shot. For anyone wondering, this is definitely the Triathlon M720 - I have no idea why this is marketed by logitech with a different name. It has M720 printed on the bottom and even identifies on my Windows PC as the Triathlon M720.

So far I'm loving this mouse! It has a very comfortable feel for my hand and a multitude of buttons and features to dive into. Here are the details of what I have found after using this mouse for a week:

Tracking
This is the most important feature to me as I work on different tables and surfaces and I don't want to have to use a mouse pad. The laser tracker here is excellent and I have had no issues on wooden tables or white desktops. I haven't tried glass yet, but I don't generally work on glass surfaces so that is not such a big deal to me.

The buttons all function very well and I have only one small complaint which is that the left and right mouse buttons are easy to accidentally click, at least for my big clumsy fingers. This is likely due to the way I hold and move the mouse and I'm sure I'll get better at it over time. I haven't explored the gesture button that much yet, but if you are into using gestures for shortcut actions then this might be right up your alley. The scroll wheel toggle and the device toggle are the only buttons that are not programmable. The scroll wheel toggle switches between a "clicky" scroll style and a smooth "free-spin" style of scrolling. I personally don't care for the free-spin mode as it is too sensitive and hard to control. That said, there might be certain applications where it would be useful. The device toggle button is used to switch between connected devices, which brings me to the next topic.

Connectivity
This is one of the best features of this mouse! I typically work on two different computers, and I have always kept two different wireless mice on my desk. With this mouse I can connect to both via Bluetooth and just switch between each device. A 2.4Ghz dongle is also included in case you can't use Bluetooth which brings the total possible connected devices up to three.

Price
I got this mouse for $24.99 and I think that's a steal. There are other listings by logitech for the M720 and it generally runs about $34 so you should definitely purchase from this listing instead.
続きを読む
11人のお客様がこれが役に立ったと考えています
違反を報告
レビュー を日本語に翻訳する

Colegate V. Spinks
5つ星のうち5.0 Tops if you are Right Handed
2020年3月1日にアメリカ合衆国でレビュー済み
Amazonで購入
I have always liked the Logitech mice, keyboards and web cameras. I wanted to try out the multi system capability of this mouse. I have a small Logitech Bluetooth keyboard (K380) that supports multiple systems. This mouse is sold as the "Logitech Pro Mouse", but is really the same as the "Logitech M720 Triathalon" a Multi-Device Wireless Mouse – Easily Move Text, Images and Files Between 3 Windows and Apple Mac Computers Paired with Bluetooth or USB, Hyper-Fast Scrolling, Black. Perhaps I was not reading the description correctly, but my assumption was that the USB dongle that came with the mouse was Bluetooth. It comes with the USB 2.4 GHz unified receiver.I found this out after a short call to Logitech tech support that was very helpful and did not require me to be on hold for what usually seems like hours. 5 Stars for Logitech Support.

The mouse worked fine with the unified receiver out of the box. I was wanting to use it Bluetooth however so I ordered an inexpensive Bluetooth receiver for my older desktop from Amazon and it was delivered the next day. It was the ZEXMTE Bluetooth USB Adapter CSR 4.0 USB Dongle Bluetooth Receiver Transfer Wireless Adapter for Laptop PC Support Windows 10/8/7/Vista/XP,Mouse and Keyboard,Headset. (It worked great out of the box as well.

I as then able to get the Logitech mouse (M720) and keyboard (K380) hooked up and working. I've not experimented with the Unified Features yet, but have attached the devices to my iPhone and a laptop system.

Cons: I'm left handed and it can be difficult at times to manage the M720 mouse. I do have a Logitech M510 that is more ambidextrous in shape and handling I keep with my laptop. I wish that there was an M720 in a shell similar to that of the M510. Perhaps there is a DIY project in the future.

Trivia: Although only about 10% of the population is left handed, in the top 5% of those that are considered to be experts in their field 50% are left handed.
続きを読む
10人のお客様がこれが役に立ったと考えています
違反を報告
レビュー を日本語に翻訳する

John B.
5つ星のうち5.0 The mouse I didn’t know I needed
2020年3月21日にアメリカ合衆国でレビュー済み
Amazonで購入
This mouse is basically the same as the M720. Prior to this Logitech mouse I was using the Microsoft Surface mouse. When I bought the Microsoft mouse I was going for something super slim in profile and under $30. A few months later I bought this because I saw it on sale for under $30. I love the ergonomics on the mouse- something I didn’t realize I was missing out on with the Microsoft mouse. More impressive though was how easy this mouse makes it for me to shift between my work laptop, personal laptop, and desktop at home. Oh, and they're all different OSes too; Windows, Mac, and ChromeOS. The M720 has a great feature called Flow which lets you switch seamlessly between computers, regardless of OS. You just need to move the mouse to the edge of the screen like you would for a second monitor and the mouse pops over to your other computer, if they’re both on and set up. Great feature that I never knew I needed. Other than that, it’s a solid mouse.
続きを読む
6人のお客様がこれが役に立ったと考えています
違反を報告
レビュー を日本語に翻訳する

Sneaky
5つ星のうち5.0 Solid mouse, literally and figuratively
2020年4月25日にアメリカ合衆国でレビュー済み
Amazonで購入
I used the Logitech M705 Marathon for a long time (two, actually) and was pretty happy with that model. Both were retired for the same reason - the scroll wheel became less responsive after many solid years of service. I tried some of the cheaper mice from Anker and VictSing with adjustable DPI (which the M705 didn't have). They performed well enough for the price but felt cheap and glued-on pieces started falling off after a couple years of daily use.

Thanks to COVID-19 lockdowns, I started working from home and needed a mouse for my makeshift basement office. I bought this mouse based on reviews, reasonable price, ability to connect via either the bundled USB receiver or Bluetooth, and my overall positive impression with Logitech products.

I had some concerned that the lack of adjustable DPI would be a problem, but it's not. It's sturdy and has a nice weight to it. Tracking is flawless and the scroll wheel is appropriately sensitive. The scroll lock/unlock feature is great. When it's locked, the scroll wheel clicks like most scroll wheels do, advancing the page up/down at reading speed. When it's unlocked, you can flick the scroll wheel and it spins like a top, fast-scrolling through long pages. I'm using it with the bundled Unifying receiver, although I also paired it via Bluetooth on the second channel (the three-channel setup is a nice touch). I found the Unifying receiver to result in slightly smoother tracking performance than Bluetooth, but both worked fine.

I liked this mouse so much that I bought a second one within a week for my home computer. Just unboxed it tonight and it's every bit as perfect as the first one. Rarely have I been so impressed with the design, build quality, and performance of a mouse. For the price, it's a steal. Hope it holds up!
続きを読む
1人のお客様がこれが役に立ったと考えています
違反を報告
レビュー を日本語に翻訳する
すべてのレビューを参照します
トップへ戻る
Amazonについて
Amazonでビジネス
Amazonでのお支払い
ヘルプ＆ガイド
日本語ショッピングのための言語を選択します。 日本ショッピングのための国/地域を選択します。
© 1996-2020, Amazon.com, Inc. or its affiliates