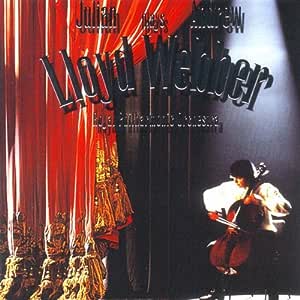 Apparently Julian and Andrew Lloyd Webber's first collaboration occurred when the latter was nine and the former six; it took place on the stage of a toy theatre, and Julian's role was then limited to operating the collection of tiny plastic soldiers which made up the cast of Andrew's latest musical. More than 40 years have passed since then but, as Lloyd Webber Plays Lloyd Webber proves, the brothers still enjoy a remarkable familial and musical relationship. Julian first recorded a series of arrangements of hits from Andrew's musicals in 1990, and this disc updates the enterprise with six new tracks from Whistle Down the Wind, The Beautiful Game and Sunset Boulevard. The orchestral arrangements are deliciously soupy (especially "All I Ask of You" from Phantom of the Opera, "Love Changes Everything" from Aspects of Love and "God's Own Country" from The Beautiful Game) and suit Julian's appropriately swoony and uninhibited approach to the music. Fans of the Lloyd Webbers shouldn't be disappointed. --Warwick Thompson

Mikicellist1975
5つ星のうち5.0 When musical theatre meets classical music
2014年4月5日に英国でレビュー済み
Amazonで購入
This is an excellent collection of some of Andrew Lloyd Webber's musicals hits arranged for cello and orchestra, performed by his brother Julian lloyd Webber and the RPO conducted by Barry Wordsworth.
There is something for everyone, from classical music enthusiasts to musicals fans.
Perhaps, for me, the most touching piece in this collection is the Grammy Award winning Pie Jesu, from Andrew Lloyd Webber's "Requiem", written in memory of their father, composer William Lloyd Webber, who died in 1982.
I sometimes see comments on the Internet by people saying Julian is famous only because he is the brother of Andrew Lloyd Webber. That is unfair and can't be true. The age gap between the brothers is only about 3 years, I think. Their careers started pretty much simultaneously but they soon took very different directions. Surely they must owe some of their talent to the musical genius of their father, composer William Lloyd Webber, and to the musical environment they grew up in. But when we come to listen to Julian's recordings or live performances, whose brother or son he is is irrelevant, he is an extraordinary cellist who plays with impeccable accuracy and incredible passion, which he communicates very well with the audience.

M E Perkins (Mrs)
5つ星のうち5.0 A GREAT CHILL OUT CD
2018年11月14日に英国でレビュー済み
Amazonで購入
We both thoroughly enjoyed listening to this CD - it is a great amalgamation of the two brothers. Should a further one become available in the future we would certainly purchase it.
続きを読む
違反を報告
レビュー を日本語に翻訳する

Cantab
5つ星のうち4.0 CD
2011年12月19日に英国でレビュー済み
Amazonで購入
I used to have this music as a tape - long ago - and was really pleased to come across it as a CD so that I could listen to it again. Great to have such favourite tunes all in one collection and played so well.
続きを読む
1人のお客様がこれが役に立ったと考えています
違反を報告
レビュー を日本語に翻訳する