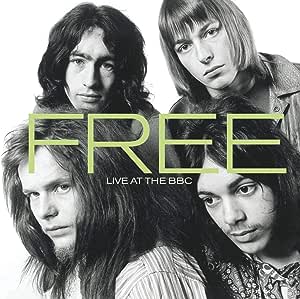 Live at the BBC (Hk)

Import only double-disc album featuring a compilation which captures the rise of one of the UK's most talented blues / rock bands, from their very first session in 1968 [astonishingly, recorded just days after bass play Andy Fraser's 16th birthday] through to their last official recording for the beeb, 'In Concert' for John Peel in July 1970 and includes the rare December 1969 session for Top Gear which never even made it to bootleg. Universal.

From their Very First Session in 1968 (Astonishingly, Recorded Just Days after Bass Play Andy Fraser's 16th Birthday) Through to their Last Official Recording for the Beeb, 'in Concert' for John Peel in July 1970, this Compilation Captures the Rise of One of the UK'S Most Talented Blues / Rock Bands. While Some of the Material Has Surfaced as Bonus Material on Reissues, the Bulk of it Has Never Before Been Available; 'sugar for Mr Morrision', 'woman', 'i'll Be Creepin'' 'trouble on Double Time' and 'mouthful of Grass' in Session Tracks and Both the in Concert Performances Are Officially Released Here for the First Time. The December 1969 Session for Top Gear Never Even Made it to Bootleg, It's a Gem of a Find that Turned Up Relatively Recently in Paul Kossoff's Private Archive.

The Punk Panther
5つ星のうち4.0 An album of two parts...
2018年6月20日に英国でレビュー済み
Amazonで購入
Basically, this is a double album of two contrasting parts - Disc One which has tracks from Free recording "live" in the BBC studios for broadcast. It is "live" in that the band picked up their instruments and are playing straight, without multiple takes or overdubs and so on. It is not "live" in the way that many people expect in that it is not in a gig setting with a stage and audience. Some seem to have misunderstood that particular concept. Just because there is no audience doesn't mean the band aren't playing live.

However, it is "live" as far as I am concerned and, as is usually the case on these BBC studio recordings, the sound quality is excellent. Disc One is definitely worth having and showcases this marvellous, unpretentious blues rock band at their very best "kick posterior" best.

Disc Two is where we are somewhat let down. I guess if I could have given the album 3.5 stars I would. The "John Peel Sunday Concert" material suffers from truly appalling sub-bootleg sound. Tracks 1-4 and 10-11 are pretty much unlistenable, and I am certainly no "audiophile" (Heaven forgive!). As another reviewer has correctly stated, tracks 5-9 are acceptable, but in many ways Disc Two is a write-off. In fact I haven't even downloaded the offending tracks to my digital library.

Having said that, I am not going to have kittens over it and bleat on about "wasted money" and "I demand a refund" and so on, because the price was such that I feel it justifies the cost of owning the Disc One material. I am more than happy to pay for those recordings, so there you go. If you want to experience the bluesy magnificence that was Free in front of an audience, then "Free Live" is the one for you. You can't go wrong with that.

Mik
5つ星のうち2.0 Sound quality issues
2014年5月13日に英国でレビュー済み
Amazonで購入
Nobody expects live recordings to be perfect, but this is a BBC publication and should be better; the sound quality on some of the tracks is absolutely awful, as if from a cheap portable cassette recorder placed next to a radio. But what is remarkable is that the musicianship shines through the muffled fog. I would strongly advise any prospective buyer to listen to the online tracks before buying.
続きを読む
7人のお客様がこれが役に立ったと考えています
違反を報告
レビュー を日本語に翻訳する