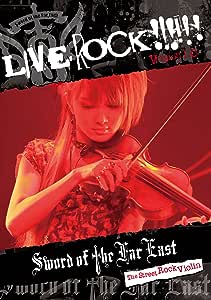 Keith Phillips
5つ星のうち5.0 An Excellent Live Performance of Violin Rock
2014年7月4日に日本でレビュー済み
Amazonで購入
Sword of the Far East is a 5 piece instrumental band from Tokyo, fronted by violinist Ayasa, who trained at the Toho Gakuen School of Music. They are best known outside Japan for their 28 minute Youtube “Canon Rock” video which has received more than 250,000 views. Starting with a rock arrangement of Johann Pachabel’s Canon in D (which they actually play in the key of C), it takes off into a rollercoaster ride through a quarter of a century of western popular music, from Jailhouse Rock to Lady Gaga via Led Zeppelin.

Rather than the Zeta electric violins favoured by many crossover violinists (such as Korea's Jenny Bae), Ayasa plays a 5 string electro-acoustic which has a more natural sound and provides the full range of both a viola and a violin. The lower register is used to great effect on some of the more rock orientated pieces.

This live recording captures the band in full flight starting with a rock arrangement of the JS Bach theme commonly known as “Air on the G String” and finishing with the aforementioned Pachabel’s Canon (this time played in G). In between are 11 varied but mostly high energy pieces, largely drawn from their first self-titled album. Two particularly beautiful slower tracks provide contrast. Ryukyu Song, the first line of which ascends the Okinawa pentatonic scale, starts with Ayasa playing pizzicato over an appegiated guitar before repeating the melody with the bow. Track 11 (Japanese title) is a haunting melody played over piano and soft synth strings. Track 8 has a jazzy feel with short drum breaks and a piano solo, track 6 really gets the audience jumping with its hoedown motif. The folksy live favourite Gipsy Girl is another standout. The live sound is good throughout.

These young Japanese musicians are top exponents of the new wave of violin rock and this DVD is a perfect introduction. Much of the camerawork is focused on Ayasa and provides a closeup view of a spirited performance by an accomplished and confident musician with an impressive mastery of her instrument. Highly recommended. I would give it 4.5 stars.