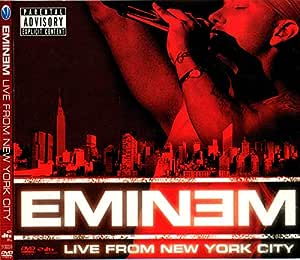 I loved this whole production. It's long, fun, energetic and iconic. The production is split into 3 major parts - Newer stuff from around the "Curtain Call" and "Encore" period like "Ass like that (changed and updated slightly for concertgoing effect), Evil Deeds and Mosh. Then Em brings out his D-12 team for part two. It's good, energetic rap but in my opinion it doesn't hold a candle to Eminem's solo hits. Luckily, Part three rolls out with Em's classic gold like Cleaning Out My Closet, Mockingbird and one of my favorite "fun" songs "Just Lose It". The parts are tied together with transition material in the form of an ongoing series of intermissions that act as a "behind the scenes" mockumentary style skit with Em as a tortured soul. It was disturbing but very powerful to see it come to its climax.

One thing: Everyone should already know that, since this is a LIVE production concert, there are the usual LIVE production caveats like lyrics cut short for the audience to provide them in an immersive experience. Some tracks are cut pretty short to be strung together thematically with others or with skits acted out by Em and D-12. I didn't find these to be a detractment in any way, but some people don't enjoy "LIVE" CDs as much as studio recorded professionally cut ones. You know who you are that those same "frustrations" of yours will be tweaked by this DVD.

All in all though, one Eminem fan to all you others, THIS is the one to get for your concert/music/Eminem being Eminem needs.

Raptor
5つ星のうち5.0 Love this!
2014年5月4日 - (Amazon.com)
Amazonで購入
I am a die hard Eminem fan. Hubby purchased this for me at xmas. He made a n excellent choice. I love seeing E in action performing in a concert. This is also the last tour that Proof is in. Its soo sad seeing him and E singing together. Knowing he's now gone :-( And how heart broken E is over his death. This is priceless and a must have for any Eminem fan!
続きを読む
1人のお客様がこれが役に立ったと考えています
レビュー を日本語に翻訳する

Sam
5つ星のうち1.0 You're joking, right?
2014年9月17日 - (Amazon.com)
Amazonで購入
This is by far the worst concert blu-ray I have ever had the displeasure of watching. Don't get me wrong, I've been an Eminem fan since hearing a bootleg copy of the My Name Is cassingle (stop making up words), but this was utterly, mind-bendingly, obtusely, egregiously horrendous in every respect. I will explain:

Surround Mix: WASTE OF MY 5 FREAKING EXTRA SPEAKERS no crowd noise even though Eminem lets the crowd rap half the songs? ARE YOU KIDDING ME???? If I had an 8 year old I wouldn't be telling you he could have done a better job, I'd be telling you that if he turned this in as a homework assignment to Terrible Class (the class where they teach you how to be terrible at everything), he'd get an A++# (a pound is better than a plus by 100%) and I'd disown him. Seriously, whoever-the-hell-made-this? Seriously?

Sound Quality of Performers: Excellent! Oh wait, since everyone does a miserable, intolerable and generally amateurish job that's a downside. Also how is there no crowd noise at a LIVE CONCERT??? I THOUGHT THAT WAS THE POINT OF SURROUND SOUND! THIS GARBAGE IS ACTUALLY LESS IMMERSIVE THAN LISTENING TO THESE SAME SONGS ON THE ORIGINAL ALBUMS IN STEREO!!!!! I forget what I was talking about.

Also some people say Eminem isn't really singing in this. To that, I respond that I hope to God that he was rapping live because if that was the best vocal track they could put together, well holy moly.

Picture Quality: Very good, but Eminem is very old and looks like he probably smokes cigarettes, which made me sad and want to quit smoking. Extra points for possible alternate use of Blu-Ray as a smoking cessation aid. Total score: Still 1 star.

Oh, and I thought I'd take this opportunity to mention that I have really sweet speakers and amps and stuff. Not that it has anything to so with my review, but I have Paradigm Monitor 7s, the Center 1, and like the matching surrounds and ADP rears. Integra processor, Big ass amps ho hum. Just wanted to brag really.

Oh and the Muse in Rome Blu-Ray kicked ass. I don't even like Muse, but that was nuts. Get that one.
続きを読む
2人のお客様がこれが役に立ったと考えています
レビュー を日本語に翻訳する

Terrell
5つ星のうち5.0 Five Stars
2016年11月2日 - (Amazon.com)
Amazonで購入
Awesome and great to see and hear from one of the best in this time!
続きを読む
レビュー を日本語に翻訳する

Tim Case
5つ星のうち5.0 Its Eminem!
2014年2月13日 - (Amazon.com)
Amazonで購入
Its not a documentary, its a concert, live Eminem music, Its awesome! I am a big fan so I even have documentaries just for the sake of having them but this is great!
続きを読む
レビュー を日本語に翻訳する
Amazon.comのカスタマーレビューを見る(30) 5つ星のうち4.0
Amazonプライム会員ならお急ぎ便、日時指定便が使い放題
さらに、映画もTV番組も見放題。200万曲が聴き放題 。クラウドに好きなだけ写真も保存可能。
> プライムを無料で試す