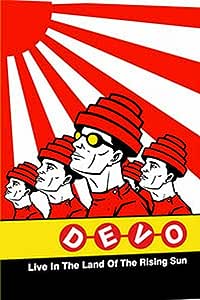 "From a stage super-heated by over-the-top, rock 'n roll cliche lighting, DEVO faced a sea of Asian Gen X'ers in a 100 degree plus fahrenheit venue in the bowels of Tokyo, Japan. The crowd was swathed in bootlegged energy domes and DEVO T's, mouthing the

PhilthyPhil
5つ星のうち4.0 Its ok but....................................
2010年8月4日に英国でレビュー済み
Amazonで購入
Nowhere near as good as the live disk in 'the truth about de-volution' - now thats a classic!! me & my mrs have watched that 1 a million times & always love it!
This dvd is lacking so much - firstly the drummer isn't Josh & he's been replaced by a corpse! no energy whatsoever!
I love Devo - always have! I want em to come back to the UK coz they're great live but this doesn't do em justice at all!
続きを読む
役に立った
フィードバックを送信中...
フィードバックをお寄せいただきありがとうございます。
申し訳ありませんが、お客様の投票の記録に失敗しました。もう一度試してください。
違反を報告
レビュー を日本語に翻訳する

Oliasdoug
5つ星のうち5.0 Worth every penny despite song selection...
2006年7月16日にアメリカ合衆国でレビュー済み
Amazonで購入
...and I ONLY say this because I'm in total agreement with a few other reviewers who remark how the song selection is way too similar to the Lollapalooza '96 DVD. Someone in another Devo review referred to NEW TRADITIONALISTS as a "sellout" album; well, he's entitled to his opinion, but that remains my favorite Devo album (so sue me)...man, I would have loved to hear live renditions of "Through Being Cool" and "Beautiful World." I can't help wondering how the Mothersbaugh/Casale clan feel about that record today...do they dislike it as well?

No matter, really. This is a fantastic concert recording and, as you've already heard, a must for Devo fans around the world. Just watched it last night for the first time (thank you, Netflix) and found myself feeling the old energy I used to get from their heyday. Hated to see the DVD end. Loved seeing the Tokyo kids getting such a rush from seeing their spudboy heroes live in concert. And again, as one other reviewer mentioned, the interview segments between songs are great; Gerald and Mark still have their senses of humor intact, as well as their keen observations of how the world is even more F'd up now than it was 28 years ago (3 cheers for Gerald's referring to the retarded cowboy in the White House!). Oh, one other thing: I've been wanting to get a Pug puppy for a long time. Seeing Gerald and Mark with their Pug companions at their side has only reinforced my determination. <grin>

They may be a little grayer, a little more long in tooth, but they've still got it...and God love 'em, it's obvious that they were having a blast doing this show. I've been a fan since first seeing them on Saturday Night Live back in 1978 and have never had the good fortune to see them live. In one of the interview segments, Gerry and Mark both stated that the 2004 Tokyo concert was a "rarity" and implied that it might not happen again. I hope that's not the case...I'll drag out my somewhat faded and now-tighter-fitting black Devo T-shirt with white lettering and go see them anytime. "Hey SPUDS!...Do you want MORE???" You'd better believe we do, Gerry.
続きを読む
4人のお客様がこれが役に立ったと考えています
役に立った
フィードバックを送信中...
フィードバックをお寄せいただきありがとうございます。
申し訳ありませんが、お客様の投票の記録に失敗しました。もう一度試してください。
違反を報告
レビュー を日本語に翻訳する
その他の国際レビューを読み込む

Craig S. Thom
5つ星のうち5.0 Still rocking hard after 30 years!
2004年10月24日にアメリカ合衆国でレビュー済み
Amazonで購入
I bought this to be a completist, thinking it couldn't possibly be as good as Rhino's Devo Live DVD from the 1996 Lollapalooza tour. I was wrong. The spuds are still giving it everything they've got. The crowd was seemed very into it, although few of them were alive when Devo first toured with these songs.

They open with the General Boy (Daddy Mothersbaugh) Nutra intro and a song from that album, and there are three songs from Freedom of Choice, but the rest are from the first two. That's a Good Thing. The peformers might be a little thicker, but they aren't taking their performance any less seriously.

The 6.1 sound quality is great, although Bob Casale is a little low in the mix.

After almost three decades, things are getting good for Devo fans. If they release The Men Who Make the Music on DVD we'll be all set.
続きを読む
21人のお客様がこれが役に立ったと考えています
役に立った
フィードバックを送信中...
フィードバックをお寄せいただきありがとうございます。
申し訳ありませんが、お客様の投票の記録に失敗しました。もう一度試してください。
違反を報告
レビュー を日本語に翻訳する