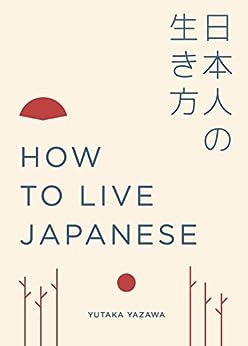 How to Live Japanese (How to Live...) (English Edition) Kindle版

Having spent university and early career years in London, Yutaka Yazawa decided to return to his childhood home of Tokyo. After a long career travelling in law, he decided to make the switch to writer. This will be his first book.

It follows a long yet rare tradition of Japanese scholars exposit Japanese culture in the English language, such as Nitobe’s “Bushido”, Okakura’s “The Book of Tea”, or Uchimura’s “Representative Men of Japan”.

150 years after the opening-up of the country, Japan today still remains largely a mystery, with its characteristic amalgam of millennia-old traditions, Ig Nobel-worthy technologies, and oft-pervert cosplay cultures. The book is “an attempt to explain these paradoxes, …to give you a sense of Japan in ’3-D’, as it were.” (p.4) The author succeeds in his attempt. With his prodigious knowledge of both the Orient and Occident under his belt, he covers (or uncovers) a wide variety of topics. You do not get bored with the selection. After a page about Cool Biz, you meet Ninja the next. With so many snippets of insight about Japanese culture, history, people’s ethos, after a read, one becomes confident to say something intelligent & sensible about just about any topic about Japan. My favorite chapters are about “Harajuku girls” (p.88), “Hiking” (p.131), and “February: Valentine’s Day (or how a chocolate company orchestrated a cultural coup)” (p.207).

The book goes beyond a mere collection of facts and stories. It’s sprinkled with delightful aphorisms across the pages. Here are some examples:
“I like the kimono…They are loose-fitting and do not presume that everyone has a narrow waist in the way designer-label clothes do.” (p.87)
“Nothing, it seems, makes for better alcohol than holy thoughts.” (p.110, referring to the historical fact that priests in temples made high quality sake)
“As the saying goes, ‘You do not go to mountains to be enlightened. Rather, you go to mountains because you are enlightened.’” (p.131)
“If horse racing is the sport of British kings, then Japan’s royal sport must surely be hiking.” (p.131)
“Love may be timeless and universal, but courtship follows fashion.” (p.180)

The pictures are also highly admirable to look at. An Instagram in paper form.

In short, this book catches the zeitgeist of today’s Japan as well as of eons past; and satisfies curiosities of both cursory passersby as well as those self-professed Japan aficionados. Highly recommended. I personally hope to see future installments of its ‘second revised edition’, ‘third’, ‘fourth’, etc., down the line.

L A
5つ星のうち5.0 Brilliant!
2018年11月13日に英国でレビュー済み
Amazonで購入
I love learning about different cultures and love Japan, so I thought I'd give this book a whirl.
Yazawa did an excellent job introducing Japanese customs and cultural heritage. It's a great first look at many of the beautiful intricacies of Japan and its people. Whether you're curious about Japan or consider yourself a shinnichi, I highly recommend it!
続きを読む
6人のお客様がこれが役に立ったと考えています
違反を報告
レビュー を日本語に翻訳する