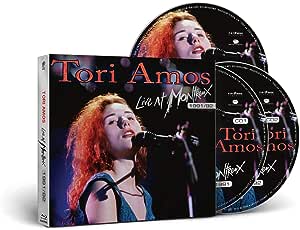 Two CDs + Blu-ray edition. Recorded just one year apart, Live At Montreux 1991/1992 captures two performances by Tori Amos right at the start of her solo career, in July 1991 and 1992, at the famous Montreux Jazz Festival. These two concert recordings are the perfect vignette of her career, featuring a barely known singer-songwriter on the first performance as well as Tori Amos on the brink of her breakthrough, a few months after the release of her massively successful debut album Little Earthquakes. Live At Montreux 1991/1992 brilliantly showcases the clear progression from one year to the next as Tori Amos grew in confidence and refined her musical craftsmanship at the second concert, not to forget that she also gave a wonderful performance in 1991, showcasing her unique charm. The tracklist of this set focuses on Little Earthquakes and features all the album's hits such as "Little Earthquakes" and "Crucify", however it also features rare songs from Tori Amos' early EPs, including her distinctive takes on Led Zeppelin's "Whole Lotta Love" and "Thank You" and Nirvana's "Smells Like Teen Spirit".

Brida
5つ星のうち5.0 A chance to go back in time
2008年11月8日に英国でレビュー済み
Amazonで購入
This double CD provides us with the wonderful chance to go back in time and hear 2 quite different concerts by Amos. CD1, from 1991, captures Tori just before the release of her debut album LITTLE EARTHQUAKES (I am discounting her true first release, Y KANT TORI READ, as this flopped). Here, you hear that there is a vulnerability to Tori - she comments upon not being used to playing in front of so many people, and during the song "Happy Phantom", she forgets one word. Rather than doing what she would now do - just replace it for another, meaning no-one would be any the wiser - she stops, and admits to the crowd that she has forgotten her lyric.
CD2 is from 1992, just after the release of LITTLE EARTHQUAKES, the album which got her the appreciation sh deserves. Here, you can hear that there is a difference despite only a year passing. She sounds more sure of herself. She also merges two songs together effortlessly ("Whole Lotta Love" and "Thank You"), which hints towards how she would develop as a live performer.

I love this album. Instead of Tori now, with her band behind her, you get just her and her piano. In my mind, this is often the very best way to experience her and her music. I also love that, despite being a huge fan for a few years, I still learnt something about her and her music; she explains that she played the song "Leather" for someone in the music business once, and he told her not to play it again or she would have no career. Quietly, but bravely, she thens says to the audience, "So I'm playing it".
For any fan of Tori, this CD is a must.