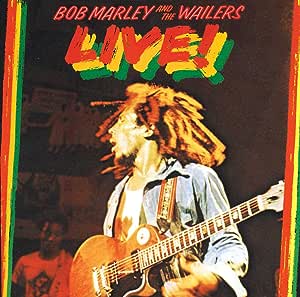 When Bob Marley and the Wailers recorded their legendary 1975 London gig, little did they know of its lasting power. From the opening shuffles of "Trenchtown Rock" to the rabble-rousing "Get Up, Stand Up," this brief recording captured Marley's combo of critical invective and languid musical power. The rhythm team of Aston and Carlton Barrett make time-keeping splendidly melodic as Marley's gently scouring voice gets woven in with his backup vocalists in a mellowly dazzling display. On fire, the band jumps into the discovery of its power without regard to keeping the songs tidy or reflective of anything other than the moment of execution. No matter the years between its original release and the present, this recording will always breathe. Between Live! and the later, longer Babylon by Bus, Bob Marley showed categorical know-how in the art of executing state-of-the-art performances in the era of arena rock's supremacy. --Andrew Bartlett

The Punk Panther
5つ星のうち5.0 and then Georgie would light the fire light....
2018年6月18日に英国でレビュー済み
Amazonで購入
Like “Catch A Fire” in 1973, this album was one that brought Bob Marley’s music to the attention of the “rock” mainstream. Everybody seemed to accept that it was a quality album, whether they liked reggae or not.

I like the album, but I always felt it was a few tracks short and that it concentrated on “message” songs - “Burnin’ And Lootin”, “Lively Up Yourself”, “I Shot The Sheriff”, “Them Belly Full” and the rousing “Get Up, Stand Up” - to the possible omission of some of Marley’s excellent, rocksteady-style romantic groovers, such as “Stop That Train”, the wonderful “Stir It Up” and “Put It On” all of which appears on 1973’s truly excellent “Live At Leeds University”. That is the finer Bob Marley & The Wailers live product, in my opinion, being a full concert set, as opposed the eight tracks we get here (only seven on the original release).

That said, this is an immaculately played, totally atmospheric live album, with the Wailers on top form, instrumentally. Just listen to the feedback from the crowd on the intro, the upbeat, pulsating “Trenchtown Rock”. It makes you wish you had been there at London’s Lyceum. Add to that the audible excitement that swells up from the crowd as the first organ bars of “No Woman No Cry” are played. one of the great moments in music.

Of course, the live performance here of “No Woman No Cry” has gone down in history as the definitive rendering of the song. It will never be bettered. It is the version everyone knows, as opposed to the comparatively thin and reedy studio original from 1974’s “Natty Dread” album. The bonus track now available on most formats of the album, “Kinky Reggae” is a great version too, extended to include the band introductions.
続きを読む
4人のお客様がこれが役に立ったと考えています
違反を報告
レビュー を日本語に翻訳する

Mandrek Larl
5つ星のうち5.0 Exceptional music that you can enjoy even if you're not a reggae fan ...
2020年11月17日に英国でレビュー済み
Amazonで購入
I have written before that I am not really a fan of live albums with their all too often poor sound quality and invasive crowd noises, but there are some that you just have to own and Bob Marley And The Wailers' "Live!" recorded at London's Lyceum Theatre in July 1975 is one of those. Regularly included in lists of all-time best live albums this really is a great album and one that deserves recognition, and not just because it gave the world the definitive version of "No Woman, No Cry" .

Unlike most live albums that offer a point in time greatest hits career retrospective, a sort of singles compilation with added crowd noise, at just seven tracks long the original release of "Live!" largely ignored the early Wailers catalogue, other than the album opener "Trenchtown Rock", a single from 1970, the music from the Lyceum focused on the then two most recent albums with three tracks each from "Natty Dread" and "Burnin'" [perhaps surprisingly there was nothing from their excellent breakthrough album "Catch A Fire" although my remastered edition from 2001 includes an excellent "Kinky Reggae" as a bonus track].

"Trenchtown Rock" sets a direction that doesn't ease up through "Burnin' & Lootin", "Them Belly Full" and "Lively Up Yourself" before the tempo slows for the beautiful "No Woman, No Cry". But it picks up again for a magnificent delivery of "I Shot The Sherriff" and a brilliant "Get Up, Stand Up", and that would have been it if it weren't for the bonus of "Kinky Reggae" extended to include band introductions. And here's the really good part, the sound quality on this remastered release is excellent and yes, there is an audience however their applause isn't invasive and they add to the atmosphere. But even with that bonus track at fifty and a few minutes it's all over far too soon.

There will always be arguments about whether this version of the Wailers was true to the spirit of the original group or a more commercial version designed to appeal to an international audience, but who cares, the musicianship from Marley and these five Wailers is superb, and the backing vocals and harmonies from the "I Threes" hit the spot, this really is magic music.

Recommended, this is music to enjoy even if you're not a reggae fan.
続きを読む
違反を報告
レビュー を日本語に翻訳する

Weevie54
5つ星のうち5.0 A definite addition for your collection 🇯🇲 Jah Rasterfari
2020年3月17日に英国でレビュー済み
Amazonで購入
Purchased 2 of these albums, one for my music producer son & 1 for me. Fantastic album, largely recorded in JA. Shows Bob Marley & band at their best, playing to a live audience. It's great to hear a live performance occasionally without all the wizardry of studio albums & you won't be disappointed with this release. Bob Marley was a genius & is sadly missed.
続きを読む
違反を報告
レビュー を日本語に翻訳する

billk
5つ星のうち5.0 The best live album ever
2017年10月5日に英国でレビュー済み
Amazonで購入
The best live album ever. The full 2 night recordings. It doesn't get better than this. I didn't get this gig, but saw the Exodus & Kaya tours. Plus Uprising at Crystal Palace Bowl. When will they release the full Babylon By Bus?
続きを読む
5人のお客様がこれが役に立ったと考えています
違反を報告
レビュー を日本語に翻訳する