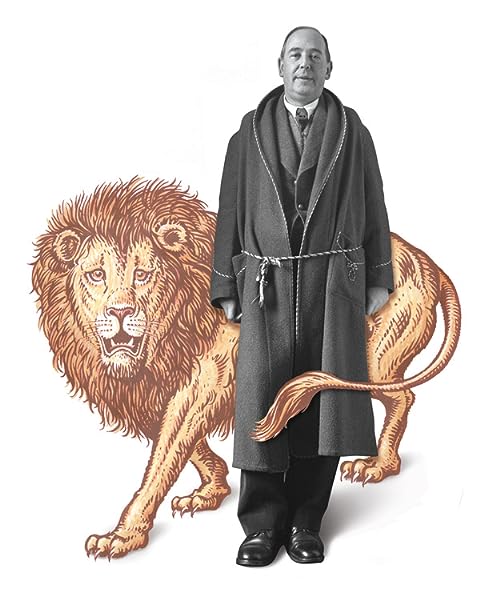 Clive Staples Lewis (1898-1963) was one of the intellectual giants of the twentieth century and arguably one of the most influential writers of his day. He was a Fellow and Tutor in English Literature at Oxford University until 1954, when he was unanimously elected to the Chair of Medieval and Renaissance Literature at Cambridge University, a position he held until his retirement. He wrote more than thirty books, allowing him to reach a vast audience, and his works continue to attract thousands of new readers every year. His most distinguished and popular accomplishments include Out of the Silent Planet, The Great Divorce, The Screwtape Letters, and the universally acknowledged classics The Chronicles of Narnia. To date, the Narnia books have sold over 100 million copies and have been transformed into three major motion pictures.

Pauline Baynes has produced hundreds of wonderful illustrations for the seven books in The Chronicles of Narnia. In 1968 she was awarded the prestigious Kate Greenaway Medal for her outstanding contribution to children's literature.

David OD (a teacher in Japan)
5つ星のうち4.0 Loved it as a child, was disillusioned as a college student, like it as an adult.
2013年8月4日に日本でレビュー済み
Amazonで購入
When I was a kid I liked the versions of this that were on TV, both the animated and live-action BBC version. The witch really scared me. When I read the book in Junior High I enjoyed it. When I reread it in a folklore class in college and had it pointed out that every one of the Narnia books is actually a Christian allegory, and that C.S. Lewis was a Christian apologist, I felt tricked and cheated. I don't like it when people try to sneak religion into things, especially for things like children's books. As an adult I respect the book (and series) for its achievement, and for its contrast to Tolkien's universe in the Hobbit and the LOTR. In my 20s I actually visited a pub in Oxford where Tolkien and C.S. Lewis apparently used to drink and discuss literature and life.

For English language learners, this book is very accessible, and has great teaching / learning points about life in England during WWII, family dynamics, honor, and yes even religious philosophy.

Ann Azuma
5つ星のうち5.0 Entrance to Narnia
2001年5月15日に日本でレビュー済み
Like the rabbit hole in ALICE IN WONDERLAND, the wardrobe is an unlikely but wonderful doorway to a magical, other world. Through it, the four Pevensie children step into Narnia-- land of talking creatures, a wicked and powerful witch, and the good and wondrous lion, Aslan. A battle is about to begin. The white witch, evil incarnate, has enchanted Narnia. As far as her rule extends, it is an unending winter but never Christmas. Peter, Susan, and Lucy soon begin their journey to meet Aslan. But when Edmund, the younger brother, first entered Narnia, he encountered the selfish "Queen" on his own and ate her enchanted turkish delight. He must struggle with his own desires and discover the true nature of the white witch, before he can join the others in the fight to wrest the self-proclaimed queen of her evil powers and restore Narnia and her inhabitants to its free and natural state.
My first encounter with Narnia, Aslan, and turkish delight was when I was in the fifth or sixth grade. It fascinated and thrilled me then. As an adult I reread it. Now, as a parent I am reading the series to my children. Time has not dimmed the clarity and radiance of the writing in this classic tale by C.S. Lewis.
続きを読む
4人のお客様がこれが役に立ったと考えています
役に立った
違反を報告
レビュー を日本語に翻訳する

Arachne202
5つ星のうち5.0 One Of The Greatest Children's Fantasy Books Ever Written
2015年10月27日に英国でレビュー済み
Amazonで購入
I've just read this aloud in instalments to my eight-year-old daughter. At first, I had to get past her laughter at the "I say, rather!" way the characters speak. ("How OLD is this book, Mummy?") But there was a little intake of breath when she realised this was a fantasy world where the characters could actually get killed. And then she was hooked. And she was reading extra chapters under the bedclothes after I'd left the room.

First published in 1950, this is one of the most classic portal fantasies ever written. Four children are sent from London to an old house in the country during the evacuations of World War II. Through a magic wardrobe, they enter the fantasy land of Narnia, which is a jumbled mixture of Greek mythology, Bible stories, and Arthurian romances, with a bit of Medieval Bestiaries thrown in and also a nod to George Macdonald. The White Witch has made herself Queen of Narnia, and put it under the spell of an ever-constant winter. With the arrival of the children and the lion Aslan, an old prophecy is met, spring comes to Narnia, and there is a major clash between the good and evil Narnians on who gets to dominate Narnia.

It is good writing to read aloud, and I can see why decades of schoolteachers have done so to their classes, including my own Year 3 teacher when I was a child. It's also a good silent read for children on the 8+years level. I had to explain the Adam and Eve story to my daughter, but otherwise the child doesn't need to already know the rich layers of references within it, which fed my own subsequent reading for years and years when I was a child - I wanted to know more about all the creatures C.S. Lewis had referred to! (Though I never did find out who the People of the Toadstools were.....)

Re-reading it again as an adult, what struck me was the influence of World War II. I have no idea how much C.S. Lewis followed the events of the war from his academic enclave, or how aware he was of the atrocities in Europe. But certain bits of the imagery - the wolf who was Chief of the Secret Police and visited victims in the night to trash their homes; the White Witch casually pointing her wand at a happy little family party at the side of the road and turning them to stone, in spite of Edmund's pleas - felt connected to it. And unlike the stone spells, deaths caused by gunfire can not be reversed.

My daughter hasn't got that far in her history lessons yet.
続きを読む
47人のお客様がこれが役に立ったと考えています
違反を報告
レビュー を日本語に翻訳する

Literature Fiend
5つ星のうち5.0 Summoned Back to Narnia
2018年4月20日に英国でレビュー済み
Amazonで購入
Yes, I’ve watched the films, who hasn’t? They’re great! But I had really fond memories of reading The Lion, the Witch and the Wardrobe when I was younger. And like the Pevensie children in the novel, I was drawn back!

This novel is by far the most popular in The Narnia Series, and it’s easy to see why. Published in 1950, it offers complete escapism for the reader; Peter, Susan, Edmund, and Lucy are evacuated from London to avoid the Blitz and are sent to a big house in the countryside. This is one location in the novel and the other, of course, is the magical world of Narnia.

Much of this story is etched into my memory from reading the books and watching the films but I did find one discover a part of the story (don’t worry, it’s not a spoiler) I’ve never really paid attention to before. It’s a conversation between Peter, Lucy, and Professor Digory Kirke, which goes like this:

“But there was no time,” said Susan. “Lucy had had no time to have gone anywhere, even if there was such a place. She came running after us the very moment we were out of the room. It was less than a minute, and she pretended to be away for hours.”

“That is the very thing that makes her story so likely to be true,” said the Professor. “If there really is a door in this house that leads to some other world (and I should warn you that this is a very strange house, and even I know very little about it) – if, I say, she had got into another world, I should not be at all surprised to find that the other world had a separate time of its own; so that however long you stayed there it would never take up any of our time. On the other hand, I don’t think many girls of her age would invent that idea for themselves. If she had been pretending, she would have hidden for a reasonable time before coming out and telling her story.”

I loved this part because you have two children worried about their little sisters sanity, only for a well respected Professor (and adult) to basically say, “Why not? Keep your minds open to other possibilities.” A great lesson for anyone reading this novel!

The writing style is very simple and easy to read which is such a difficult thing to achieve. I also really liked the little drawings scattered throughout the book. Overall, a brilliant story by C.S Lewis, and one which I feel has more than enough depth for adults and children to enjoy.
続きを読む
16人のお客様がこれが役に立ったと考えています
違反を報告
レビュー を日本語に翻訳する

Mrs. D.
5つ星のうち5.0 Of Its Time
2019年1月22日に英国でレビュー済み
Amazonで購入
People either like C.S. Lewis or they don't. As one of the former I wanted to re-read this book and found it to be exactly as I remembered, just the right length and language with the analogy easily understood by those for whom he was writing. Lewis was a man of his time and so, of course, is his teaching. For some this will have too old-fashioned a feel but truth has no time boundaries and I have yet to meet a child it fails to engross once properly introduced. It provokes thought and it is not necessary to be a child to enjoy this book or to learn from it. The allegorical nature and battle between good and evil, fall from grace and redemption can be appreciated at any level. It was worth re-visiting.
続きを読む
5人のお客様がこれが役に立ったと考えています
違反を報告
レビュー を日本語に翻訳する

sashaknits
5つ星のうち3.0 Turkish delight..
2017年10月12日に英国でレビュー済み
Amazonで購入
I definitely read these when I was younger, I can picture the box set we had in our house although I think it belonged to my brother rather than me. I also watched all the BBC adaptations when I was young, but have never seen the more recent movie versions. So my memories of Narnia overall were very vague: a wardrobe, a lion, winter, an evil queen, Turkish delight... That's about it. When this, what I still consider the first book in the series, came up on Kindle Daily Deal I thought I'd revisit.

Sadly, in this case, the adage "You can never go home again" more or less applies. Whatever magic Narnia held for me when I was younger, the actual writing and the age of the original work have not held up against time. The Christian allegory is not subtle. The children's behaviour is strangely starched and/or grown-up. The pace is so super-fast that some dramatic events are over so quickly you hardly get time to absorb them at all. I almost felt like if I blinked I would miss something, even in print.

The concept was charming enough and I may read the others if they come up cheap on Kindle in future, but I think I'm lacking enough nostalgia to be excited about continuing.
続きを読む
5人のお客様がこれが役に立ったと考えています
違反を報告
レビュー を日本語に翻訳する

Jon S
5つ星のうち4.0 Description on the CD is misleading as this isnt the BBC dramatisation produced version.Instead its the Radio Theatre one
2017年12月22日に英国でレビュー済み
Amazonで購入
Warning this is not the BBC Radio produced version but the `Radio Theatre` Company version that the BBC many years after played on their station.Although still very good and with a great cast I didnt find this as magical or adventurous a version.
続きを読む
12人のお客様がこれが役に立ったと考えています
違反を報告
レビュー を日本語に翻訳する
すべてのレビューを参照します
Amazonプライム会員ならお急ぎ便、日時指定便が使い放題
さらに、映画もTV番組も見放題。200万曲が聴き放題 。クラウドに好きなだけ写真も保存可能。
> プライムを無料で試す