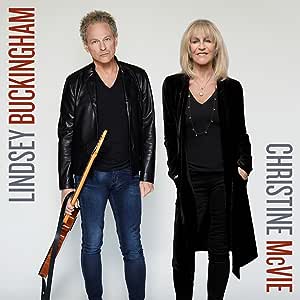 Dizmog
5つ星のうち5.0 Brilliance from two masters
2017年7月31日に英国でレビュー済み
Amazonで購入
I bought this album on the strength of hearing radio-play of the first two singles, In My World & Red Sun. And knowing that Lindsey Buckingham & Christine McVie are quality song crafters & always work well together I had no qualms purchasing the album on that basis. Was I proved right or what? The first 7 tracks are almost sublime in my opinion; it really is top-notch song writing. Buckingham/McVie have an uncanny knack for a hook or chorus that just draws you in immediately in a very understated way. Of course, having one of pop music's best rhythm sections - Mick Fleetwood & John McVie - contributing to the mix does help! It could be a Fleetwood Mac album in all but name. Anyway, following the seven superb songs-in-a-row brilliance comes a much slower piano-based track, Game Of Pretend, sung by Christine McVie. It's a strong, reflective song beautifully executed. The next song, On With The Show, actually seems a bit out of place considering what's gone before; but that's a minor quibble. The album finishes with Carnival Begin - a lush grower of a track, also slower in tempo. Die-hard fans of Fleetwood Mac and/or Buckingham/McVie will buy this but I'd unreservedly recommend this album to anyone who appreciates quality song writing. You won't regret it.
続きを読む
19人のお客様がこれが役に立ったと考えています
違反を報告
レビュー を日本語に翻訳する

Humf
5つ星のうち5.0 To Buckingham and McVie: A Winner
2017年7月17日に英国でレビュー済み
Amazonで購入
To compare this with most cfurrent pop music is akin to comparing the Shard to potting sheds. I received the disc on 09.06.17 and have played nowt else since. It may be a case of 'Chacun a son Gout' (as we say up here in the North), but this is a storming good disc: I shall refrain from naming any particular favourite number, as passages from most keep recurring when least expected. (bit like indigestion).
続きを読む
7人のお客様がこれが役に立ったと考えています
違反を報告
レビュー を日本語に翻訳する

Digital Spork
5つ星のうち5.0 The Mac Are Back Again!
2017年6月24日に英国でレビュー済み
Amazonで購入
When I heard Lindsey Buckingham and Christine McVie of Fleetwood Mac stardom were going to collaborate on a duets album, I was in awe. I love both of them to pieces and together they have written and concocted some of the greatest songs of all time.

However, this isn't a 'duets album'. Let me make that clear first of all. It's a Fleetwood Mac album. Just without Stevie. It features legendary Mick Fleetwood on percussion and John McVie on catchy bass, however no Stevie Nicks. And ultimately, as much as I adore the Gold Dust sorcerer, this album is still amazing, despite her noted absence.

The sound of it, I'm sure we can all agree, is a little more 'modern' and 'poppy' than their usual stuff, but hardly far from what we're used to. Every song is still enriched with that 'Mac-y' sound, and the lyrics of Buckingham and McVie still shine through as meaningful, not that overplayed, ambiguous crap we here endlessly these days on the radio.

So, I'll go through the album song by song, and ultimately rank everything else with it. 'Sleeping Around The Corner' - Personally one of my favourites from the album, and a great - though perhaps there were better choices - album opener. Avid fans of the mighty Buck may remember this as a bonus track from his previous album, 'Seeds We Sow'. This version has another bridge, as well as, of course, Christine's vocals. Though, NOTE: I should make it clear there's a slightly disappointing lack of their vocals 'coming together' in this album. It's usually one singer or the other, occasionally with Lindsey's tone-altered 'ooh's and 'ahh's over the top. Nevertheless, 'Sleeping' is a very catchy track that should get you in the mindset for the next 40 glorious minutes of your life.
'Feel About You' - Okay, so this is probably one of the weaker tracks on the album. It's still a very catchy tune, but the lyrics are a tad bland and the song is probably the most 'generic' from the album. However, despite that we still get our first insight into Christine's still-on-point vocals. I feel the whole album isn't meant to be taken completely seriously. It's a bit of fun. And it delivers.
'In My World' - The first track we EVER heard from this album, and arguably thus, the most played. It's just brilliant. 'Quaint' is definitely the word you'd use to describe it, but boy, the lyrics are MONUMENTAL. Just take a close listen to them and you'll relate to them in some way, it's one of Lindsey's highest points in the last decade or so, and from the arrangement to the lyrics, there's little I could ever want to change. Even featuring background 'ooh's reminiscent of the 'Tango in the Night' era of the Mac saga.
'Red Sun' - My second fave from the album, and one of the songs to feature more McVie/Buckingham fusion. Again, it's catchy, brilliant, and a song I would never want to skip. The chorus alone is so tranquil.
'Love Is Here To Stay' - Probably the song that most encompasses the whole story behind this album; Lindsey and Christine's love for eachother as musical gods, and how that led to this very point. Here we see Lindsey's slightly huskier tone, and there's not much more I can say other than it's a good song, if a little bland at times.
'Too Far Gone' - I ADORE this tune. It's catchy from start to finish, features a nice guitar lick from Lindsey and amazing drum work from Fleetwood himself. To historians of the Mac, you may hear a distinct similarity to the 1975 White Album tune, 'World Turning', which is, again, outstanding. I cant fault how this is essentially a more modern version of that because it's still a great tune, and I listen to this on a daily basis. Trust me, this will likely be in your top 3.
'Lay Down For Free' - A song with a strong message that Lindsey will not 'lay down for free' - He will keep on going, and with a message like that, the song only has to be as good, right? Well, the short answer is yes.
'Game of Pretend' - Finally a trademark Christine song! Instantly settling back into the more quiet and powerful track, 'Game' is the kind of tune to rival the likes of 'Songbird' and 'Over & Over'. So refreshing to hear that pure Christine come through. Only a shame we don't hear much more of it.
'On With The Show' - Again, fitting straight in with the entire story of the album, this song is a change back to familiar, slightly pop-rockish roots, and an almost bittersweet reminder that our time with the album is almost up.
'Carnival Begin' - An odd name for an odd song, is all I can say. It must be said, this track is my least favourite from the whole album, but don't think that means it's bad. It's a much slower, but more guitar-heavy song, slightly experimental (I could see it among the tracklist of 1979's 'Tusk', if I'm honest) and overall, probably 6.5-7/10 worthy.

So there you have it. I would DEFINITELY suggest buying this, if only to update your journey of Fleetwood Mac through the years. This could very well be the last album to feature even TWO of the band's members, let alone FOUR. The absence of Stevie's earth-shatteringly beautiful and haunting lyrics, along with her bogglingly powerful voice are missed at first, but as you continue through this Homeric Odyssey of music, you'll begin to find that thought disappear, until eventually, by the time 'Carnival Begin' has come to a close, you'll be saying, 'Stevie WHO?'
続きを読む
8人のお客様がこれが役に立ったと考えています
違反を報告
レビュー を日本語に翻訳する

Trisha Taylor
5つ星のうち5.0 Let's just call it what it is... a Fleetwood Mac. But can't, for legal reasons.
2017年9月17日に英国でレビュー済み
Amazonで購入
I love this. Wasnt sure at first but it's a real grower. Its constantly on in the car and my four year old daughter loves it too. Shame it's not just called a Fleetwood Mac album since that's what it essentially is: the rythymn section on tracks is Mick and John, and the tracks were intended for a new Mac album, it's just missing Stevie who was too busy elsewhere. Quite poppy with some instantly catchy songs and slower burners too. Just hope on the upcoming Fleetwood Mac 2018 tour they play some of these gems.
続きを読む
8人のお客様がこれが役に立ったと考えています
違反を報告
レビュー を日本語に翻訳する
すべてのレビューを参照します
Amazonプライム会員ならお急ぎ便、日時指定便が使い放題
さらに、映画もTV番組も見放題。200万曲が聴き放題 。クラウドに好きなだけ写真も保存可能。
> プライムを無料で試す