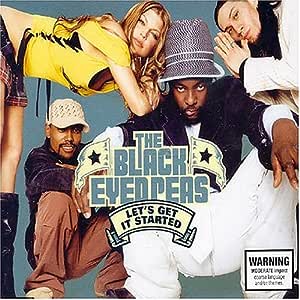 Nathan Freeland
5つ星のうち4.0 It's funny and cool.
2013年6月11日 - (Amazon.com)
Amazonで購入
It has all the makings of a good pop-Hip hop single. If you wanna get the funny though go the uncensored Let's get retarded which is pretty funny although I just use it as a funny party song. No offense to the mentally challenged out there. And The Way you make me feel is pretty funky with a nice guitar line in there, so it's pretty good. Don't know If Imma buy Elephunk with it.
続きを読む
レビュー を日本語に翻訳する

Aster
5つ星のうち4.0 Black Eyed Peas' "Let's Get It Started 1" Review
2014年2月13日 - (Amazon.com)
Amazonで購入
I really like this CD. I have given it a 4 star rating because it is a great song and I really like this band for their energetic music.
続きを読む
レビュー を日本語に翻訳する

ANDROIDtyler
5つ星のうち5.0 Best Song of The Year
2004年11月18日 - (Amazon.com)
In August,I had bought the album "Elephunk", and I thought that "Let's Get It Started", was on there as a hidden bonus track as I had heard. I was wrong. I know that people prefer "Let's Get It Started" over "Let's Get Retarded", because some find the latter offensive. I don't, but I do like the former radio mix better. No because of the language, but because of the music. The radio mix has a mot more percussion thrown in which gives it a lot of punch. It also has additional instruments that are NOT present on the album version. I recommend that you get this single if you have the iriginla version of the "Elephunk" album, for "Let's get It Started" because it is worth it. also the album version is on here, so you can compare the music to the two. Also included is a really good smooth song called "The Way You Make Me Feel", from their other album "Bridging the Gap".
続きを読む
7人のお客様がこれが役に立ったと考えています
レビュー を日本語に翻訳する
Amazon.comのカスタマーレビューを見る(19) 5つ星のうち3.6
Amazonプライム会員ならお急ぎ便、日時指定便が使い放題
さらに、映画もTV番組も見放題。200万曲が聴き放題 。クラウドに好きなだけ写真も保存可能。
> プライムを無料で試す