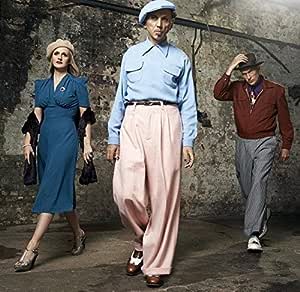 Double vinyl LP pressing in gatefold jacket including digital download. 2016 release from Kevin Rowland and Dexys (formerly Dexys Midnight Runners). The album is a body of work which sees Dexys putting their heart and soul into every track that Kevin has wanted to do since the mid-1980s. Drawing on Rowland and co-producer/core band member Sean Read's Irish roots, the album is a combination of their interpretations of Irish songs and other select compositions. Each song has been given at least the same level of attention and care as any of their own songs would be. This record is not a stop gap, or a fill in album. It is not a covers album. "The album is called Dexys DO Irish & Country Soul: DO it, not BECOME it," Kevin emphasizes. "We're not trying to be Irish, and we haven't used too many Celtic instruments on there. It's our sound. We're bringing our style to these songs. I'm just a guy who follows my intuition, my inspiration. This really felt like the right thing to do. We have put probably more care and attention into these songs than we might have done with our own songs, because the odds were high. It was important to get them right, and make sure every one of them felt relevant to us."

Mick Duffer
5つ星のうち4.0 Music the way it was intended to be
2016年9月6日 - (Amazon.com)
Amazonで購入
Just about faultless. A joy to listen to, especially if you have some Irish in you. Proper music.
続きを読む
レビュー を日本語に翻訳する

screenplay writer (and scrap metal scavenger)
5つ星のうち5.0 They haven't failed yet!
2016年8月2日 - (Amazon.com)
The new album is as good as you might have hoped, if you've heard and enjoyed the band's reunion CD from 2012, "One Day I'm Going To Soar". "One Day" was the 4th Dexys' album, separated from their third by 27 years. It was a fine follow-up, showing little signs of the band's age. On the 2016 album "Let The Record Show", the band sounds as if they're still rolling off the momentum of "One Day". Kevin's singing on the new album is slightly restrained, but he keeps you hanging in there none-the-less, with his phrasing and passion.
続きを読む
1人のお客様がこれが役に立ったと考えています
レビュー を日本語に翻訳する
Amazon.comのカスタマーレビューを見る(4) 5つ星のうち3.9
Amazonプライム会員ならお急ぎ便、日時指定便が使い放題
さらに、映画もTV番組も見放題。200万曲が聴き放題 。クラウドに好きなだけ写真も保存可能。
> プライムを無料で試す