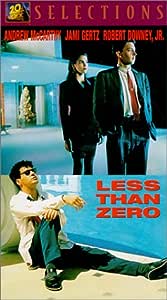 Dreary, pointless late-'80s novel by literary poseur Bret Easton Ellis focused on listless, shiftless, drug-sniffing, sex-swapping, dead-end California teens with too much money and time on their hands. Which just about sums up this movie, though it's not nearly as interesting as that. This is mostly due to the ridiculously cleaned-up script and lifeless direction, which whitewashes the baser depravity and replaces it with perversion-lite and fashion shows. It doesn't help that director Marek Kanievska is saddled with Brat Pack lesser (make that least) lights Andrew McCarthy and Jami Gertz. The only things that lift this film above the muck are the performances by James Spader as a particularly heinous drug dealer and Robert Downey Jr. as a rich-kid addict with no self-control. --Marshall Fine

Elwyn Roberts
5つ星のうち4.0 A glossy, at times difficult to watch, but entertaining and ultimately rewarding anti-narcotics parable.
2017年2月3日に英国でレビュー済み
Amazonで購入
A great cinematic encapsulation of drug addiction within the rich and famous of Beverley Hills during the 1980s. I've always wanted to see this movie since I was a child after watching it's great trailer, now that I have watched Less Than Zero (1987) the movie itself doesn't quite live up to the thrilling potential shown in the trailer. Robert Downey, Jr is amazingly charismatic as Julian, fizzing on-screen whenever his character's high on narcotics or displaying fragile vulnerability when he's at several low ebbs. Andrew McCarthy and Jamie Gertz are great also, the trio of these characters pining for lost dreams and optimism forever lost somewhere from the moment they graduated from high school, to their present standing in adult life. James Spader as the drug dealer, Rip, also shows his future leading man charisma to full effect. On the DVD extras front, there are no trailers or commentary tracks or even an EPK making-of. The English soundtrack is presented in Dolby Digital 4.0 and the picture quality is good overall.
続きを読む
5人のお客様がこれが役に立ったと考えています
違反を報告
レビュー を日本語に翻訳する

Nathan
5つ星のうち3.0 Puts you're own life in perspective - at least for me.
2015年2月26日に英国でレビュー済み
Amazonで購入
'Less Than Zero' is a 80s film that takes an intimate look at addiction, teen drug use and how it impacts relationships. Although its not quite on par with say American Psycho, less than zero is great way to spend 90 minutes. I lean toward's Robert Downey's performance as its rather compelling and always nice to see him in a role that he owns (as always) and his character seems to mirror himself or later self in regards to his own drug addiction and personal struggles. So in summary check this film out if you're curious - it is what it is. its hip to be square.
続きを読む
1人のお客様がこれが役に立ったと考えています
違反を報告
レビュー を日本語に翻訳する

Sim
5つ星のうち5.0 Thank the Lord that RDJ recovered.
2016年3月24日に英国でレビュー済み
Amazonで購入
This is a very tough film to watch, as it is the story of one mans fight ( as well as the fight of his friend's ) against the onslaught of addiction. Yet, it is brilliantly written, filmed and acted. I highly recommend that anyone who adores RDJ ( as I do ), give it a viewing pronto.
続きを読む
1人のお客様がこれが役に立ったと考えています
違反を報告
レビュー を日本語に翻訳する
すべてのレビューを参照します
Amazonプライム会員ならお急ぎ便、日時指定便が使い放題
さらに、映画もTV番組も見放題。200万曲が聴き放題 。クラウドに好きなだけ写真も保存可能。
> プライムを無料で試す