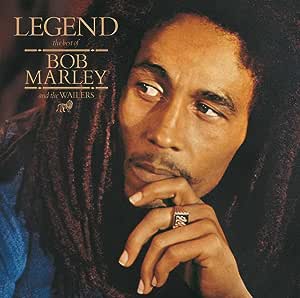 Even as greatest hits packages go, this is an utter gem. Every song is inspired, in a class of its own, whether the real version of "I Shot the Sheriff," the hymnlike "No Woman, No Cry," or the sheer joy of "Jamming." Even allowing that Marley never wrote any bad material, then Legend is still the crème de la crème, the heart and soul of the Jamaican people packed into one five-inch compact disc. He was unique, and the message of this record, more than any other, is that he died far too soon. --Chris Nickson

D J F
5つ星のうち5.0 Deservedly the biggest selling reggae album of all time
2019年7月4日に英国でレビュー済み
Amazonで購入
This album is the biggest selling reggae album of all time with worldwide sales currently topping 28 million and it's easy to see why despite criticism of it's content from some quarters. That criticism centres on the sanitation of Marley's political content in favour of a selection of songs that would find favour with a majority of listeners. That's really an unfair criticism because the prime purpose of any Greatest Hits/Best Of collection is to introduce an audience to the most accessible side of an artist, with hopefully some of those listeners deciding to investigate the deeper catalogue for themselves. This collection clearly works on that basis, spending years troubling charts and containing all of Marley's UK hits backed up by a selection of popular album tracks. Originally released in 1984, it's longevity can be put down to the simply fabulous track selection, now expanded from the original 14 to 16 tracks with two bonus tracks Punky Reggae Party and Easy Skanking. What isn't so apparent is the full length rather than single edits of all the tracks are now present taking advantage of CD's ability to contain more music than vinyl giving even more value. The definitive live version of No Woman, No Cry is here, as are the marvellous I Shot The Sheriff, Jamming, Could You Be Loved and Buffalo Soldier, all standouts in an album of already exceptional quality. This might be reggae-lite but it's extremely accessible and really does show what a Legend Marley was. If you only owned one reggae album you'd be hard pressed to find a better one.
続きを読む
7人のお客様がこれが役に立ったと考えています
違反を報告
レビュー を日本語に翻訳する

snerg
5つ星のうち3.0 Poor CD mastering, not the best sound.
2019年7月10日に英国でレビュー済み
Amazonで購入
Great album but the mastering on this CD is lacking. It sound as someone has took tape record and tried to upscale it to 16bit CD quality and did it that way to keep the oldshool flavour in. In the end you'll get a bad soundstage and flat sound that is trying to mimick who knows what - and I tried on many different setups... I'll keep the CD as an example of a bad product.
If you are looking for a proper CD quality of this album look elsewhere. This particular release is no good or satysfiing.
続きを読む
2人のお客様がこれが役に立ったと考えています
違反を報告
レビュー を日本語に翻訳する

The Fox
5つ星のうち5.0 Great Album - Best introduction to Bob marley
2020年6月23日に英国でレビュー済み
Amazonで購入
I had this in the 1989, when my hair was down to my shoulders wearing a black leather coat, being a rocker back then, this was my goto chill out album. But this album it's cool 😎 this is NOT a fake review or paid for review. This is the truth as I truly believe. So you can buy with confidence.
続きを読む
2人のお客様がこれが役に立ったと考えています
違反を報告
レビュー を日本語に翻訳する

Caroline S
5つ星のうち5.0 Brilliant Bob
2017年10月28日に英国でレビュー済み
Amazonで購入
Bought this CD which although was classed as used was in a brilliant condition, sound quality good and played well. The only thing I found somewhat cringy was on track no. 10 ('I shot the Sheriff') which was spoilt by the so called chorus singing between Bob's vocals - singers they were not! Apart from that all sixteen tracks were great. Such a shame that he was only 36 years old when he died. Definitely recommend.
続きを読む
3人のお客様がこれが役に立ったと考えています
違反を報告
レビュー を日本語に翻訳する

stephen camps
5つ星のうち5.0 Worth it for the Bass Rattling Exodus alone
2020年11月13日に英国でレビュー済み
Amazonで購入
Rarely are hits packages full of Hits you know and love. They are all here; Three Little Birds, Redemption Song, No Woman no Cry, Stir it Up, Buffalo Soldier and many many more. Will make you happy and sad, reflective and grooving just like great music should.
続きを読む
違反を報告
レビュー を日本語に翻訳する
すべてのレビューを参照します
Amazonプライム会員ならお急ぎ便、日時指定便が使い放題
さらに、映画もTV番組も見放題。200万曲が聴き放題 。クラウドに好きなだけ写真も保存可能。
> プライムを無料で試す