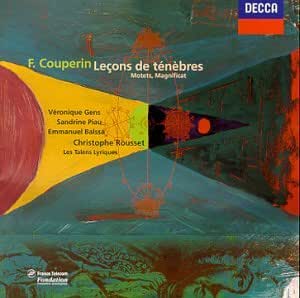 jt52
5つ星のうち5.0 The “Two Sopranos” do Lecons de Tenebres
2015年2月12日にアメリカ合衆国でレビュー済み
Amazonで購入
For those who love streamlined baroque soprano singing, ethereal, sleek, with carefully-prepared dissonances and resolutions and a sound that is sheer and beautiful, this release is for you. Two of the best sopranos to emerge from France in recent decades, Veronique Gens and Sandrine Piau, join with early music specialist Christophe Rousset and the ensemble Les talens lyriques to cover Francois Couperin’s Lecons de Tenebres (1714) as well as three notable earlier sacred works that are in no way throw ins. Thought the texts of the Lecons describe the destruction of the temple of Jerusalem, Couperin’s writing, with astute and assured voice leading, projects a calm and luxuriant Catholicism and does not emphasize this tragic theme.

Piau, with a more unusual and lower voice than her partner, takes on the first Lecon. Gens, whose extraordinary version of Hector Berlioz’s “Nuits d’ete” has engraved itself in my memory, takes the higher part and the second Lecon. The concluding “Jerusalem” section of this second Lecon as sung by Gens has to be on the highlights, graceful and soaring. Both sopranos join together for the 3rd Lecon, where Couperin’s contrapuntal ability is fully on display. The performers have sequenced the Lecons as they are normally done, but this ordering is done to enhance the set’s cohesion and not based on historical sources. In fact, several of Couperin’s Lecons have been lost, so the three Lecons that have come down to us form a fragment. This can be heard musically as the last section of the 3rd Lecon ends inconclusively, not like a traditional structured conclusion. In contrast, the excellent version of the Lecons on Erato led by Laurence Boulay reorganizes the three Lecons to no ill effect. Listening to the Boulay also underscores how the performers in this disc have conceived and executed their Lecons as sleek and elegant. Boulay’s continuo is comparatively busy while Rousset uses a minimum of notes, the soprano lines winding around a steady and relatively simple organ-and-bass accompaniment. I also compared the performance with that from William Christie and Les Arts Florissants and found that, though the two share a similar approach, Gens and Piau inject much more life and emotion into their rendition, making it preferable.

Two Motets and the Magnificat, which are dated by scholars back to the 1680s so represent an earlier mid-baroque style, related but different from that of the Lecons, fill out the release. All three are beautiful and worthwhile. Clocking in at right over 10 minutes, the Magnificat may be my single favorite track here, livelier and little less serene than the other music.

This disc is exemplary and beautiful. I suspect some listeners will absolutely love it for its ravishing and exalted cumulative effect. Helped by some very fine sound engineering, it is warmly recommended.