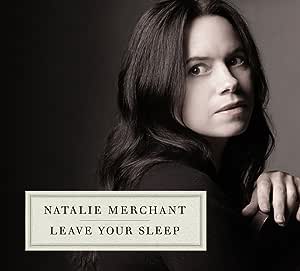 2010 two CD release from the former 10,000 Maniacs vocalist. Leave Your Sleep is a collection of songs adapted from poems selected by Merchant including pieces by both well-known and obscure writers. Featured are works by British Victorians, early- and mid-20th century Americans and contemporary writers as well as anonymous nursery rhymes and lullabies. Among the authors included are Ogden Nash, E.E. Cummings, Robert Louis Stevenson, Christina Rossetti, Edward Lear, Gerard Manley Hopkins, and Robert Graves. In addition to a new method of lyricism, Merchant stretches out musically on Leave Your Sleep by collaborating with a broad spectrum of artists including the Wynton Marsalis Quartet, Medeski Martin & Wood, members of the New York Philharmonic, The Klezmatics, Lunasa and Hazmat Modine.

R. Carroll
5つ星のうち5.0 double delight from Natalie Merchant
2017年6月17日に英国でレビュー済み
Amazonで購入
I only bought this cd because it was cheap and didn't really think much of the sample tracks I'd played, but, being a long time fan of MN, I decided to take a punt and bought it... After receiving it very promptly, I was very surprised and delighted at the all round quality of the two cds and the amazing history of the poems in the beautifully produced booklet they came in. The booklet itself must have cost a fortune to produce and is a credit to the guy(s) who produced it. There are twenty tracks to listen to and I feel that if a person only enjoys a quarter of them, it will be well worth the price paid for the double album.
Greetings to all other MN fans around the world.
Ron Carroll,
Auckland,
New Zealand
続きを読む
1人のお客様がこれが役に立ったと考えています
違反を報告
レビュー を日本語に翻訳する

P. Barnfather
5つ星のうち5.0 Charming, delighful and quite wonderful
2010年7月2日に英国でレビュー済み
Amazonで購入
Years in the making, this epic double album finds Natalie Merchant at the very top of game. The premise of nursery rhymes and poems set to music at first seems a little underwhelming, but her music and voice bring these simple tales to life in a way that is utterly captivating. It is easily one the most impressive works by any artist in recent years.

The supporting booklet is also beautifully produced. Even though this package might seem "expensive" compared to a typical CD, I highly recommend the full length edition. It's actually something of a bargain.

MD
5つ星のうち5.0 Fantastic in one word!
2020年8月25日に英国でレビュー済み
Amazonで購入
I got surprised how well presented this album is! The quality is out of this world. I really enjoyed the packaging, the presentation, the sound quality and most important of all, the music itself!
続きを読む
違反を報告
レビュー を日本語に翻訳する

Penelopepouts
5つ星のうち5.0 Most definately for children and the child within!
2012年5月3日に英国でレビュー済み
Amazonで購入
Having read the reviews for this album I am amazed some say this is not a good album for children??! I can only presume these reviews were written by the childless or by those suffering with 'grownupishness'? If you are considering this cd for a child, do not be put off, read on, then buy the cd for the child you had in mind!

I have a 5 year old daughter, who not only loves this album, but sings along to the songs, and sings the songs herself whilst playing in the garden. Her favorites are The Dancing Bear, Bleezers Ice Cream, Equestrienne, maggie and milly and molly and may, and The sleepy Giant, although she likes the whole album.
When the cd arrived, I explained the songs were poems, and showed her the book. She likes the different styles of music and the idea that some of the songs are very very old and that her Great Great Great Great Great Great Grandma and Grandad probably knew some of the rhymes as well. Whenever she asks about a song, I tell her a little about it, who wrote it, or how long ago and what games children played at that time or what they wore, and sometimes why a poem was written, or a little story of the writers life. Nothing heavy, little snippets, and silly bits that children like. She likes the fact that some of the grown up writers were quite naughty. She was inspired by the fact one of the songs was written by a young girl. Since discovering The Sleepy Giant was written by a father for his son, she has been dropping me hints to do the same! To her the idea that the album came abouts because another mummy wanted to share these poems with her daughter is one of the lovliest things. In short she is captivated by every aspect of this album.
This cd should feature on the national curriculum, it helps with reading, vocabulary, rhyming schemes, story telling, memory, recital, it gives a hint of times gone by and social history, it shows diferent musical styles and instruments, some in a geographical sense, it expands the imagination and make the child ask questions. It has silly songs, happy songs, sad songs and whimsies, it is full of the magic and enchantment of children and childhood. I wish more musicians would create music for children like this.
I feel I should add that 100% of children that have heard this album via my daughter have been captivated (age range 3-15). Some of these children(to their credit) have used pester power or pocket money to secure their own copies.
続きを読む
違反を報告
レビュー を日本語に翻訳する

DiveDoc
5つ星のうち5.0 Simply the best...
2011年8月20日に英国でレビュー済み
Amazonで購入
... collection of songs that I have heard in a long, long time. A simple but strong idea, immaculately translated into music of depth, subtlety and emotional power. The wistful melancholy of so many "children's" poems is rendered so well that some of the songs brought me to tears, whilst a couple of the songs are merely deliriously joyful. The best?
"Nursery Rhyme of innocence and Experience", "The Dancing Bear", "maggie and milly and molly and may", "Adventures of Isabel", "Spring and Fall: to a young child" and "Indian Names".
続きを読む
1人のお客様がこれが役に立ったと考えています
違反を報告
レビュー を日本語に翻訳する
すべてのレビューを参照します
トップへ戻る
Amazonについて
Amazonでビジネス
Amazonでのお支払い
ヘルプ＆ガイド
日本語ショッピングのための言語を選択します。 日本ショッピングのための国/地域を選択します。
© 1996-2020, Amazon.com, Inc. or its affiliates