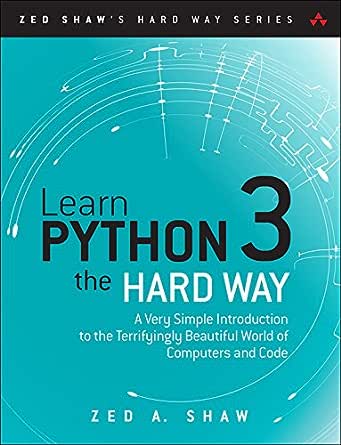 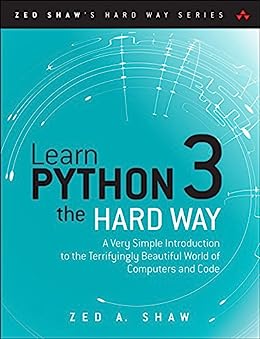 Zed A. Shaw is the author of the popular online books Learn Python the Hard Way, Learn Ruby the Hard Way, and Learn C the Hard Way. He is also the creator of several open source software projects and has been programming and writing for nearly 20 years. Most of his free time is devoted to the study of painting and art history.

Horse Birthday
5つ星のうち1.0 Useful to a very limited degree, then it falls to bits
2018年11月22日に英国でレビュー済み
Amazonで購入
At first, I liked the cocky, "hardline" style of this book, and cheerfully rattled through drills. However, it all went horribly wrong when the book got to the section on OO programming - a concept I am familiar with from other languages. Rather than explaining how it works in Python, the author editorialises and rants in a frankly unhelpful manner. This appears to distract him from covering the core material, and the whole thing goes off the rails. In the end, I gave up on this book, and used the free online docs to help me get a small project working.

In the end, I went back and re-learned from scratch, from a much better book:

It was far clearer on things like object vs instance attributes, or stuff like where you're copying an object or passing a reference to it- things that could really bite the unwary. It's a much better-written book that teaches much better habits.

This one is very hard to recommend, and now I can understand why it's so disliked in the Python world.
続きを読む
30人のお客様がこれが役に立ったと考えています
違反を報告
レビュー を日本語に翻訳する

myol
5つ星のうち2.0 Learn basic coding the hard way, using python 3
2018年11月19日に英国でレビュー済み
Amazonで購入
This book is aimed at beginner coders and teaching them to code, with python being the language to facilitate that. This book is not aimed at people with existing basic coding knowledge that would like to learn the specifics of the python language and its overall paradigm.

I feel the name is a terrible misnomer.

I have read that many people learn python coming from existing languages and end up coding in a very similar way and as such, never really take advantage of the powerful features and coding philosophy of python - i.e. coding 'pythonically'. Given the name of the book, I thought this book would address that.

In this book I learned about the basic python syntax, printing (a lot), importing modules, basic IO and some things in python not implemented in the existing languages I know (tuples, dictionaries - some of their methods, etc). I got a tiny glimpse of the python paradigm of why len(X) is a thing instead of X.len(), but was told to google to find out more.

After that, the basic concepts of loops, vars, assignment etc are covered until the idea of OOP and then ...the author basically says, do it yourself and google it. Seriously. And the remainder of the book is like that - from 50% onwards!

For learning python as a language, just use youtube and save your money. I can't get a refund because I discovered the 'do it yourself' mentality on day 8, since up until then, the exercises are pretty exhausting due to how repetitive they are (which is good for my type of learning) and there is very little python specific language features to learn from that point on.

For people that think that self research is a good thing, I do not disagree, but for a £20 book to tell you to use the internet, it seems like a kick in the teeth. Although given the historic drama the author had towards python 3 (I will let you 'google that yourself' to see what I mean), I feel the 'do it yourself' flippant and condescending mentality in this book lines up with his views on his website, regardless of a forward disclaimer...
続きを読む
13人のお客様がこれが役に立ったと考えています
違反を報告
レビュー を日本語に翻訳する

Anonymous
5つ星のうち1.0 So disappointed
2019年8月17日に英国でレビュー済み
Amazonで購入
This book was brilliant...until Exercise 13! The instruction is terrible and poorly explained, I've googled and googled read all kinds of garbage about how to solve it, nothing works. There are loads of people who've had problems with this section, that's likely an indication the author hasn't thoroughly explained the process of commands properly. The author is so busy being sarcastic and such, maybe he should focus on teaching, in simple terms, how to learn python. It says to read the WYSS section to learn how to run this code but doesn't indicate where that section is. Really poorly written!!! So disappointing as I was really enjoying it, up to that point. Was going to buy the second book on learning python but won't be. Save the sarcasm and explain topics step by step. Beginners have zero reference points...remember that!
続きを読む
6人のお客様がこれが役に立ったと考えています
違反を報告
レビュー を日本語に翻訳する

Bridget Kelly
5つ星のうち5.0 Brilliant for Beginners, and an Intermediate Refesher
2020年4月14日に英国でレビュー済み
Amazonで購入
I originally purchased this book for a senior developer who wanted to go from Java to Python to keep his skills updated. When I got the book I had a quick flick through and I knew I would need to purchase it myself. I'm a full stack developer myself and last year I came over to backend and started learning Python, then jumped straight onto Django (advanced, got pretty good at it) but I found that when it came to writing some functions, classes I was still struggling as I didn't understand partly the logic and words like 'args' and 'kwargs' , functions how to write them, let alone the ruling of what if , else statements, as it wasn't explained online very well, no matter what course or tutorial I took, other issue was what version had I been learning Python in? Was it 2/3 god knows, no one ever wrote down the version.. hence why some of my code wouldn't work and left me in a confused sense of thought.

This book since reading it yesterday i've been able to jump back onto my Django / Python projects with a new found confidence, it now makes a lot more sense and has given me a real good fresher and understanding on the fundamentals. The author is brilliant and I really do look forward to purchasing more of these books as he makes it quite funny to learn python, and the coding examples are brilliant. The questions are also brilliant, explains these in a human readable context, very much in the way is wysiwyg.

Highly Recommend this book to any beginner, or any mid level developer who needs a refresh. I look forward to seeing more advanced books now from this author.
続きを読む
1人のお客様がこれが役に立ったと考えています
違反を報告
レビュー を日本語に翻訳する

D.Morgan
5つ星のうち5.0 Very good for beginner's.
2018年10月13日に英国でレビュー済み
Amazonで購入
As a newbe not only to Python but OOP in general this is by far the best book I have for actually learning the subject through actual programming and not just reading about it. It gently eases you in for the first 2 3rds but at the point of learning classes it seems to take off a bit so I've had to slow down at that point.

If you follow it as it intends it's not a quick book to zoom through but you will learn how to program in Python which is the entire point of the book. Take your time with it, there are no short cuts to learning this stuff but this book teaches it well.
続きを読む
3人のお客様がこれが役に立ったと考えています
違反を報告
レビュー を日本語に翻訳する
すべてのレビューを参照します
click to open popover
Amazonプライム会員ならお急ぎ便、日時指定便が使い放題
さらに、映画もTV番組も見放題。200万曲が聴き放題 。クラウドに好きなだけ写真も保存可能。
> プライムを無料で試す