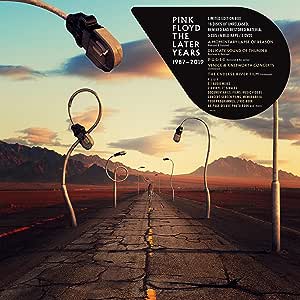 Bart
5つ星のうち5.0 Superb collection of unreleased material
2020年1月13日に英国でレビュー済み
Amazonで購入
If you have the stuff written by PF during the mid eighties through to the 90s and the live albums that have been released , but can't afford the ridiculous price for the whole box set then this is the answer. The curation of live cuts , outtakes and such like is superb. Buy on vinyl if you have a deck , it sounds awesome and for topping it has a superb rendition of Comfortably Numb. All you need. Until they release the whole box set in bite size chunks like they did with the Early Years. In which case I want the Knebworth gig. Bring on the Middle Years.
続きを読む
2人のお客様がこれが役に立ったと考えています
役に立った
フィードバックを送信中...
フィードバックをお寄せいただきありがとうございます。
申し訳ありませんが、お客様の投票の記録に失敗しました。もう一度試してください。
違反を報告
レビュー を日本語に翻訳する

Hal9001
5つ星のうち4.0 Did I have a "Momentary Lapse of Reason" plopping down the cash for this huge set?
2019年12月21日にカナダでレビュー済み
形式: CDAmazonで購入
This box set is either something you’re going to be into or you won’t be, it features music created in the post-Roger Waters era of the band and covers 1987-2019. The gems of this set include a new remix and redone version of A Momentary Lapse of Reason in both Stereo and 5.1 surround. A new remix and editing of the Delicate Sound of Thunder concert film, also in Stereo and 5.1 surround. And a re-edit of PULSE on BluRay for the first time. For those who missed the Division Bell 5.1 surround mix, that’s also included. Of course this is a comprehensive box set from this era so it offers a bunch of other stuff as well.

Overall the packaging is very well done, when you first open the massive clam-shell box you’re presented with a stack of tour book reproductions, 2 from the Momentary Lapse era, a newly made lyric book and the Division Bell programme. These are all bound in a fairly awkward paper band which can tear easily, so be careful with that! Under that is the hard cover picture book which feature tour, design and stage images… it’s a well put together document of the time with plenty to look through while listening to the material.

Next up, under that book, we have a LP sized cardboard envelope with a bunch of PF logos and stuff printed all over the front of it. Inside you find a bunch of very accurate concert ticket and backstage pass reproductions, a few posters from various gigs and tours, some stickers, and the two vinyl singles. The singles are Lost for Words rehearsal and Arnold Layne live from the Syd Barrett Tribute show. Both singles are one sided and feature etchings on the b-side. These singles come in two etching variants, of which one is randomly included in the box. Lost for Words will include either the Division Bell heads or the handshake seen on the sleeve. The Arnold Layne etching will be either the silhouette on the back cover of the Piper at the Gates of Dawn, or a bowler hat also seen on the sleeve and featured in the 1967 video for Arnold Layne.

Below this we find the media content contained in a thick rubber foam panel. The CD’s are housed in a tall thin book with AMLOR and DSOT in the front of the book and the outtakes and bonus audio content in the back area of the book. The book itself is filled with credits and recording info for the CD’s. Beside this booklet and also sunk into the foam are one stack of BluRay's and one stack of DVD's, each is held in a cardboard gatefold sleeve with it's own artwork and info. Each BluRay and DVD has it’s own nylon slip sleeve to avoid scratches.

Some issues include, upon opening the box there are 3 cardboard bars which surround the tour books, you have to remove these 3 things before digging in deeper… kind of weird and a bit awkward. It’s also odd that PULSE isn’t included on CD in remastered form… there are also other recording from this era which are missing, such as Terminal Frost (do your own lead version) and a few other odds and ends, not to mention a few strange edit choices from this era (Guy Pratt's bass solo on ABITW2 is buried under the DSOT mix now)... and while that's not a big deal, it's worth mentioning.

The biggest issue on this set for me is the price. I’m lucky enough to be able to afford it, but putting down $500 on what many consider the least interesting Pink Floyd era seems like it could be a bit of a stretch for some. This set should have been priced closer to the $250 mark. Doubling up content on both DVD and BluRay, likely to help justify the price, is kind of unfair to the customer in my opinion.

Overall, as mentioned earlier, the Delicate Sound of Thunder re-edit/re-mix is the standout of the set. It looks and sounds stunning, perhaps one of the best 5.1 live shows I have ever seen/heard. Next up I’d say the new Momentary Lapse 2019 re-edit is also quite good, it’s changes are subtle in places and more obvious in others, but a very nice update to the fairly over-produced original album. The 1989 Venice and 1990 Knebworth concerts are also both great shows and it's interesting to watch the live band develop over that 1987-1990 period, then finally into 1994.

In the end I’d say this set is a nice addition to your PF collection if you enjoy the era, for me I saw the shows in 1987 and 1988, as well as the 1994 shows… so this is all about memories more than anything else. I’m also a big fan of the band, and while this is maybe my least favourite era, I still appreciate the material that came out at this time. I’d say if you have expendable cash and you’re a fan, go for it (you prob already have)… but if you’re on the fence, perhaps grab the digital high res audio versions via the various streaming services out there for around the 30 dollar mark… you won’t get the video content, but the audio is very cool on it’s own! Removing a star for the price and a few missing audio/video bits and bobs from this era, otherwise it's a pretty beautiful box set!
続きを読む

Todd H
5つ星のうち1.0 Sound Quality leaves everything to be desired!
2019年12月14日にカナダでレビュー済み
Amazonで購入
The vinyl sounds like the worst recording I have in over 2500 lps. The horns on "Us and Them" do not sound like horns. The whole thing is trash as far as Sound Quality. I did play some reference albums immediately afterwards to make sure my High End stereo is in tune and it is.
続きを読む
3人のお客様がこれが役に立ったと考えています
役に立った
フィードバックを送信中...
フィードバックをお寄せいただきありがとうございます。
申し訳ありませんが、お客様の投票の記録に失敗しました。もう一度試してください。
違反を報告
レビュー を日本語に翻訳する

Gis A. Bun
5つ星のうち3.0 Meh choices
2019年12月2日にカナダでレビュー済み
形式: CDAmazonで購入
Considering that the box set goes for somewhere around $450+ this is the only other release [other than the vinyl]. I was hoping that they would of chosen some alternate mixes or something and not original mixes or a 2019 remix.
続きを読む
2人のお客様がこれが役に立ったと考えています
役に立った
フィードバックを送信中...
フィードバックをお寄せいただきありがとうございます。
申し訳ありませんが、お客様の投票の記録に失敗しました。もう一度試してください。
違反を報告
レビュー を日本語に翻訳する

Amazon Customer
5つ星のうち4.0 Good, but could be better
2020年1月7日にカナダでレビュー済み
形式: CDAmazonで購入
The material included is excellent, but at that price it could have included more material, like some rare stuff like the songs from the Carrera Americana soundtrack, the Big Spliff. It included a remix of A Momentary Lapse of Reason, but not the other studio albums from that era. Though I love the expanded Delicate Sound of Thunder album, it should have included at least a remaster of Pulse (it does include the video, but not the album).

After The Early Years box from 2016 which contained so much material, I would have expected more stuff in the new boxset.