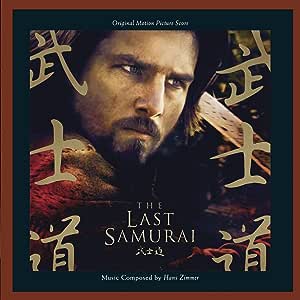 Whether Tom Cruise's portrayal of a 19th century American soldier cum samurai warrior will be remembered with the same pangs of pop-cultural bemusement that befell John Wayne playing Genghis Khan remains to be seen. But its musical soundtrack does mark an auspicious occasion: pop musician-turned-composer Hans Zimmer's 100th score since beginning his film career in 1988. A pioneer of fusing both the electronic and orchestral and the Westernized with the indigenous, Zimmer does both here with skill, drawing heavily on samples of the traditional Taiko (a massive Japanese drum) for its rhythmic action sequences, while constructing a melodic Western motif for Cruise's character that's both centerpiece and counterpoint for the score's transcultural intent. Aside from the brief, ominous thunder of the expected action/suspense boilerplate, Zimmer has constructed passages of gentle, Asian-inflected pastoralism that have parallels with much of his evocative work on The Thin Red Line. Those cues are the score's very soul, a canvas against which his more traditional themes reverberate all the stronger. --Jerry McCulley

Jason Bennett
5つ星のうち5.0 Stunning Film Score
2016年2月29日に英国でレビュー済み
Amazonで購入
With the film being one of my all time favourites, I am no stranger to the soundtrack and find it every bit as emotional as the film. Indeed you cannot seperate the imagery from the music. Since I bought this soundtrack I have not stopped playing it and have realised even more how breathtaking it is. With the film's story carrying themes of ignorance, bigotry, duty and the triumph of honour, these are also profoundly present in the music.

The first piece "A Way Of Life" introduces us to the sweeping emotional journey that is to be made. "Red Warrior" is the rousing action clarion but for me the best piece is "The Way Of The Sword" which is also in my opinion the most defining moment of the film.

Peter Svoren
5つ星のうち5.0 hiA hidden diamant
2018年7月30日に英国でレビュー済み
Amazonで購入
There is no doubt that is my biggest surprise in this year. Zimmer is a magician. Gentle, strong, agressive, sugesstive OST. I love it. Accoustic is very very good. And... What I dynamic. Unbelievable.
Warning. If you like a loud listening (like me) and you have a good hi-fi equipments than to be careful. I scared sometimes.
続きを読む
1人のお客様がこれが役に立ったと考えています
役に立った
フィードバックを送信中...
フィードバックをお寄せいただきありがとうございます。
申し訳ありませんが、お客様の投票の記録に失敗しました。もう一度試してください。
違反を報告
レビュー を日本語に翻訳する

Mrs. Chadwick
5つ星のうち5.0 Brilliant as always :-)
2015年1月2日に英国でレビュー済み
Amazonで購入
I loved the film, (and have it on DVD) and I thought the soundtrack to the film was brilliant, so I bought the CD of the soundtrack to add to my collection. :-)

Mark
5つ星のうち5.0 Really love this ++++
2012年9月14日に英国でレビュー済み
Amazonで購入
Big fan of many film scores and this is up there with the best. Very cool combination of Easternern with western symphony. Multiple listens already after one week. Highly recommended.