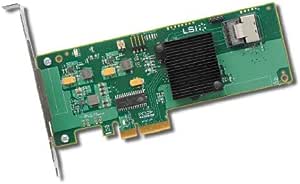 One quirk for anyone considering this card: RAID 1 is striped. There's no reason to stripe RAID 1, I like plain RAID 1 since then you can move a disk to another host and access your data without a RAID card. But for some reason all LSI cards I've encountered write RAID 1 in stripes. Meh, I can live with this.

Another quirk: Ctrl-C to get into the MegaRAID BIOS doesn't work. If you google it, you'll see what I mean. There's some problem with not enough memory available to run the MegaRAID bios. I came across a forum post where some gamer had done a lot of testing of this card using SSD's and he recommended simply using the OS utility, MegaRAID Storage Manager (MSM). So I use that, and it's fine for managing this card. Hint: ensure the LSI drivers (not Microsoft's) are installed for this card, otherwise MSM doesn't work so well.

Hint: updating the firmware is easy, just don't read the manual. There are many articles on this, and some people have lost hours trying to update the firmware. It worked for me the first time. I even updated it in Windows :). Simply use the flash utility for Windows, disconnect any drives connected to the card, and update the IR firmware and BIOS both in one step.

Update: I felt I had to update this review with some more findings. I created two RAID 1 volumes. I created backups of these volumes. Then I replaced two disks (of the same volume) with larger disks. My intention was to create a new, larger RAID 1 volume. Unfortunately, I couldn't do it directly. I couldn't get in to the RAID BIOS, so I had to use MSM. And MSM refused to allow me to create another volume. The card still held the replaced RAID 1 volume, and MSM showed that the card had two Disk Groups, when in fact there was only one (disk pair) attached to card. Hmmm, weird. And I couldn't delete the "missing" Disk Group.

I had to place one of the removed disks (from the old Disk Group) back into the chassis, use MSM to delete the Disk Group, then I could create a new Disk Group from my two new larger disks (and restore my data).

Does this mean if all disks of a Disk Group are lost, you can't remove its config from the card? Weird. Maybe the Linux MegaCLI has better options? Or, in such a case, you would have to back up any data, clear the card's config and re-create the config from scratch? Perhaps the option "Import foreign configuration" would be useful? Who knows. Bottom-line: backups are a necessity when using this card.

Bonus tip: use only Basic disks in Windows Disk Management. Do not use dynamic disks!

PinonPC
5つ星のうち1.0 Support and Drivers for Windows are non-existent
2019年1月16日にアメリカ合衆国でレビュー済み
Amazonで購入
If you try to find Windows server drivers for this card, it is next to impossible. Searching for LSI drivers points you to LSI, then to Broadcom then to Avago with no drivers available. All they have to offer are BSD drivers.
続きを読む
役に立った
フィードバックを送信中...
フィードバックをお寄せいただきありがとうございます。
申し訳ありませんが、お客様の投票の記録に失敗しました。もう一度試してください。
違反を報告
レビュー を日本語に翻訳する
その他の国際レビューを読み込む

DJohnson
5つ星のうち3.0 ok
2012年12月25日にアメリカ合衆国でレビュー済み
Amazonで購入
This product doesn't have the support that the LSI 9240 Megaraid card does. The Megaraid is the same brand, controls the same stuff and at about the same price but is much better supported. I would suggest checking this out before buying.
続きを読む
役に立った
フィードバックを送信中...
フィードバックをお寄せいただきありがとうございます。
申し訳ありませんが、お客様の投票の記録に失敗しました。もう一度試してください。
違反を報告
レビュー を日本語に翻訳する