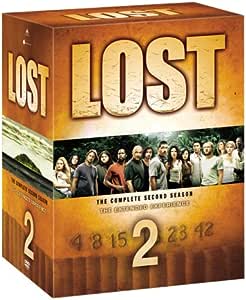 Throda tzen
5つ星のうち5.0 “What do you suppose all that's about?” [Claire Littleton: S2 Ep2]
2019年4月27日に英国でレビュー済み
Amazonで購入
This box set covers the second series of the 2004-2010 TV series in which some passengers are stranded on a magical Island after surviving a plane crash some 6-8 weeks earlier [depending on the timeline] and follows the story from the opening of the mysterious ‘hatch’
The first quarter is not as gripping as the first series and I felt like giving up as the story ‘arc’ becomes even more haphazard. Stick with it and after the half way this develops a stronger story arc and in places is more gripping than the first. The plane crash is redundant as everything now concentrates on the mysteries of the island itself and the more intrusive ’others’ whilst any realistic ‘survival’ portrayal soon ceases to exist.
The 24 episodes are held on 7 discs which are in individual slimline cases within a stiff card outer carton. The first six hold 4 episodes each and the seventh holds a host of extras. The discs open to a menu offering English and most European languages, then goes to main menu offering play all, set-up and some extras. Rated as a 12/15 these discs do contain some graphic injuries, sexual references and drug addiction.
There are seemingly abundant flaws and many ridiculous decisions as the central characters seem to fall back into their old habits but despite a weak first quarter pulls itself back from the edge and still remains worthwhile entertainment and remains a good piece of ***** entertainment in which some viewers may have figured out the islands purpose by the end.

Pop Culture Bandit
5つ星のうち5.0 "What's in the Hatch, Jack?"
2012年7月31日に英国でレビュー済み
Amazonで購入
This second season of Lost is when I got hooked on the show, as it focuses on the mystery of the island and introduces key elements to the series that would come into play heavily in the final few seasons. While the first season concentrated on the mystery of who the survivors were before the plane crash, this season turns its attention to the island itself, and the mysterious `Others' who seem to hidden within the jungle, waiting to strike out against our heroes from Oceanic 815.

The first episode continues straight on from the cliff-hanger finale of the previous Season - Jack, Locke and Kate head down into the bizarre hatch they found buried in the ground of the island, whilst Michael, Sawyer and Jin attempt to stay alive on the remains of their raft, blown up by the sinister group of Others who stole Michael's son, Walt. The first four episodes take place over the events of this chaotic night, and there is some play with the narrative structure, with overlapping stories which might annoy people as it feels like there is no real advancement at first.

The main threads for the season are Michael's hunt for his son, Walt, who remains captive, the discovery of a new group of survivors and whether Locke's faith in the island (specifically the contents of the hatch) is misplaced or not. As a whole, this season works really well although it did attract a lot of criticism at the time of broadcast for the change of pace from a character-driven show into a more science-fiction based drama. Some of the episodes are less vital than others and the flashback sequences begin to repeat character motifs that we already knew from the outset, such as Jack's `father issues'.

There are some answers to the mysteries that bugged viewers from the first season. We find out what happened to Claire during her abduction, during one of the more riveting flashbacks of the Season. We also learn what crime Kate committed to earn those handcuffs on the plane. Not all the mysteries about our Losties are answered, however, such as the cause of Locke's paralysis prior to the island.

I really enjoyed this season as I found the dynamic of the Losties vs. The Others to be more compelling this time around, with the introduction of more antagonists, and the slow drip-feeding of information. We also got introduced to some new cast members, as well as seeing some others get killed off, proving that the island is not a safe environment.

Key episodes include: The opening few episodes which introduce the state of play for the season and the new location for most of the action: The Swan Hatch. Another favourite is Episode 11 - `The Hunting Party', where a group of survivors are met by an opposing group of Others, and they have a tense conversation at gunpoint over just whose island this is, and what happens to those who become too curious. Episode 15 - "Maternity Leave", is an interesting glimpse into the events that happened during Claire's abduction and provides some answers. The lead-up to the finale is particularly satisfying, with a real action-movie feel, particularly the two-part finale, `Live Together, Die Alone' where all the key threads tie together, and leave us wondering what next.

The existing actors are all comfortable in their roles, and the additions to the ensemble are all pretty good, especially Adewale Akinnuoye-Agbaje imposing turn as the quiet, yet threatening `Mr. Eko' and Michael Emerson's `Henry Gale', who manages to teeter on the edge of innocence and sinister for the majority of the season, before revealing his true motives. Michelle Rodriguez plays her usual stock character of the butch tom-girl for the cop `Ana-Lucia', but does open up towards the end, showing a bit more depth to her character (and acting set!).

Overall, this is a great season and while it does have its lulls in the middle, it benefits from the box set treatment and not having to wait a whole week for a new episode. The themes of the Season seem to be about Faith, in particular highlighting the faith that Locke has, but Jack doesn't. Jack is the Man of Science, who refuses to believe in the fantastical elements of the island, whilst Locke is ready to accept the supernatural and believe. This season does a good job of weeding out the casual viewers by introducing certain elements to the storyline, which increase in complexity with each forthcoming season. If you find the sci-fi elements in this season to be off-putting, then it is unlikely you will enjoy the next four seasons as the focus moves further from the characters and deeper into these complex themes and ideas.

People could argue that in places season 2 literally lost its way and the writers struggled to define where they were heading. And granted at 24 episodes this is a very long season and it is very easy to see which are the mere filler episodes. Part of the reason Lost managed to step up another gear in seasons 4,5 and 6 was because they condensed the amount of episodes down. However I can overlook these minor issues and appreciate the season for what it is.

So whilst not perfect it more than amply sets the scene for things to come and leaves you wanting more.

After all Lost was one of those rare programs that come along every now and then which you just have to sit back and admire. Blu-Ray was made to showcase shows like this.
続きを読む
1人のお客様がこれが役に立ったと考えています
違反を報告
レビュー を日本語に翻訳する

None3
5つ星のうち5.0 Still going strong!
2011年5月15日に英国でレビュー済み
Amazonで購入
Well I was very happy with Lost Series 2! The viewer now gets to learn more in depth information about the characters and about the lives they were living before landing on the island, this involving a lot of startling moments. There are twists and turns galore for mystery lovers to fawn over! I almost wish I had kept a notebook from the start as it becomes easy to forget certain little parts, although part of the fun is when you are sitting watching and then go 'ahhhh yes!' I don't want to add any spoilers at all but will just mention that we also begin to learn more and more about the bizarre Dharma initiative and what they were doing on the island. I am still loving watching Lost and am very much looking forward to getting stuck into series 3 as I recall it being a real cracker!
続きを読む
4人のお客様がこれが役に立ったと考えています
違反を報告
レビュー を日本語に翻訳する