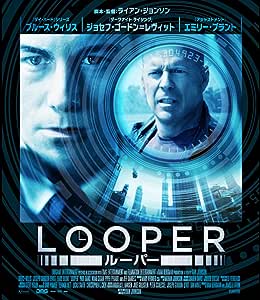 OJG
5つ星のうち4.0 A Nolan-esque sci-fi film brimming with ideas.
2019年10月9日に英国でレビュー済み
Amazonで購入
A full in-depth review of Looper will hopefully be available soon on my own film and TV review site (link in my Amazon profile!)

One of the more high-profile films of 2012 (especially more independent films), apart from the leading duo and the time travel aspect, I didn't know much about Looper before watching it. I was surprised by how much this reminded me of a Christopher Nolan film. With a cool colour palette, a main character dealing with the loss of his wife, time jumps, paradoxes etc., there's a fair bit of resemblance. There's a lot of interesting ideas at play in Looper, and it has a great couple of leads in Joseph Gordon-Levitt and Bruce Willis. The screenplay is so jammed with ideas in fact, that at times it can be a detriment. There are a few areas which feel undercooked as a result. I wasn't completely invested in Joe dealing with the death of his wife, simply because we only get one brief flashback of the two together. There's not enough of an established relationship around which to centre the character's primary motivation of revenge. It's telling that his wife is never even given a name and is credited as … Joe's Wife. This isn't to say I didn't enjoy Looper however. It's an ambitious, yet low-key sci-fi movie - it's enjoyable and definitely worth checking out.

Me
5つ星のうち4.0 John McClane!!????
2019年7月7日に英国でレビュー済み
Amazonで購入
An original premise but somewhat gruesome (and nonsense) aspects of how time travel works built in when bad guy abuse it. Watching the movie my reaction became "how long is left". I've started so I'll finish - but it wasn't one I would want to watch again. All that changed about 20 minutes from the end when (basically) John McClane made an appearance!!! Bruce Wills just goes nuts!! And wastes all the bad guys single handed. He just drifted around for most of the movie with no signs he would kick some serious behind. But the payoff was worth it. Every one of those bad guys got what they deserved. And the ending was pretty good. It would have got 2 stars. The satisfaction of a positive outcome bumped ot up. Worth a watch!
続きを読む
2人のお客様がこれが役に立ったと考えています
違反を報告
レビュー を日本語に翻訳する

Throda tzen
5つ星のうち5.0 “..I cleaned you up, and put a gun in your hand.” [Abe]
2016年1月28日に英国でレビュー済み
Amazonで購入
In this 2012 science fiction action thriller film, organised crime uses time travel to get rid of victims by sending the bound live person into the past. These are disposed of [in the ‘present’ timeline, 2044] by specialist ‘assassins’ known as loopers. But what happens when a Looper meets their future self?
Like it says in the film, time travel messes with your brain and this does have a few basic flaws, but providing you don’t go all nerdy over this, it does create a believable future world [albeit the usual gloomy view]. Without destroying the plot, there are some good ideas kicking around in this but you tend to start with one film then future self throws you down a totally differing timeline. Ten year old Cid [Pierce Gagnon] steals the screen with a range and intensity of acting skills that seem well above his age.
The single disc goes to 3 trailers, then to main menu featuring play, scene selection, bonus [looper: from the beginning, scoring looper, deleted scenes, animated trailer and set up [English 5.1/2.0, commentary, English hard of hearing, subtitles on/off] .
With some swearing, violence and inexplicit sex, the film starts strong, but the middle third unfortunately does too much soul searching and needs to catch its breath in way of explaining things, before exploding into the usual Bruce Willis mayhem. Rated as 15, this is a worthwhile ***** that throws some interesting concepts around.

rotay44
5つ星のうち5.0 Unique scifi
2020年10月14日に英国でレビュー済み
Amazonで購入
Great sci-fi film with a unique time loop twist. Biggest twist is at the end, which I won't reveal. Worth all of 5 stars.
続きを読む
違反を報告
レビュー を日本語に翻訳する

Webjunky
5つ星のうち4.0 Great Sci-Fi Movie
2016年9月27日に英国でレビュー済み
Amazonで購入
Love this film. I love it's depiction of the future and the first two acts are great. For me the kid ruins it and the third act is a bit weak. But the way it deals with time travel it wonderful. If you like Sci-fi this film is a must watch.
続きを読む
違反を報告
レビュー を日本語に翻訳する
すべてのレビューを参照します
Amazonプライム会員ならお急ぎ便、日時指定便が使い放題
さらに、映画もTV番組も見放題。200万曲が聴き放題 。クラウドに好きなだけ写真も保存可能。
> プライムを無料で試す