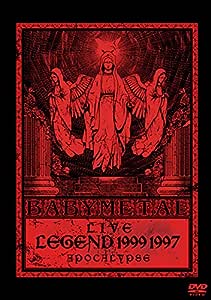 Kitsune Da O
5つ星のうち5.0 Babymetal's Birthday Bonanzas!
2014年11月15日に英国でレビュー済み
Amazonで購入
At the time of writing this, I am a week removed from Babymetal's most recent live show at the O2 Academy Brixton in London. A concert to which I was fortunate enough to possess a VIP ticket. I was at the front barrier for the entire show and I have to say that it will live long in my memory as being one of the greatest nights of my life. I'm pretty sure that a high percentage of the other 4,999 fans in attendance would say the same.
Having seen them live for myself, I watch recordings of their previous live shows with a somewhat judgmental eye. As such, I feel sufficiently qualified to give you a review of their latest DVD release, 'Babymetal - Live Legend 1999 & 1997 Apocalypse'.
For those of you who are unfamiliar with the band or would like to know a little about their origins and history, please see my review of their debut album. I'm sure the majority of you will already have it downloaded or permanently in your CD player already.
This double DVD set comprises two of Babymetal's shows from 2013.
'Legend 1999' was held on the 30/06/2013 at the NHK and is a 14th birthday celebratory concert in honour of Yui Mizuno (Yuimetal) - D.O.B. 20/06/1999 and Moa Kikuchi (Moametal) - D.O.B. 04/07/1999.
'Legend 1997' was held on the 21/12/2013 at the Makuhari Messe and is a 16th birthday celebratory concert in honour of Suzuka Nakamoto (Su-Metal) - D.O.B. 20/12/1997.
If you're familiar with the band's debut album, 'BABYMETAL', the majority of both set-lists will be instantly recognisable to you.
There are a few exceptions -
Their cover of Kiba of Akiba's 'Answer for Animation With You' is performed at both shows.
Two short songs - 'Love - Big Time Changes' and 'From Hell With Love' performed by Yuimetal and Moametal respectively during the 'Legend 1999' show.
An as yet unreleased Babymetal song called 'No Rain, No Rainbow' is performed by Su-Metal during the 'Legend 1999' show. Beautiful song, reminiscent of their album track 'Akatsuki'.
A special 'Night of 15 Mix' version of Head Bangya!! Is the opener for the 'Legend 1997' show.
A nice piano-driven version of 'Akatsuki' tentatively titled 'Unfinished Version' is performed by Su-Metal at the 'Legend 1997' show.
The rest of both the shows' set-lists are taken from the band's debut album.
'Gimme Choco!' is only performed on the '1997 Legend' show.
'4 no Uta' and 'Rondo of Nightmare' are absent from both sets.
If you've only ever heard Babymetal from your stereo or digital/cellular device, you are missing out on so much. Babymetal's live shows are incredible. The choreography, the stage production, the live singing (especially by Su-Metal), the passion of the crowd, the performance of Babymetal's 'Kami Band' and the thorough enjoyment that Su, Yui and Moa get from performing is evident from the beaming smiles on their faces.
If you haven't had the chance to see the band live in person, this DVD is definitely the next best thing.
It's so hard to believe that these three unassuming Japanese schoolgirl teenagers are so accomplished and professional in their performances.
Show after show, they seem to grow in confidence and improve themselves.
I don't want to spoil either show's highlights for you but I will just say that the ending of the 'Legend 1999' show as the girls walked off into the 'mist' whilst 'Ave Maria' played brought tears to my eyes. Beautiful.
Also the crucifixion ending of the 'Legend 1997' show just HAS to be seen. Gives you chills.
Until the release of the band's hotly-anticipated second album and the recently-announced release of their 'Red Night/Black Night' DVD of their legendary March 2014 Budokan shows (due for release in January), this will help pass the time and give those of you not familiar with their live shows, a true glimpse into just how magnificent Babymetal are and why their popularity has soared over the course of this past year.
Remember -
WE ARE BABYMETAL
WE ARE "THE ONE"

Nick
5つ星のうち5.0 Great service and excellent concerts
2019年7月10日に英国でレビュー済み
Amazonで購入
Disc arrived yesterday and was in perfect condition, so very please with Samurai Media's service.
Have only watched the first concert so far but it is great to see how good they were in their early days and how the quality of the concert coverage has improved. Well worth the money.
続きを読む
違反を報告
レビュー を日本語に翻訳する

JC
5つ星のうち5.0 BABYMETAL EARLY DAYS
2017年2月16日に英国でレビュー済み
Amazonで購入
I have become a HUGE BABYMETAL, these concerts from a few years ago are hugely enjoyable, item not cheap but worth it well for me it is. Great fun, makes me wish I was a few years younger and in better health so I could experience them live!!
続きを読む
違反を報告
レビュー を日本語に翻訳する