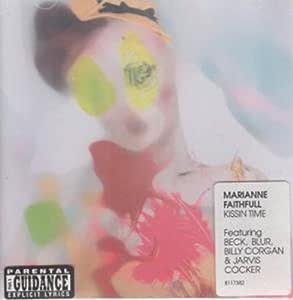 Marianne Faithfull is--after 38 years in music--still more famous for whom she had sex with in the 1960s than for her talents as singer and lyricist. Her 11th album, Kissin' Time, uses her wise and angry knowledge of this unjust state of affairs, and comes up smelling not of roses, but stale perfume, spilt gin and sex. The result is her best-ever album. Comprising collaborations with the likes of Beck, Blur, Pulp, The Smashing Pumpkins' Billy Corgan and The Eurythmics' Dave Stewart, Kissin' Time takes in everything from spiky electro-pop (Beck's superb "Sex with Strangers") to Tom Waits-lite (Blur's rather self-conscious title track), by way of "Song for Nico"'s no-punches-pulled ballad tribute to the late Velvet Underground chanteuse, and the magnificent "Sliding Through Life on Charm", where Pulp's rousing anthemics provide the perfect backdrop for Ms Faithfull's hilariously filthy autobiographical defiance. Faithfull's cracked cabaret growl and painfully personal lyrics remain an acquired taste. But, if you can deal with a middle-aged woman's sexual and emotional honesty, and the album's deliberately eclectic tunes and textures, then Kissin' Time is a classic of bold, bitter and elegantly profane pop art. --Garry Mulholland

First album in well over two years by the veteran rocker. Features collaborations & contributions, in varying forms that range from writing to producing to performing, from an illustrious & diverse line-up of Faithfull devotees that includes Beck, Damon Albarn of Blur, Jarvis Cocker of Pulp, Billy Corgan of Smashing Pumpkins & Etienne Daho. No U.S. release is scheduled. 2002.

michael fry
5つ星のうち5.0 A very positive experience
2019年10月9日に英国でレビュー済み
Amazonで購入
The product was in excellent condition, and I am extremely happy with it!
続きを読む
違反を報告
レビュー を日本語に翻訳する

spigomars
5つ星のうち3.0 Kissin Time simply put is about as lively as racing model T's...save your cash, and buy something else...
2016年2月3日にカナダでレビュー済み
Amazonで購入
Well if you take the disc apart and listen to it as if it were a number of singles then maybe there might be some saving grace to it. Trying to put a theme to this piece simply does not work, it is not worthy of that kind of deep thought. In fact this is hardly worth much thought at all. "Marianne, Marianne, where for art thou Marianne ? " Her typical talent simply seems to be missing, gone on an extended vacation as far as this disc is concerned. A sad thing really for I am an ardent fan of Marianne Faithful. A person would have to be in order to shell out hard cash on this disc and smile about it afterward. So why did I still give it 3 stars you may ask ? ...Well that is because even in its obvious failure there is light, some cuts of wisdom that save it from total failure. Pieces within the dross which save it from total embarrassment. In Faithful's case even a single cut in a field of slag is enough to afford the disc salvation, and I must admit that there is more than a single cut of note here. "sleeping with strangers", and a few others were in my opinion enough to keep this floating even though the majority of this CD simply fail to meet the pass line...Spigomars
続きを読む
違反を報告
レビュー を日本語に翻訳する