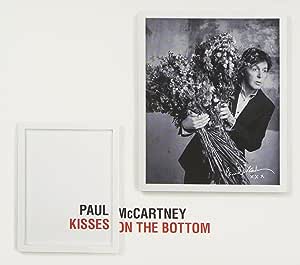 Kisses on the Bottom -Deluxe-


1.I'm Gonna Sit Right Down and Write Myself a Letter
2.Home (When Shadows Fall)
3.It's Only a Paper Moon
4.More I Cannot with You
5.The Glory of Love
6.We Three (My Echo, My Shadow and Me)
7.Ac-cent-tchu-ate the Positive
8.My Valentine
9.Always
10.My Very Good Friend the Milkman
11.Bye Bye Blackbird
12.Get Yourself Another Fool
13.The Inch Worms
14.Only Our Hearts
15.Baby's Request
16.My One and Only Love

Ian E.
5つ星のうち4.0 Good, but could have been better
2016年12月7日に英国でレビュー済み
Amazonで購入
In the main these are songs that Paul McCartney knew as a kid (and sang at family get-togethers) and has now finally got round to recording. If you can imagine tracks that could have been recorded for a fifties Nat King Cole record (most of the tracks were recorded at the studio used by Cole in Capitol Tower) but with vocals by a person of advanced years whose voice is a lot weaker than it used to be (but can still carry a tune), then your level of enjoyment will be determined by how you feel about this situation. It's a shame that Sir Paul didn't conceive and record this set while his voice was stronger, but there's still a lot to enjoy here.
続きを読む
2人のお客様がこれが役に立ったと考えています
違反を報告
レビュー を日本語に翻訳する

TSM
5つ星のうち4.0 Kiss his ass
2019年7月2日に英国でレビュー済み
Amazonで購入
McCartney, like a lot of elderly pop singers has raided the great American songbook for a series of tunes which have special meaning for the old Liverpudlian. Surprisingly this is a very nice selection which he sings quite beautifully. Who'd have thunk it? Not me, I didn't think his voice or demeanour would be up to it. I usually buy any old crap from Macca in the hope that there is gold in them thar hills. Usually I am not disappointed. Another strike for the ex-Beatle. If I ever see him I'll be sure to pucker up!
続きを読む
違反を報告
レビュー を日本語に翻訳する

Stephen Reid
5つ星のうち4.0 Evidence of McCartney's versatility: easy listening done very well.
2012年2月13日に英国でレビュー済み
Amazonで購入
This is a very good album and I recommend it. There is always a danger, especially in the age of CDs which are so much longer than LPs used to be, of churning out song after song that is more of the same. McCartney has avoided that trap, showing great versatility over the years by supplementing his rock / pop output with offers like the Fireman and his classical forays. Now we have an album of 'oldies' and it is well done.

So ... how to position this album? It's a collaboration, which is when McCartney is at his strongest. Here we have the brilliant Diana Krall with the world's most successful rocker as vocalist. Krall and her fellow musicians are superb.

The songs are, in the main, familiar standards with a couple of rarities thrown in. They are sensitively, almost lovingly, arranged and beautifully played. They are mainly slow or medium tempo, which means that McCartney's singing skills are very much to the fore. A few wobbles, but hey - this guy can hold a tune, even at 70. McCartney's voice is instantly recognisable, of course. It may not be the most powerful voice for singing standards like these, but it's good and it's familiar and he's taking the project very seriously.

Of the McCartney originals, I predict that 'My Valentine' is going to become a standard, covered by many. It fits perfectly into this record and, with Eric Clapton's guitar, is up there with the best that McCartney has written. I hope it makes it into his live concerts where it would earn a warm welcome from the audience. 'Only our Hearts' is pleasant but less memorable. On the digipack, 'Baby's Request' is slower and better arranged than on 'Back to the Egg'. I prefer this version.

To see how seriously McCartney was taking this project, it's worth watching the video of the sessions. It is brilliant to see such class musicians making good music live in the studio.

It doesn't do to compare this album to McCartney's other offers: it's completely different and comparison is therefore inappropriate. So, does it work as a free-standing project? Yes it does, very well. Four stars.
続きを読む
1人のお客様がこれが役に立ったと考えています
違反を報告
レビュー を日本語に翻訳する

S. J. Blackwood
5つ星のうち4.0 To those who say Paul has lost his voice - this proves otherwise
2012年3月20日に英国でレビュー済み
Amazonで購入
If truth be told, I would chose a new album of new McCartney origional rock/pop songs.However, I also like this style of music, and own many LPs of origional artists from this era.That said,Paul delivers an album of really top quality performances.

His voice may not be the same as it was when he was 25 - what person in their 70th year could claim such a thing ! However, he is still a very fine vocalist as this album demonstrates.No sign of straining of the vocal chords as another reviewer has suggested...

This album feels warm and real - not smaltzy and overproduced.

Despite reports, Paul does actually play some acoustic guitar on the album, BUT his instrumental contribution IS small.This does make it feel a little bit as if he is a guest on his own album, as I'm just used to seeing him playing multiple instruments on recordings.I do like it when there is more of an instrumental stamp by Macca on his recordings, but thats a small gripe.

Like most of the stuff he does,Macca makes a really good job of this.
続きを読む
違反を報告
レビュー を日本語に翻訳する

D. V. Lawson
5つ星のうち5.0 An album of old "photos"
2013年9月1日に英国でレビュー済み
Amazonで購入
A recent visit to Liverpool which included the un-missable National Trust tour of John and Paul's homes has had me looking through and listening to a lot of Beatle music but it was the chance viewing of some of the video of this album on TV that reminded me that I had bought it and not really played it. I now realise that this was a glaring oversight. Of course it is a sentimental journey through songs that Paul would have heard in his childhood probably played and sung by his Dad on their upright piano but I certainly have room in my life for that along with much more contemporary music being of a similar age to Paul. Unlike Rod Stewart who seemed to decide to make a new career as a crooner Paul was just opening an old album of "photos". It is lovely and highly recommended.
続きを読む
違反を報告
レビュー を日本語に翻訳する
すべてのレビューを参照します
Amazonプライム会員ならお急ぎ便、日時指定便が使い放題
さらに、映画もTV番組も見放題。200万曲が聴き放題 。クラウドに好きなだけ写真も保存可能。
> プライムを無料で試す