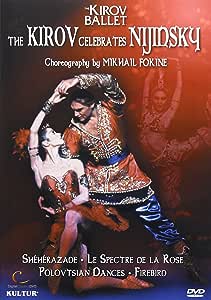 H. Dobree
5つ星のうち3.0 Fokine,s choreography and his grandaughter,s
2010年11月8日に英国でレビュー済み
Amazonで購入
The best item on this DVD is the first one.
The Specter de la Rose male dancer is a million miles away from what was Nijinsky,s .See Sokolova,s book "Dancing for Diaghilev" This dancer is far too thin and lacks the abilty to perform the batterie steps needed in this role.
The Firebird version in both it,s decor and costume is nothing like the perfomances seen at Covent Garden or by The Royal Birmingham Ballet.As for the steps of the dance.Fokine,s grandaughter,s interferance is a negative contribution.As is the case for The Prince Igor ballet.
As an ex dancer I can truly compare performances.In recent years I have seen The Kirov at Covent Garden. Their performance of another Fokine classic namely "Petrouska" not on this DVD was also a dissapoitment.
続きを読む
1人のお客様がこれが役に立ったと考えています
違反を報告
レビュー を日本語に翻訳する

Dr. A. Karin Wettig
5つ星のうち5.0 wonderful collection of dances honouring one of the most ingenious dancers of the world - Vaslav Nijinsky
2015年4月15日にドイツでレビュー済み
Amazonで購入
The style and decoration and costumes are made in memory of Vaslav Nijinsky. It is a great pleasure to watch these traditional ballets and to see how emotional dancers can express themselves with the whole body and how touching the stories are. I love this DVD and can watch it many times.
続きを読む
違反を報告
レビュー を日本語に翻訳する

MusicMad
5つ星のうち4.0 A feast for the eyes
2005年9月25日にアメリカ合衆国でレビュー済み
Amazonで購入
The four ballets presented by the Kirov are all based on the original designs for Diaghilev's Ballet Russes, and the jewel-like colors leap off the screen. (The costumes for Sheherezade and The Firebird especially seem to be inspired by the jeweled eggs of Faberge.) The dancing is indeed technically accomplished -- perhaps too much so, since the bodies that Michael Fokine had to work with were probably not quite this flexible (just a theory). I've read the posted reviews on this site, and they had valuable things to say: I find myself wavering somewhere in between.

Scheherezade seems to be the least choreographically accomplished, taking a while before the dancing really kicks in, and when it does, the moves seem quite repetitive at times, especially in the long central pas de deux. (Sometimes it seems like there are long stretches of filler material.) Still, I've only read about it up to now, so it was good to see it.

Le Spectre de la Rose is a mood piece more than anythng else, and the performance here is quite good. So what if Zhanna Ayupova forgets to close her eyes: other famous theatrical sleepwalkers keep their eyes open as well, notably Shakespeare's Scottish Lady in the play and in Verdi's opera. Otherwise, how would she know where she was going? (And don't forget Balanchine's sleepwalker in La Sonnambula.) This sleepwalker gets the romantic mood right, and that's what matters. Igor Kolb as The Spectre is appropriately androgynous, and although I found his leaps graceful, they didn't seem quite effortless.

I saw a production of Prince Igor in New York some years ago, and the ballet was the best part. The choreography then was by Balanchine; the Fokine original presented here is very exciting and captures the exotic and barbaric energy of the score perfectly. Too bad the sopranos in the chorus were too far away from the microphones -- they get most of the tunes; and because the altos are right on top of the amplification, they do not sound beautiful.

I bought this DVD for The Firebird: I think it's the only really traditional one available (?). Visually, it is stunning to see.

I did find Diana Vishneva's performance more concerned with choreography than drama: her attempts at escape from Prince Ivan just seemed to be an ordinary set of lifts. As Ivan, Andrei Yakovlev doesn't get much to do besides partnering and postering, but he does it well and presents a real character. I don't recall Kotschei being quite so reptilian: Vladimir Ponomarev's performance - and his costume - is delightfully hideous.

The Mariinski Theater orchestra under Mikhail Agrest performs the various scores well, but they fall asleep for a moment in the apotheosis section of The Firebird. All in all, this is a very entertaining DVD, and deserves repeated viewings.
続きを読む
43人のお客様がこれが役に立ったと考えています
違反を報告
レビュー を日本語に翻訳する

Amazon Customer
5つ星のうち5.0 The Joy of Dancing
2005年9月22日にアメリカ合衆国でレビュー済み
Amazonで購入
The Kirov dancers not only have formidable technique, they know how to use it. The dancers are all beautiful but sincere and dance honestly. Especially notable is their joy of folk dancing in this DVD. It captures the true spirit of dance, which is joy. I can watch this over and over and never tire of the beautiful dancing of the Russians. To me, the two jewels of this recording are the Firebird and Spectre de la Rose. I imagine what Nijinsky must have looked like as the spirit of the rose. The Russian man has amazing flexibility, which is only seen in male dances who start training young enough to develop it. The choreography of this is brilliant, as is the choreography in the Firebird. The firebird is a true animal spirit, which Nijinsky has captured in his ballet. A very entertaining DVD.
続きを読む
24人のお客様がこれが役に立ったと考えています
違反を報告
レビュー を日本語に翻訳する
すべてのレビューを参照します
同様の商品をご覧になりませんか？ こちらのリンクで参照ください。バレエ 雑貨
Amazonプライム会員ならお急ぎ便、日時指定便が使い放題
さらに、映画もTV番組も見放題。200万曲が聴き放題 。クラウドに好きなだけ写真も保存可能。
> プライムを無料で試す