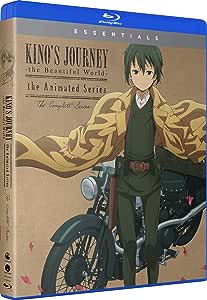 Anime Fanatic
5つ星のうち4.0 A worthy succesor.
2019年2月26日 - (Amazon.com)
形式: Blu-rayAmazonで購入
I found this to be a very worthy follow-up to the original series. Again we find our protagonist Kino and his Motorad (talking motorcycle) visiting various countries each with something unique and unusual about it. Almost always something wrong. The stories were interesting and entertaining. I recommend this series to any fans of the original.
続きを読む
レビュー を日本語に翻訳する

B. Ackley
5つ星のうち3.0 Competent series but not as good as the Original
2019年1月22日 - (Amazon.com)
形式: Blu-ray
When the announcement that the quiet Kino’s Journey series would receive a second season/reboot many anime fans were pleasantly surprised. Kino’s Journey was one of those subtle under the radar anime series about a traveler named Kino and her talking bike Hermes. The series followed Kino’s adventures as she visited countries in a strange landscape. Some of the tales were allegorical, some just straight entertainment but all were thought provoking. Those looking for a cerebral anime were probably excited about the second season.

This new season, given the subtitle “the beautiful world” has a lot of changes from the original series. The original series was had a deliberately muted design using CRT scan lines to mimic a tube TV image, retro character designs, muted color palette, and a moody score. This new incarnation is brighter, with more typical anime character designs. Instead of slow and sometimes orchestral sounds the music is now heavily electronic. The stories are still adapted from the original manga so the material stays true however in some cases the series repeats/retells stories from the first season.

While these aesthetic changes are noticeable the biggest change is the actual tone and and characterization. In the original series Kino is depicted as a naturally curious and passive adventurer who embraces the joys and the dangers that traveling between the different countries offer. The tone is more reflective and quiet. In the new series however Kino is more aggressive and loud, happily killing when desired and being an active participant in the countries visited. For me this depiction was less likeable and betrayed the original spirit of the series.

The episodes in this 2nd season are a mixed bag. The excellent episode “a land where people can kill people” is a thought provoking, thinly veiled commentary on America, right down to the olde west style culture. There are some dud episodes such as the episode about a moving country, a large construct that trespasses through other countries wrecking havoc. The worst episode is the poor retelling of the Colosseum story featured in the first series. Originally a intriguing 2 part revenge tale, presented here it is a limp, rushed episode lacking any punch.

Overall this season of Kino is an okay collection of tales. It is neither as powerful or intelligent as the first season. I personally prefer the look of the first season also although others may disagree. At the current pricepoint of $40-$60 I couldn’t recommend. Still worth a look if you have it available on another service.

Bransbow
5つ星のうち5.0 I may be biased
2019年9月29日 - (Amazon.com)
形式: Blu-ray
Contrary to most people, I actually highly prefer this series to the original anime adaptation (I think the reason for this is because it more faithfully adapts the original stories without adding extra details). This is probably not only one of my favorite anime, but one of my favorite pieces of media to date. It was my first introduction to the Kino’s Journey franchise, so I may be a bit biased, but I have since bought and loved the original anime; officially released novel volume; and the officially released manga adaptation, as well as reading fan translations of the unreleased novels (which I like better than both anime series).

Like I said, there may be unintended bias here, but if you’ve never heard of this series before, I highly recommend it! Though, maybe start with the manga as it’s cheaper than the novel, and is a better starting point than either anime, imo.
続きを読む
レビュー を日本語に翻訳する
Amazon.comのカスタマーレビューを見る(5) 5つ星のうち4.3
Amazonプライム会員ならお急ぎ便、日時指定便が使い放題
さらに、映画もTV番組も見放題。200万曲が聴き放題 。クラウドに好きなだけ写真も保存可能。
> プライムを無料で試す