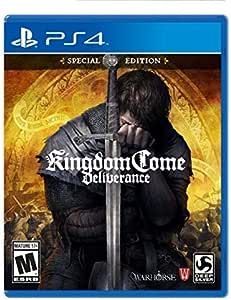 Idontwantapublicname
5つ星のうち5.0 Some minor issues that can honestly be overlooked; great game
2018年2月20日にアメリカ合衆国でレビュー済み
Amazonで購入
Although it's not without it's flaws, like some graphical issues and the lock picking (it's seriously easier to pick locks in real life than it is in this game), this is still a great game. There's no magic, no dragons, you're aren't chosen by the Outsider, you're not the Dragonborn, and at the beginning, literally everyone is better than you at pretty much everything. You are not special; you're the survivor of a historically accurate attack on a small village (Skalitz), and now you're trying to make your way in the world. It's really a lot of fun, but also incredibly time consuming. To save the game, you either need to drink a Savior Schnapps, sleep, or make progress in certain quests. A lot of people on here have been whining about this, but this is actually a good thing. The save mechanism in this game forces you to either live with your immoral choices, or reevaluate them before you even make them. While on a quest to retrieve some items for an Old Whore (I'm not being facetious, that was her name), I had to steal a dagger from her ex husband. While retrieving it I got caught by him, so I knocked him unconscious and put him in his pantry. Then his new wife saw me, so she went in the pantry too. On my way out, one of his neighbors saw me, so I ended up leaving the house with three unconscious people in the pantry, and I seriously had a moment of "I guess this is the kind of person I am"

Brent K
5つ星のうち1.0 Not worth it.
2018年4月11日にアメリカ合衆国でレビュー済み
Amazonで購入
Game itself is good, but my PS4 version is really screwed up. Buggy. Lots of wasted time. I have played for many hours and am quitting because it screws up constantly. I do not recommend.

Update - decided to give it one more chance and it crashed yet again. Really, really annoying. There have been games I have bought and played for under an hour and decided I didn't like. Just personal preference, no regrets. This game I DID like, but honestly wish I never bought it. This is the most frustrating game by far I have ever owned. Might be a PS4 thing but I am beyond frustrated with this thing.
続きを読む
10人のお客様がこれが役に立ったと考えています
違反を報告
レビュー を日本語に翻訳する

SLB
5つ星のうち5.0 A really fun non-fantasy RPG
2018年3月8日にアメリカ合衆国でレビュー済み
Amazonで購入
No game is perfect and this one has its share of bugs which are being addressed And patches coming shortly. People who have only played it a few hours or just a couple of days need to realize that the clunkiness they’re talking about goes away as you get better at everything you do including archery sword fighting horse riding etc. I myself in the game use exclusively bow and arrow and am pretty adept with it now. This game is a lot of fun and again remember you skill up in most things you do and another thing is that everything you do usually has a consequence so if you do anything that’s let’s say a tad off color, make sure there’s no guards are witnesses around!
続きを読む
11人のお客様がこれが役に立ったと考えています
違反を報告
レビュー を日本語に翻訳する

athena graeme
5つ星のうち1.0 Junk
2018年12月25日にアメリカ合衆国でレビュー済み
Amazonで購入
I bought this as a Christmas gift early (we're serving overseas and gifts can take months to reach us). When he opened it this morning, it took almost an hour to load before crashing and failing. The disc is garbage, there's a divot in it that prevents it from playing. So I paid a lot of money for junk we can't even get to load. Thanks and Merry Christmas. :( Now he's sulking because he didn't get anything and we're all in a bad mood because of it. You ruined Christmas, seriously. Please check your stuff before you sell it.
続きを読む
1人のお客様がこれが役に立ったと考えています
違反を報告
レビュー を日本語に翻訳する
すべてのレビューを参照します
Amazonプライム会員ならお急ぎ便、日時指定便が使い放題
さらに、映画もTV番組も見放題。200万曲が聴き放題 。クラウドに好きなだけ写真も保存可能。
> プライムを無料で試す