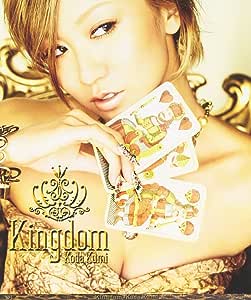 Vera Claythorne
5つ星のうち5.0 Koda Kumi- Kingdom
2013年5月9日にアメリカ合衆国でレビュー済み
Amazonで購入
As of right now, I'm very confused. I don't know whether her name is Koda Kumi or Kumi Koda. Throughout the album artwork it's written both ways. And, speaking of the album artwork. It's pretty stellar. Amazing actually, I couldn't believe how vogue it was. A lot of effort was put into the style and look Koda wanted for her album and it was portrayed through every picture she took. It was all so sensual, without being slutty (A reputation, I've learned Koda has). If these pictures prove anything, Koda Kumi is one of the most beautiful J-Pop stars (Sorry Ayumi).

Now, the reason I picked this album over the other two options was simply because I liked the picture the best. I wasn't aware that it was the deluxe CD + 2DVD addition. There's a music video for every song- and I mean every song. There's even a concert DVD, which wasn't really my thing, but was something someone who was into that would probably really enjoy. As for the music videos you can make your own decision once you see them. My favorite's are the one's for But and Last Angel. I have no idea what's going on in Freaky and don't even get me started on Wonderland. Why are there dancing mushrooms?

When it comes to the music, it's not all perfect. What it is though is different. Koda isn't repeating the same formula she's actually attempting to create a different sound on every song, some of it works and some of it doesn't. If you buy it you can make your own decision, but my own personal favorites (And one's I would recommend looking up before you buy the album) are But, Last Angel, Sweet Trap, Black Cherry, and Secret. Freaky was a number one hit for Koda, I however find it to be a little- disturbing. I might not know what she's saying but there's definitely a dark sexual vibe behind it that's not exactly comfortable. If you need a lightened version of it my personal favorite is the Caramel Pod Remix, which turns it into the fun charismatic song it's supposed to be. It appears on one of her Driving Hits albums if you like it.

It should be noted that the song Black Cherry is only available on this edition.

So, yes Kingdom has it flaws (Every album does). What it delivers is good, though. It's not a blur of BoA's The Face album, it sticks with you. If you've never bought a Koda Kumi album this is certainly not a bad place to start.