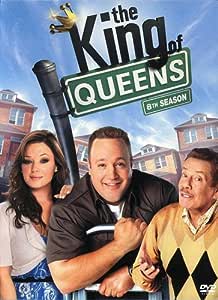 Doug Heffernan (Emmyｮ-nominated Kevin James) and his wife Carrie (Leah Remini) keep the laughs coming when they both try pole dancing, but with different results. Doug痴 sudden interest in personal grooming causes Carrie to investigate. Arthur (Jerry Stiller) brings home a set of sheets from a motel, along with thousands of bed bugs. Doug and Carrie find that a quaint bed and breakfast might be a little too rustic. Plus tons more laughs and great guest stars, including Kirstie Alley, Ray Romano and Huey Lewis.

Beyond The King of Queens - The Complete Eighth Season at Amazon.com

L. Morgan
5つ星のうち5.0 The King Of Comedy!
2015年6月11日に英国でレビュー済み
Amazonで購入
This series is one of the funniest sit-coms to come from America in my opinion. I fell under the spell of The King of Queens while visiting Ireland some years ago, and discoverd it being aired on Irish TV. It was being shown on British TV until just a few months ago, but then my enjoyment suddenly stopped when Channel 4 withdrew it from the early morning schedule for seemingly no apparent reason. I loved it so much that I was determined to buy the series on DVD. It is very witty and supremely entertaining with great scripts. The characters are very well acted and extremely loveable. The story lines are really absorbing and the witty and hilarious comedy situations make me laugh out loud.....which takes a lot believe me! The whole series makes for great entertainment and the early Seasons are just as good as the later ones, if often a little risque! But never in dubious taste. Season 8 does not disappoint and added to the rest of the series it makes for an excellent investment in unmissable comedy. Love it! I will be sorry when I have watched it all. But I will watch it again and again in future years when I am in need of a good laugh.
続きを読む
違反を報告
レビュー を日本語に翻訳する

Lola
5つ星のうち5.0 King of Queens DVD.
2015年5月20日に英国でレビュー済み
Amazonで購入
I bought this dvd not realising that it was the wrong region code, it is region 1 which is usa, meaning that it will not play on standard European player. However rather than return back to the seller I decided to purchase a multi region DVD player from Amazon which I found to be very reasonably priced so in the future won,t need to worry about different region codes. By the way King of Queens is one of my all time favorite shows.
続きを読む
違反を報告
レビュー を日本語に翻訳する

edel
5つ星のうち5.0 King Of Queens
2011年8月23日に英国でレビュー済み
Amazonで購入
I really love this tv series. It is always good and funny with characters you cannot to fail to warm to. It is a long running series based on the married young couple Doug and Carrie who live in Queens with Carrie's dad Arthur who is very funny.
Doug is a courier and the show often includes all the fun he has with his pals from work.
You can't really fault this show. It is really great.