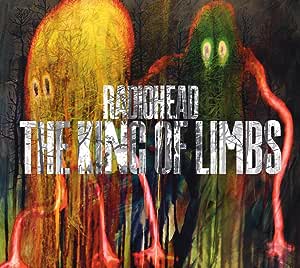 The King of Limbs

2011 release, the eighth album from the enormously successful and influential British band. As usual, the album was produced by longtime co-hort Nigel Godrich. Recorded on and off throughout 2010, the album is a cohesive collection of songs that were laid down by the band in a more relaxed fashion than their ambitious In Rainbows long-player. The album's title refers to an oak tree in Wiltshire's Savernake Forest, thought to be 1,000 years old.

abui_123
5つ星のうち5.0 Amazing..too marvelous for words
2011年10月25日に日本でレビュー済み
Amazonで購入
This album is still getting better every time. I do' now love every single track, it flows well and is pure and compact. Thank you, radiohead <3
続きを読む
7人のお客様がこれが役に立ったと考えています
役に立った
違反を報告
レビュー を日本語に翻訳する

MAC
5つ星のうち5.0 The King of Hymns To Heterodoxy
2020年9月15日に英国でレビュー済み
Amazonで購入
Look, let me get to the chase right? This is a great album. It is a Radiohead album and I am a Radiohead fan - one who blubs every time he sees them live because I just can't believe something so good exists in these times.

Since 'Kid A' and 'Insomniac', Radiohead having been kicking against fan and industry expectations with stuff that challenges their fan's and dominant music business orthodoxies.

We should be used to this by now, OK?

Who knows, one day there might be another 'The Bends' or OK Computer' - but really? Is that what you want? For your favourite band to be a like a safe Hollywood remake or sequel? Uuuugh! No thanks!

'Bloom' - what band would (except perhaps yours truly) put a track on (a first track BTW), where there is a real disruptive drum beat bashing away at the centre of a much slower 'real' tempo (actually to my ears created by the bass guitar) accompanied by soaring synths and vocals?

'Little by Little' - OK - so the guitar is not super distorted a la 'The Bends' - but what a sinewy guitar riff that is - the sort of riff you come across when you are noodling about with the instrument (and the boys in Radiohead do noodling for a living remember).

'Feral' - sorry - I don't like this. On nearly every album Radiohead there has been a track on it I just can't get on with. I love Beethoven too but his 2nd Symphony is simply lost on me. Sorry, but it happens.

'Mr Magpie' - look! Guitars! Great edgy riff and no Pro-Co Rat pedal in sight either. (Yes, I know it comes before 'Feral). Compelling.

'Codex' - well, after the above, here is the cool shower. Languid, liquid piano chords with some brass instruments and a strung out slow mo' vocal soars into calmness. Lovely and special.

And just when you think it could not get any more 'lovely and special' than that, in comes 'Give Up the Ghost' . It starts off innocently enough - very simple chord change, but then Yorke's vocal prowess asserts itself with one of those tight-trousered high pitched vocal renditions that reminds us who He and They are. It's an ethereal , delicate folk song using his own vocal samples as a backing instrument to the main song, building up to a lovely sustained release that subsides gently. It's indecently good.

But for me, the highlight of the album is 'Separator'. This song is like a long dark night, topped off by a beautiful, rosy fingered dawn. It starts almost like an electronic grumble accompanied by an edgy drum beat. To begin with you can't tell whether its in the minor or major mode (happy or sad) - the tonal centre is neutral. But then the guitar gently kicks in (yes! Guitar!) and the song changes (just recalling it now as I write makes the hairs on the back of my neck stand up) and we are lured into this beautiful, plaintive new part of the song.......and so it ends. Serenely.

So what are you into? Orthodox or heterodox? Do you want everything easy and same as? Or do you want to roll with the band as they mature as creative musicians and weave different genres together to make something new? If you like Pablo, OK Computer and The Bends, well keep listening to 'em and leave it at that.

So for me the question posed by 'The King of Limbs' is not whether or not Radiohead are still a creative force.

The question is, if you as a fan, are up to it?

Dr Sardonicus
5つ星のうち5.0 widely underrated
2014年4月2日に英国でレビュー済み
Amazonで購入
I am somewhat puzzled by several people’s reactions to this album. Perhaps these stem from the fact that it is not as instantly appealing as 'In Rainbows', but that to me is part of its charm (and just goes to show that you shouldn’t judge an album on just a couple of listenings). To my mind it is only after repeatedly listening to it that the magic of TKOL becomes apparent. I think this comes from the multi-layered arrangements, and especially from the deceptively simple drum patterns. (In a Mojo interview after In Rainbows was released, Phil Selway commented that with the band’s turn to electronica and use of programming after OK Computer he feared he was becoming redundant. It is thus ironic that, with a partial return to electronica, one of the highlights of this album is Selway’s drumming.) From the minimalist piano intro to ‘Bloom’ to the gorgeous and multilayered ‘Give Up the Ghost’, this is by my standards simply a superb album; in ‘Codex’ it contains an exceptional piano-based ballad as good as earlier Radiohead examples of this genre (e.g. ‘Pyramid Song’, ‘Sail to the Moon’), and others tracks as good as anything in their back catalogue. All I can say is, if you’ve been put off by other people moaning that it’s not as good as In Rainbows (or for that matter people who haven’t ‘got’ Radiohead since The Bends or OK Computer), ignore them and give it a go. If you already own it and don’t play it, get it out again and listen more carefully.
続きを読む
21人のお客様がこれが役に立ったと考えています
違反を報告
レビュー を日本語に翻訳する

I was a bit sceptical about this album, because of all the negative reviews, saying this is their Worst album.
So I went on you tube an listened to a few tracks. An brought it after enjoying the first track in bloom, which is amazing by the way. I wish there was a hour long version of that lol.

I have really enjoyed the album, an frankly I can not understand what people are talking about. This is a good album, I enjoy all the Radiohead albums an this is not a bad one.
I like to think of all the albums as children, they are all unique, an they have their own qualities. But you love them all the same, and I could never hate any of them.

My only gripe is that it’s a bit short, but that’s the only negative, I can think of about this album.

Funny, the track Give up the ghost makes me think of My Morning Jacket.
An the song Lotus Flower is really great too, but go an watch the video its epic lol.

But yeah, if you love Radiohead get this album, it deserves a place in your collection.

Don’t listen to all the haters go buy it an enjoy!!
続きを読む
1人のお客様がこれが役に立ったと考えています
違反を報告
レビュー を日本語に翻訳する

Big Green Elk
5つ星のうち2.0 Oh dear
2020年5月5日に英国でレビュー済み
Amazonで購入
Long-term Radiohead fan here. Bought this out of curiosity, having avoided buying In Rainbows after hearing bits of it (it's OK, but sounds like the band treading water for the first time in their career). This, their next album, is almost pointless. There are a couple of nice musical ideas tucked within, but the majority of the album comprises directionless grooves based on one-chord riffs. Fine if that's the direction they wanted to go in (and after all, artists shouldn't stagnate), but personally, Radiohead can offer so much more. The King of Limbs sounds like it was phoned in by disinterested, distracted musicians - whose last truly great album turns out to have been Hail to the Thief. Do I dare dip a toe in the Moon-Shaped Pool?
続きを読む
違反を報告
レビュー を日本語に翻訳する

Mbdaniel
5つ星のうち4.0 Limb of Vinyl
2018年3月10日に英国でレビュー済み
Amazonで購入
the review of the music has been covered many times, there is not a lot to add to those already there. With this album there will be dos and downs of sound, but for the vinyl this does give a better dynamic with better musical information offered to the ear in the recording over other versions. So buy the vinyl over the others......... One for Amazon though, can I have the TICK001LP version as this was advertised as and not the 2016 reissue!!!! Amazon are now getting themselves in a real pickle on reviews, (vinyl reviews need to be with vinyl versions etc), and know which version is stacked on their shelves before posting!!!!!!
続きを読む
2人のお客様がこれが役に立ったと考えています
違反を報告
レビュー を日本語に翻訳する
すべてのレビューを参照します
Amazonプライム会員ならお急ぎ便、日時指定便が使い放題
さらに、映画もTV番組も見放題。200万曲が聴き放題 。クラウドに好きなだけ写真も保存可能。
> プライムを無料で試す