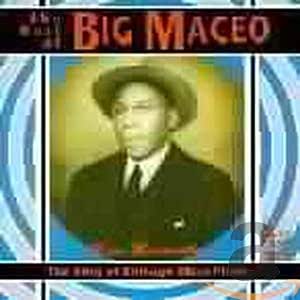 (Budget priced 4-CD box set) (This item is due 3/3/06) The majority of well-known migrating bluesmen made their recording debut after their move to a city - Muddy was first captured on tape in rural Mississippi in 1941 and '42 by Alan Lomax. Folk Lyric. 2006.

The indispensible cut here is "Chicago Breakdown", three minutes of the most powerful and inventive boogie piano ever recorded. And though Tampa Red doesn't get a solo on "Breakdown", his tasty guitar licks enhance Maceo's virtuosity.

Maceo is also a superb vocalist. "Maceo's 32-20", his version of "44 Blues", is arguably the best version of this blues anthem. "Waintertime Blues" is equally wonderful, and the only criticism I'd make of the selections is that on the earlier sessions there's Tampa and Maceo haven't worked out their style as fully as on the later ones. "Texas Stomp" is jive-talking for the ages, and "Worried Life Blues" is archetypal.

Fred Camfield
5つ星のうち4.0 Big Maceo Merriweather, piano and vocals, with Tampa Red, guitar
2012年10月17日にアメリカ合衆国でレビュー済み
Amazonで購入
Big Maceo Merriweather (1905 - 1953) was born in Newnan, Georgia, and grew up in the Atlanta area, before moving to Detroit when he was 19. He learned to play piano on his own, starting when he was a teenager, and played at various clubs and house parties. He went to Chicago, circa 1941, and hooked up with Tampa Red, and with Lester Melrose who was a talent scout. He made his first recordings in 1941, and continued recording through 1952. His piano playing was cut short by a stroke in 1946, which affected he right side and limited ability to play. He died in early 1953. The present CD includes sides recorded between June 1941 and October 1945 when he was at the peak of his career. Total playing time is over an hour. The sides were recorded when the vinyl 78 rpm sides were limited to about three minutes maximum. The 25 tracks included are:

12. Anytime For You (with instrumental break)

13. My Last Go Round (with instrumental break)

15. Kidman Blues (jazzier than the other tracks)

16. I'm So Worried (with instrumental break)

17. Things Have Changed (with instrumental break)

18. My Own Troubles (a little jazzier with instrumental break)

22. Detroit Jump (another jazzy instrumental with some talking, similar to track 20)

Big Maceo, Tampa Red, and Sanders on tracks 23 through 25