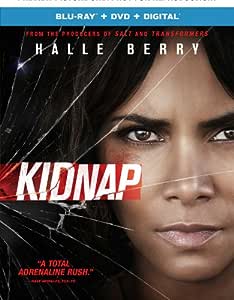 Rich Whitcomb
5つ星のうち5.0 You messed with the wrong mom!
2017年11月2日 - (Amazon.com)
Amazonで購入
Karla Dyson (Halle Berry) is a divorced mother trying to make ends meet and not lose custody of her son who she loves most in the world! One day she takes her son Frankie (Sage Correa) to the park to have some fun. Karla gets a phone call while they're at the park and tells Frankie to stay put and not to move. While on the phone she plays Marco Polo to make sure he's still there. Frankie answers several times, but then stops. Karla thinks he's playing around and goes back to the spot where she left him, but he's not there. While trying to keep herself calm she still can't find him and starts to panic. She starts running through the park and sees the recorder Frankie plays with and then all of a sudden she sees her son being dragged into a stranger's car. She runs after the car, but the doors are locked and can't do anything. Karla gets in her van and the chase begins! This is a very suspenseful, thriller that deserves nothing less than 5 stars! You will be on the edge of your seat the entire time thinking about what she should do and what you would do! I don't want to say anymore and ruin this movie, but whether you rent or buy this, I guarantee you won't be disappointed!
続きを読む
20人のお客様がこれが役に立ったと考えています
レビュー を日本語に翻訳する

Arthur Hervey
5つ星のうち4.0 Bad movie compared to which other movies?
2017年11月18日 - (Amazon.com)
Amazonで購入
Been watching movies for 50 years. Seen all the plots and pretty much know whats coming next. This one I liked. I sat and watched it with a mom and she LOVED it! I hadn't seen this kind of plot before and it was refreshing how they developed the story. Those who gave this a bad review I'd like to ask them to give me a better comparison movie to go by as a reference. I have seen them all. I took away one star because I thought the ending could have been more creative and should have included at least a scene of the other parents getting their kids back while Halle's character looked on with her son.
続きを読む
7人のお客様がこれが役に立ったと考えています
レビュー を日本語に翻訳する

Sam's-Review
5つ星のうち5.0 Never Come Between a Mom, her Child and a Minivan!
2017年11月14日 - (Amazon.com)
Amazonで購入
Wow…talk about the mom from HELL…and you won’t look at a minivan in the same way again!

The legendary “Halle Berry” (one the most beautiful Black Woman on the planet) gave and incredibly intense performance in this “child abduction” movie. Driving the minivan from hell…Halley Berry demonstrates that you don’t come between a mother and her child.

My take on this movie: I watched this movie out of boredom, and was pleasantly surprised at how good it actually was. This movie hits (zero) 0 to 60 in the first 15 minutes and goes hardcore. I was even a little caught off guard by the brazen ass-kicking action! The story of course will have a suspenseful ending. Great movie!

David-Mark Z.
5つ星のうち5.0 This one is a keeper. Well done.
2017年11月25日 - (Amazon.com)
Amazonで購入
I’ll keep this short and sweet. Just like the other reviews if you just relax and let the chips fall where they may and not mind that there may be unbelievable things that happen in this movie then you might just enjoy this. I did.

If you try to predict what the most sensible thing the main character should do in whatever situation that occurs in this movie, well then, there would be no movie. Because it would be over soon.

I thoroughly enjoyed this movie for what it is. Halle Berry is what makes this movie tick. Just leave logic out the window (for just 80 minutes) and just enjoy this movie. A well crafted movie to get your anger juices flowing.
続きを読む
5人のお客様がこれが役に立ったと考えています
レビュー を日本語に翻訳する

Opal
5つ星のうち4.0 It's about time!
2017年11月4日 - (Amazon.com)
Amazonで購入
I agree with others.. ignore negative reviews. This movie is a warning to any kidnappers out there. You take my child, I will pursue you and do whatever is necessary, till I get my child back. There's only a couple things I would have done differently, but basically she was one tough mother. The love for her child outweighs any risk to herself and it shows!
続きを読む
5人のお客様がこれが役に立ったと考えています
レビュー を日本語に翻訳する
Amazon.comのカスタマーレビューを見る(645) 5つ星のうち4.2
Amazonプライム会員ならお急ぎ便、日時指定便が使い放題
さらに、映画もTV番組も見放題。200万曲が聴き放題 。クラウドに好きなだけ写真も保存可能。
> プライムを無料で試す