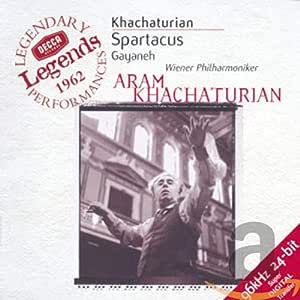 Khachaturian's popular ballet scores benefit from his vigorous leadership and the surprisingly idiomatic playing of the Vienna Philharmonic. All the favorite crowd-pleasers are here, including the Sabre Dance. This pairing of ballet suites was a demonstration disc back in LP days and the engineering is still impressive. For those not on Khachaturian's wave length (he does skate perilously close to kitschy vulgarism), the generous filler is a delight--Ansermet's dynamic account of Glazunov's ballet. Its four movements depict the four seasons in an idiom flavored by Tchaikovsky and Glazunov's teacher, Rimsky-Korsakov, and the music's all the more fetching for it. Ansermet sometimes could be a bit too sedate, and his orchestra was never a world-class group, but his conducting is nothing short of vivacious here, and the orchestra, captured in vivid sound, is with him all the way. --Dan Davis

Mr. M. A. Crown
5つ星のうち5.0 Some Fine Music, Beautifully Reproduced
2020年4月17日に英国でレビュー済み
Amazonで購入
The first thing to say is that I cannot believe these recordings date back to the 1960's - the quality of audio reproduction is really high.

I bought this CD to hear Khachaturian's music but Glazunov's music does not disappoint with its folk-like rhythms.

The music for Spartacus is fantastic, with the use of volume swells captured really well.

The stand out piece for me though is 'Gayaneh's Adagio' - a sparsely beautiful piece of modern classical music that should be heard more in my opinion and not just when you watch '2001 A Space Odyssey'.

Presentation of the CD is great too, with the original front cover on the back of the CD booklet and the CD itself presented like an old audio tape reel - the sort the original would have been recorded on. A nice touch.

I. Giles
5つ星のうち5.0 Much improved sound for a fondly remembered and popular disc
2013年7月29日に英国でレビュー済み
Amazonで購入
This disc brings Khachaturian's 1962 recording of the Spartacus and Gayaneh selections with the VPO which, after a very slow start, suddenly achieved massive popularity by being the recording used for the enormously popular and long running Onedin line series on television. This has been generously coupled with the Ansermet recording of Glazunov's 'Seasons' made in 1965.

As with the rest of these re-mastered discs, the improvement in sound quality is very marked with the greatest improvements being with the older recordings. The reality is that early CDs simply did not have the capability of containing the full musical signal which had been achieved via analogue recordings since the 1950's. An example of convenience over substance similar to camera phones relative to good quality 'traditional' digital cameras and mp3 players compared to separates and large speakers etc. That backwards sonic move has now been rectified with the much greater capabilities of these higher bit rate transfers.

As a result there is greater dynamic range, tonal range, sound-stage and general 'presence' to be readily heard. The better the replay equipment the more this will be apparent.

All the music on this disc falls easily on the ear and is well performed. Ansermet was much appreciated as a ballet conductor so those skills are appropriate to Glazunov's balletic style of writing in this extra set of pieces.

In conclusion I would suggest that for those who are already fond of these performances, the upgrade is certainly worth considering. For those new to these pieces, the disc offers very good musical and sonic value and still competes well with other recordings of the same repertoire despite its greater age.

Andrew J
5つ星のうち5.0 Never will be bettered.
2017年4月7日に英国でレビュー済み
Amazonで購入
Reference performances from both Conductor and Orchestra (VPO) that will never be bettered and should be in every serious CD collectors library.

Full marks to Decca for the latest remastering, sensational improvement over previous incarnations. The sound is superb and belies the recordings date from 1962. At this price you don't have to think twice.

Sam the dog
5つ星のうち5.0 Grecian heaven
2015年9月26日に英国でレビュー済み
Amazonで購入
There's something so very special about this recording. The presence of the composer can almost be felt. The Vienna Philharmonic extract every last emotional twist from the famous Adagio. One of the few cathartic moments that brings tears to my eyes on disc, they absolutely nail every climax. Recording quality is superb. Bravo, bravo, bravissimo!!!
続きを読む
1人のお客様がこれが役に立ったと考えています
役に立った
フィードバックを送信中...
フィードバックをお寄せいただきありがとうございます。
申し訳ありませんが、お客様の投票の記録に失敗しました。もう一度試してください。
違反を報告
レビュー を日本語に翻訳する

William
5つ星のうち5.0 Decca at its best
2018年11月26日に英国でレビュー済み
Amazonで購入
I have the original LP versions n of the Khachaturian which was good, but this remastering by Decca is amazing. The sound is so dynamic, hard to believe it's 56 years old. Superb dynamic range & a great buy.
続きを読む
役に立った
フィードバックを送信中...
フィードバックをお寄せいただきありがとうございます。
申し訳ありませんが、お客様の投票の記録に失敗しました。もう一度試してください。
違反を報告
レビュー を日本語に翻訳する
その他の国際レビューを読み込む

Andrew Cole
5つ星のうち5.0 1962 Sparticus
2014年3月24日にカナダでレビュー済み
Amazonで購入
I loved this CD. I am a fan of the Russian Classics and while Aram Khachaturian was not Russian but I believe Armenian, It is a fantastic addition. The Adagio of Spartacus and Phrygia is wonderful. Popularized in the 70's show The Onedin Line.
続きを読む
役に立った
フィードバックを送信中...
フィードバックをお寄せいただきありがとうございます。
申し訳ありませんが、お客様の投票の記録に失敗しました。もう一度試してください。
違反を報告
レビュー を日本語に翻訳する