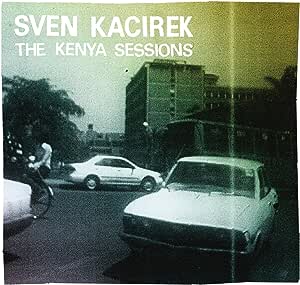 Pingipung presents „The Kenya Sessions“ - an enchanting cooperative mission featuring Sven Kacirek, our experimental drummer and electronic producer, and musicians from Kenya. "The Kenya Sessions" is the result of Sven's extended visit to the country with live and fieldrec sessions which he later processed in his studio in Hamburg. Sven Kacirek plays with local Kenyan stars such as 80 year-old female vocalist Ogoya Nengo, or with Joseph Oganga, who delivers amazing patterns with his „Nyatiti“, a traditional string instrument. It's sometimes difficult to tell the parts recorded in Kenya from those overdubbed by Sven Kacirek himself. His own compilation of Marimba, Bassdrums and brush patterns forms a musical thread that he weaves skillfully into the live sessions. At times joyfully straight (Arsenal Aluny Vilage) at times mellow and melancholy (Mariae, Paperflowers). Sven Kacirek and some of the Kenyan musicians will bring this fantastic material on international stages in early 2011. The Linernotes by Goetz Steeger illustrate the detailed recording process of this record. „The Kenya Sessions“ is Pingipung's second album by Sven Kacirek who has a background as virtuoso jazz drummer.

Scott Muncy
5つ星のうち4.0 A labor of love overlapping two disparate worlds; sonically and geographically.
2018年3月26日にアメリカ合衆国でレビュー済み
Amazonで購入
When Western musicians seek to collaborate with, reinterpret the works of, or create a hybrid form of music resulting from recording with indigenous peoples across the globe, there’s an inherent risk that it will spark cries of cultural imperialism or musical colonialism. Sven Kacirek, veteran drummer and electronic producer must have been cognizant of the risk when he took on this project at the behest of the Goethe-Institut. Kacirek travelled to Kenyan outliers seeking out those locations where musicians of local renown could be found and recorded. After amassing five-weeks of recordings, Kacirek returned home where he added marimba, bass drums and brush work and the result is a sublime and understated masterpiece of empathetic listening and respect, all the while maintaining a desire for something new and as-yet unheard. Kacirek skillfully incorporates his contributions to the main Kenya framework which allows the source material of the field recordings to be positioned at the fore. The detailed liner notes recount where Kacirek’ journey took him and the wealth of stylistic diversities that can be heard from track to track is fascinating. A warm reminder of what happens when disparate musical ideas are approached with love and care. Impeccably assembled and rendered, and a warm, intimate record with a genuine regard for the culture from which it sprang.
続きを読む
違反を報告
レビュー を日本語に翻訳する
すべてのレビューを参照します
Amazonプライム会員ならお急ぎ便、日時指定便が使い放題
さらに、映画もTV番組も見放題。200万曲が聴き放題 。クラウドに好きなだけ写真も保存可能。
> プライムを無料で試す