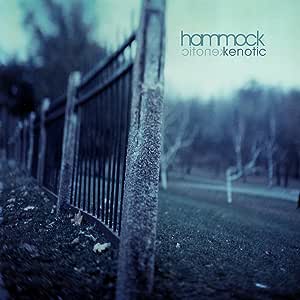 Hammock's debut released February 2005. Hailed for its emotional resonance & masterful melding of ambient shoegaze & electronic. Hammock's debut Kenotic is in every way a contender for classic status in the shoegazing genre. -All Music Guide. This is not simple drone music; it's complex sophisticated & dense but it's also not alienating pseudo-intellectual or moribund...Hammock make music \nthat is filled with human emotion & passion... -Wind & Wire. Hammock \nare a

Kabalabonga
5つ星のうち4.0 A Place To Lay Awake At Night Stargazing
2011年2月26日にアメリカ合衆国でレビュー済み
Amazonで購入
Some reviewers have used Windy and Carl as a reference point for the sound Hammock achieves on "Kenotic", though guitarist Carl Hultgren often makes use of extensive effects to create a musical texture sounding as if he's levitating fragments of exploded notes within a whirling funnel when he's not crafting heavily distorted, expansive, tonally elongated drones that occasionally sound as if he's channeling the submerged roar of the universe in a tuneful fashion. Hammock's sound is sometimes levitational, often shimmering and textured around gentle, atmospheric, sometimes glacial droning, but not as vast,infinite and ascendant as what Windy and Carl are capable of producing.

With that being said, "Kenotic" was something of a pleasing revelation. The tracks on this release are for the most part guitar-driven ambient pieces, with a richly evocative, languid smoothness (that occasionally displays some moodiness) achieved through cascading washes of reverb, echo and delay delivered in a primarily mid-tempo range. It's richly textured and often carries a sense of tranquility (though in some places almost oppressive), with only a moderate amount of percussive accompaniment (surfacing most prominently on "What Heaven Allows") and extremely minimal vocalization to interfere with the subtle, meditative undercurrent that characterizes many of the cuts on this CD. "Kenotic" will probably appeal to fans of Windy and Carl on general principles (though will not match that band's ability to create expansive soundscapes), but is probably not going to appeal to those listeners who like their music rooted in heavy, blistering drones. For what it does do on its own terms I can definitely recommend it.
続きを読む
1人のお客様がこれが役に立ったと考えています
違反を報告
レビュー を日本語に翻訳する

MG
5つ星のうち5.0 AS I LAY DREAMING...
2005年11月20日にアメリカ合衆国でレビュー済み
Amazonで購入
Kenotic charms the listener with gauzy, textural pieces alternating with more rhythmic, foward moving numbers. What really sets Hammock apart from all the other bands of this genre are the great single note and chordal guitar hooks dispersed throughout this excellent disk.

Kenotic is reminiscent of the timeless sounds of the amazing bands of the mid to late 90's Michigan scene. Early Windy and Carl and Auburn Lull come to mind. This is not to say that Hammock have not forged their own blissful sound, because they certainly have.This CD is ample proof.
続きを読む
3人のお客様がこれが役に立ったと考えています
違反を報告
レビュー を日本語に翻訳する
すべてのレビューを参照します
Amazonプライム会員ならお急ぎ便、日時指定便が使い放題
さらに、映画もTV番組も見放題。200万曲が聴き放題 。クラウドに好きなだけ写真も保存可能。
> プライムを無料で試す